Who is Hubert de Givenchy?

Hubert de Givenchy, iconic French fashion designer and founder of the House of Givenchy, died on March 10, leaving a gaping hole in the fabric of international couture and fashion. He was part of the elite cadre of Paris-based designers, including Christian Dior and Yves Saint Laurent, who redefined fashion after World War II. Hubert de Givenchy, the iconic French fashion designer, is known for his classic designs and for styling women like Audrey Hepburn and Jacqueline Kennedy. He died at the age of 91. (Source: AP)

On Monday, March 12, the world of fashion suffered a huge loss with the passing away of iconic French fashion designer Hubert de Givenchy. Founder of his eponymous fashion brand, Givenchy, the couturier was known for creating the much-loved ‘little black dress’ for his muse and friend Audrey Hepburn, and being a huge favourite with women in high positions of power, such as the Queen of England Elizabeth II, Princess Grace of Monaco, the Duchess of Windsor, Jacqueline Kennedy (of course), Jane Fonda and Babe Paley, among other world dignitaries.

“It is with huge sadness that we inform you that Hubert Taffin de Givenchy has died,” his partner Philippe Venet said in a statement to AFP. The official Twitter account of the label tweeted: “The House of Givenchy is sad to report the passing of its founder Hubert de Givenchy, a major personality of the world of French Haute Couture and a gentleman who symbolized Parisian chic and elegance for more than half a century. He will be greatly missed.”

The artistic director of Givenchy, Clare Waight Keller, said on her official Instagram account she is “deeply saddened by the loss of a great man and artist I have had the honor to meet… Not only was he one of the most influential fashion figures of our time, whose legacy still influences modern-day dressing, but he also was one of the chicest most charming men I have ever met.” 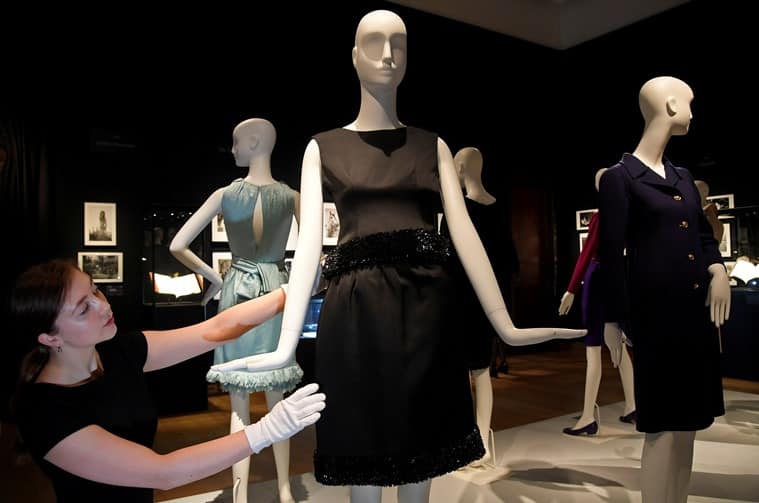 An employee poses as she adjusts a Givenchy cocktail gown worn in the film Charade in 1963 by Audrey Hepburn, and one of the actresses personal collection to go on pre-sale exhibition ahead of its auction on September 27 at Christie’s in central London, Britain September 22, 2017. (Source: Reuters)

A towering man with impeccable manners, he forged close friendships with his famous clients, among them Elizabeth Taylor, Jackie Kennedy and Princess Grace of Monaco.

Born into an aristocratic family in the provincial city of Beauvais on February 21, 1927, Count Hubert James Taffin de Givenchy was the younger son of the marquis of Givenchy Lucien Taffin de Givenchy and his wife Beatrice. At the age of 17, he relocated to Paris to study at the Ecole des Beaux-Arts.

His design journey started in 1945, he went on to work for Pierre Balmain, Christian Dior and Elsa Schiaparelli, before starting his own label in 1952. A year later, he met Hepburn on the set of the Billy Wilder’s Oscar-winning comedy Sabrina, which formed the genesis of a friendship that would span four long and successful decades. It was this association that many say led to his becoming a fashion legend. Hepburn also inspired his first perfumes L’Interdit and Le de Givenchy. He even designed what is regarded as the most famous ‘little black dress’ for her in the film Breakfast at Tiffany, though his Parisian rival Coco Chanel is credited with inventing the LBD. 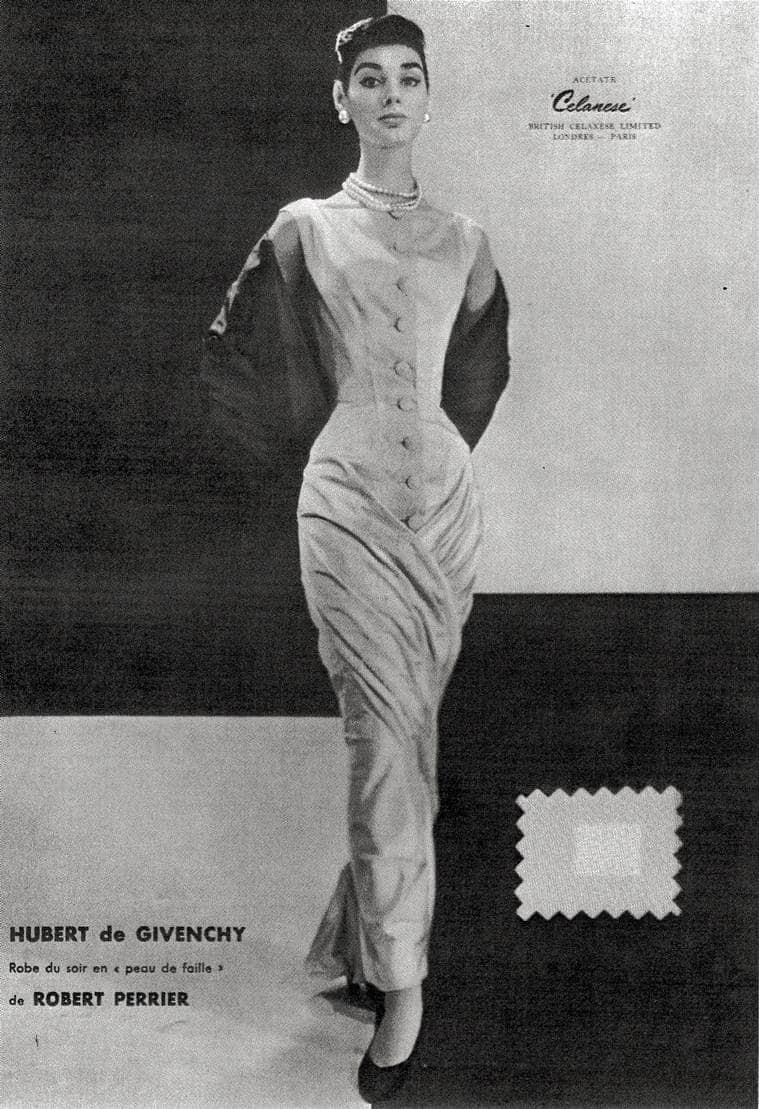 Givenchy was part of the elite cadre of Paris-based designers, including Christian Dior and Yves Saint Laurent, who redefined fashion after World War II, and a favoured pupil of design legend Cristóbal Balenciaga Eizaguirre. Unlike the decorative work at Dior, Givenchy’s designs were innovative and chic, which set the fashion template for women in the 1950s and 1960s. It is this restrained style that continued to endear his creations to the royalties and socialites of the world. His illustrious list of patrons included the Queen of England Elizabeth II, Princess Grace of Monaco, the Duchess of Windsor, Jacqueline Kennedy (of course), Jane Fonda and Babe Paley, among other world dignitaries. In this February 1, 1952, file photo, French fashion designer Hubert de Givenchy poses with mannequins in his shop in Paris. French couturier Hubert de Givenchy, a pioneer of ready-to-wear who designed Audrey Hepburn’s little black dress in “Breakfast at Tiffany’s,” has died at the age of 91. (Source: AP)

“He was among those designers who placed Paris firmly at the heart of world fashion post 1950 while creating a unique personality for his own fashion label,” according to a statement released by LVMH, which now owns Givenchy.

Givenchy ready-to-wear collection debuted in 1954, and de Givenchy went on to create the iconic ‘Balloon coat’ and the ‘Baby Doll’ dress in 1958. The men’s line was launched in 1969. Many collaborations later, in 1981, the House of Givenchy was split with the perfume line going to Veuve Clicquot, and the fashion brand being bought over by the European firm LVMH Moët Hennessy Louis Vuitton SE for reportedly $45 million. It went on to acquire Givenchy Parfumes later too. 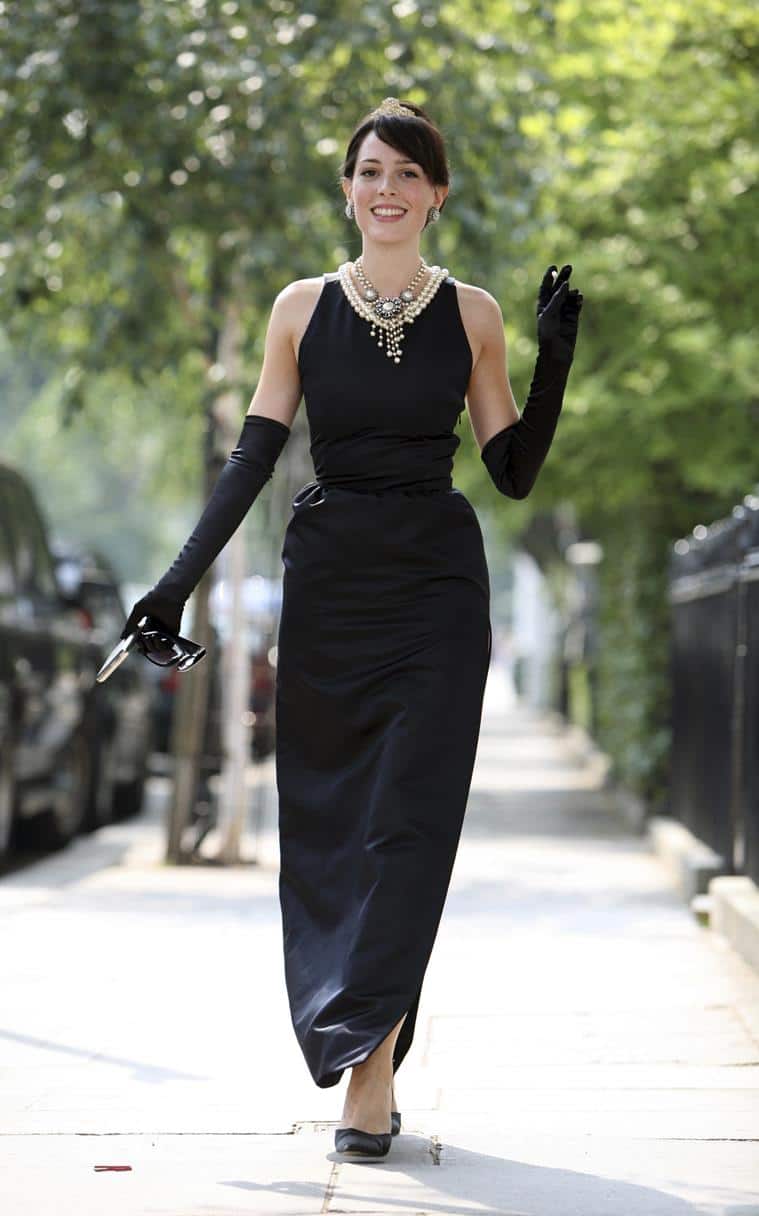 In this July 26, 2006, file photo, model Romilly Collins wears the black Givenchy dress made for actress Audrey Hepburn in the classic 1961 film “Breakfast at Tiffany’s” in central London. (Source: AP)

Givenchy retired from the business in 1995, and the brand was helmed by designers such as John Galliano, Alexander McQueen, Julien Macdonald, Riccardo Tisci and finally Clare Waight Keller, the brand’s first female artistic director, in 2017.

Givenchy is survived by his partner Venet, his nephews and nieces, and their children.