Anti-Sterlite protest: With hundreds of residents and social activists raising their voice against the copper unit in Tuticorin, the situation in the city is very critical and there is a heavy deployment of police. Police personnel tackles the agitators demanding the closure of Vedanta’s Sterlite Copper unit as the protest enters the 100th day, in Tuticorin, on Tuesday. (PTI Photo)

Tension gripped the coastal city of Tamil Nadu as agitators in Tuticorin, nearly 600 km from Chennai, clashed with police protesting the proposed expansion of a copper smelter of Sterlite Copper, a unit of the Vedanta group, over pollution concerns. At least nine people have been killed and several others critically injured in the clashes with police. With hundreds of residents and social activists raising their voice against the copper unit, the situation in the city is very critical and there is a heavy deployment of police.

What is the Tuticorin copper plant?

The copper unit in Tuticorin has the capacity to produce 400,000 tonnes of copper cathode a year. It is run by Vedanta’s Sterlite Copper unit, controlled by Vedanta Limited. It is owned by Anil Agarwal who kicked off his business career as a scrap dealer from Bihar. The unit in Tuticorin was shut down on March 29 this year for 15 days for ‘maintenance work’. The company plans to double its production, increasing it up to 800,000 tonnes of copper cathode per year. Why are the residents protesting against the copper production unit?

Residents have been protesting for the immediate closure of the unit since February this year. They allege that the pollution generated by the unit has contaminated the water bodies in the region, claiming that they are facing severe health problems. Environmental activists have also expressed concern since copper smelting leads to various kinds of pollution and they must be located far away from the residential areas.

Sterlite Copper’s response to the protest

Responding to the allegations against it, the company said that the plant has received necessary permits and has not violated any norms. A report in The Economic Times quotes P Ramnath, CEO of Sterlite Copper as saying, “the company had offered to open its gates for people to see for themselves than believe rumours and half-truths.”

However, the offer was turned down by activists insisting that it was not what happened inside the factory, but the environmental damage caused by it.

Political leaders on the ongoing situation

Various political figures have raised concern over the violence and have condemned the ongoing situation in Tuticorin. DMK working president and Leader of Opposition in the state assembly M K Stalin condemned the “police atrocities” that took place. Actors Kamal Haasan and Rajinikanth, who recently announced their entry into politics, have also expressed solidarity with the protesters and demanded that the ruling AIADMK government in Tamil Nadu take action. Kamal Haasan, the founder of Makkal Neethi Mayyam was quoted by PTI as saying: “The expansion (of Sterlite Copper) should not at all be allowed. If possible it will be good to close down the (existing) unit.” 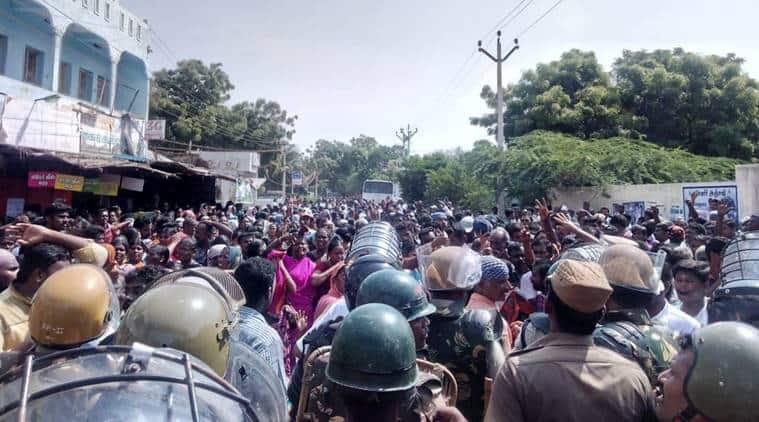 Nine people have so far been reported dead in the clashes with police. (Source: ANI)

He added, “What is the necessity to put up the plant near residential and agricultural zone? …to say that the location is close to the port is not acceptable.” Congress President Rahul Gandhi termed the protest as ‘a brutal example of state-sponsored terrorism’. The Congress leader in a tweet said, “The gunning down by the police of 9 people in the Sterlite Protest in Tamil Nadu, is a brutal example of state sponsored terrorism. These citizens were murdered for protesting against injustice. My thoughts & prayers are with the families of these martyrs and the injured.”

The gunning down by the police of 9 people in the #SterliteProtest in Tamil Nadu, is a brutal example of state sponsored terrorism. These citizens were murdered for protesting against injustice. My thoughts & prayers are with the families of these martyrs and the injured.

Appealing people to maintain peace, the chief minister ordered constitution of a one-man commission under a retired high court judge to investigate the incident. He also announced a compensation of Rs 10 lakh to the families of each of those killed, Rs 3 lakh to those seriously injured, and Rs 1 lakh for people who suffered minor injuries.