Mumbai rains, Weather forecast Today HIGHLIGHTS: The rains played a spoilsport in the Ganeshotsav in Mumbai on Tuesday as it increased traffic woes for the residents who had ventured outside their homes for Ganesh Visarjan.

The IMD has predicted intense rain in Mumbai and the surrounding areas in the next 24 hours. (Express photo by Prashant Nadkar)

Mumbai rains, Weather forecast Today HIGHLIGHTS: The India Meteorological Department (IMD) issued a ‘red alert’ asking the authorities to be prepared to handle any situation. The department has predicted intense rain in Mumbai and the surrounding areas in the next 24 hours. Electricity supply to various parts of the city was discontinued after the Brihanmumbai Electric Supply & Transport (BEST) substations at Matunga, King’s Circle and Wadala were submerged in water. The IMD said that 100 out of the 150 weather stations in the city recorded over 200 mm rain in the last 24 hours. Andheri East in Mumbai recorded the highest rain, around 214 mm, in six hours. Andheri West, Vikhroli, Marol and Ville Parle also received record rain on Wednesday. Train services on various lines were stopped as a result of waterlogging.

People have been asked to avoid venturing near the sea or walking in waterlogged areas. Mumbai residents have been asked to call 1916 for any assistance. Overnight rains have also resulted in waterlogging and traffic disruption in Sion, Parel, King’s Circle, Dadar and Byculla. In the wake of IMD’s warning of heavy rainfall for Wednesday, all Mumbai schools shall remain closed today.

Meanwhile, a cloud cover enveloped Delhi for quite some time on Monday, rains kept city residents waiting. However, the weather department said, light showers are likely at night and on Wednesday and Thursday. Meanwhile, according to data shared by the weather agency, nearly half of the country has received excess rainfall in August, which recorded 15 per cent more precipitation than normal.

Below is a weather warning issued for various districts across Mumbai. 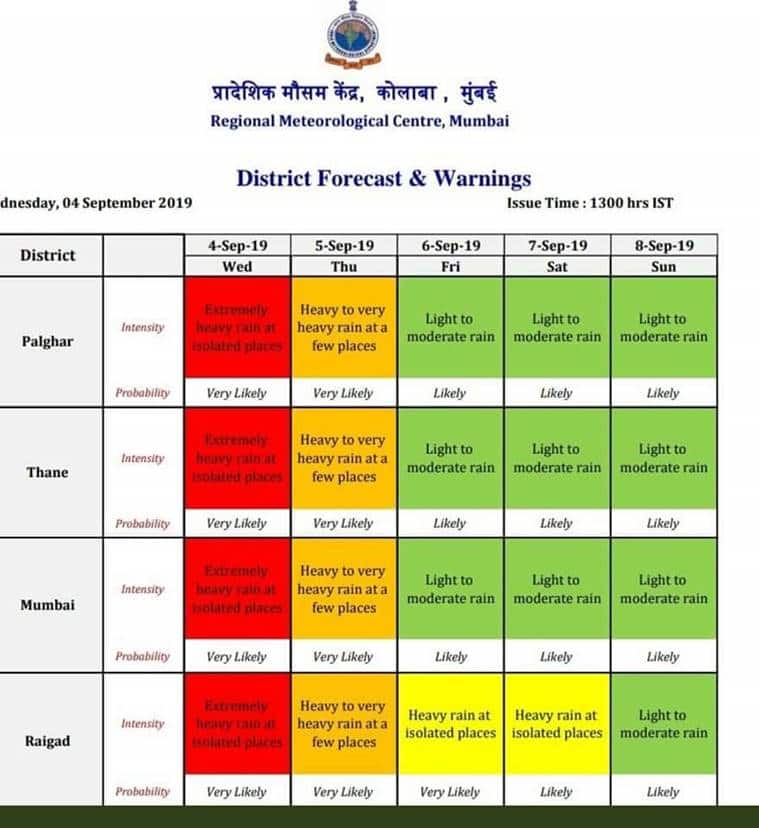 See visuals of waterlogging in Mumbai

Mumbai was waterlogged following heavy rainfall in various parts of the city during the past 24 hours. Below are the pictures of waterlogging across the city.

The Brihanmumbai Municipal Corporation (BMC) converted 145 civic-run schools into temporary shelter homes for commuters stranded at railway stations due to the heavy downpour in Mumbai.

Mumbai: Trees uprooted in Tardeo and Matunga due to rain

The Mithi river in Mumbai flowed close to its danger mark on Wednesday.

RPF team safely escorting passengers from a local between Vikhroli and Ghatkopar. pic.twitter.com/3AlDHxFUE4

Mumbai: Raigad receives over 300 mm rain in the past 24 hours

Mumbai's Raigad district received around 300 mm rain in the past 24 hours. Palghar and Thane districts received over 200 mm rainfall since yesterday.

Check the status of cancelled/ short-terminated trains in Mumbai

Below is the status of the trains which were cancelled/short-terminated and re-scheduled due to incessant rains in the city.

Long distance trains update-8 of 4.9.2019
Trains cancelled/short terminated and Re-rescheduled due to heavy and continuous rains in Mumbai area. pic.twitter.com/ewCEnKUu7M

Maharashtra government has asked the officials concerned to monitor the water inflow in dams in western parts of the state, which were hit by floods last month.

RPF team escorted passengers from a local which was held up between Sion and Kurla. They were sent to Kurla platform safely.

RPF team safely escorting passengers from a local held up between Sion and Kurla. They were sent to Kurla platform safely. pic.twitter.com/eYYDKq1rGl

Mumbai: Rain likely to continue after a break

No rainfall activity was noticed in Mumbai for the past one hour. Rain is likely to continue after a break.

Latest DWR and satellite images indicate persistence of the system over Arabian sea.
Last one hour no significant rainfall activity noticed in Mumbai and around as seen from plot.
Rainfall likely to continue after a break.
TC pic.twitter.com/O6qkuStloW

No trains are running between Churchgate and Andheri due to heavy waterlogging near Mahim and Matunga road. Train services between Andheri and Vasai Road are functional on all 4 lines at certain intervals. Trains between the Vasai and Virar stretch are not operating due to waterlogging near Nalsopara. The railways' team is assessing the water level to resume the services as soon as possible.

Mumbai: Electricity supply discontinued in parts of the city

Electricity supply to various parts of the city was discontinued after the Brihanmumbai Electric Supply & Transport (BEST) substations at Matunga, King's Circle and Wadala were submerged in water.

Train services between Chhatrapati Shivaji Maharaj Terminus (CSMT) Mumbai and Thane on the main line were stopped due to heavy rain in the region. Train operations on the CSMT-Vadala, CSMT-Andheri, CSMT-Goregaon, Vadala-Vashi on the harbour line and Belapur-Kharkopar on the 4rth corridor were also stopped. However, train services are operating on the Vashi-Panvel route, Thane-Vashi, Thane-Panvel, Thane-Kasara, Thane-Karjat, Thane-Khopoli, Nerul-Kharkopar-Nerul routes.

Several parts of Mumbai were waterlogged after heavy rainfall. Following are the pictures from King's Circle in the city.

See pictures from the rain in Kurla in Mumbai

See photos of the rain in Mumbai's Kurla

Western Railway suburban services are operational between Churchgate and Vasai Road on both fast lines. However, train services on slow lines are not running due to waterlogging near Matunga railway station.

With heavy rains pounding Mumbai and its suburbs, the weather department on Wednesday issued a 'red alert' for the city and adjoining areas and asked the authorities to be prepared to handle any situation. Out of the 150 weather stations in the Mumbai Metropolitan Region (MMR), around 100 recorded over 200 mm rainfall in last 24 hours, the India Meteorological Department(IMD) said. (PTI)

Another traffic diversion update for BEST buses plying within the city.

Weather Today LIVE: A waterlogged road after the rain at BRS Nagar in Ludhiana. (Express Photo by Gurmeet Singh)

Weather forecast Today LIVE UPDATES: Light rain occurred at some places in Himachal Pradesh as monsoon weakened over the hill-state, the Meteorological department said. Some parts of the hill-state will be lashed by rain till September 8. The IMD has also forecast another spell of heavy downpour in Odisha till September 6 due to fresh low pressure taking shape over the Bay of Bengal.

It has also forecast another spell of heavy downpour in Odisha till September 6 due to fresh low pressure taking shape over the Bay of Bengal. Odisha has already encountered heavy downpour in different spells due to four low-pressure areas formed over the bay in August. Several parts of south and west Odisha also faced flash floods and severe waterlogging due to incessant rains earlier this month.

Meanwhile, the State Emergency Operation Centre (SEOC), Uttarakhand said that rain-related incidents have killed at least 60 people in the state. Uttarkashi reported the highest number of casualties. Rescue operations are still on in the affected areas in Uttarkashi.