With the strengthening of westerlies and increase in convective clouds, the southwest Monsoon has further advanced into some parts of Maldives-Comorin area, south Bay of Bengal and remaining parts of Andaman Sea and Andaman & Nicobar Islands.

Dark clouds turned the skies grey and brought light rain in parts Delhi-NCR on Friday evening. While strong winds throughout the day had brought down the soaring temperatures across the national capital and its neighbouring areas, the Indian Meteorological Department (IMD) had predicted rains along with dust storm and thunderstorm.

The weather department on the other hand issued orange alert for Kerala’s Iddukki district just two-days ahead of the onset of monsoon in the state.  Several districts in Kerala will receive heavy rainfall righ till the weekend. A yellow alert of isolated heavy rainfall has been sounded off in Kollam, Pathanamthitta and Alappuzha on Friday. Following the alert by IMD of two developing depressions in the Arabian sea, the state government had banned all fishing activities in these waters.

Meanwhile, IMD, Pune on Thursday said that monsoon is likely to hit Maharashtra by June 8, almost eight days after touching Kerala. The pre-monsoon activities in Maharashtra is expected to start by May 30, ANI quoted Dr Anupam Kashyapi, IMD scientist, Pune as saying.

The Arabian Sea adjoining the coast of Mumbai witnessed a cyclonic circulation that is likely to bring heavy rains and thunderstorm to the city. Follow Weather LIVE updates.

Thunderstorm rain likely i parts of Karnataka including Bengaluru

The meteorological department in Bengaluru said a thunderstorm accompanied with light to moderate spells of rain and strong winds reaching 30-40 kmph is likely to affect Bengaluru, Tumkuru, Ballari, Bidar and other districts in next three hours

With monsoon arriving soon, flood alerts to begin in Mumbai

This monsoon, Mumbai city will get its own Flood Warning System, which will be able to relay alerts of possible flood-prone areas anywhere between six to 48 hours in advance.

Every year, Mumbai receives very heavy rain within a short time, which usually brings the city to a halt. Urban flooding is common in the city from June to September, resulting in the crippling of traffic, railways and airlines. In a joint initiative between the Ministry of Earth Sciences (MoES) and Municipal Corporation of Greater Mumbai, the warning system is expected to be deployed next month, as monsoon is set to enter the state by June 10. Read full story by Anjali Marar 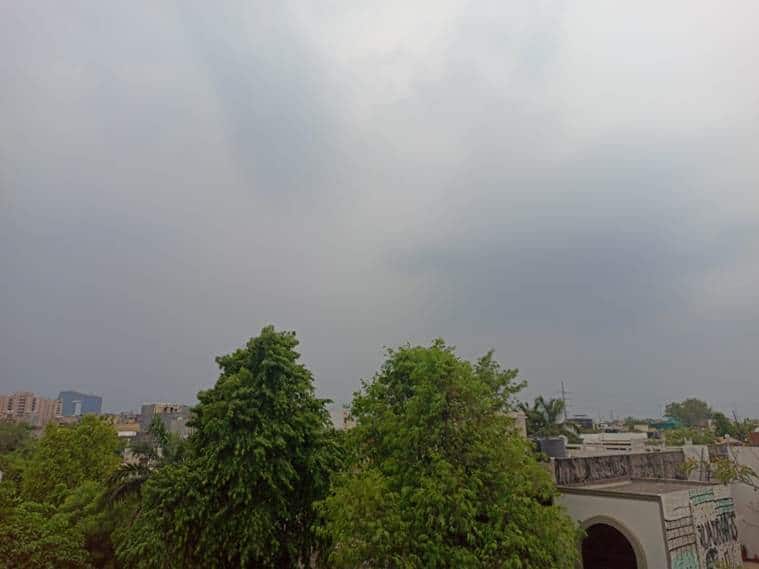 Dark clouds turned the skies above grey while strong winds brought down the soaring temperatures across Delhi-NCR on Friday. The Indian Meteorological Department (IMD) predicted light rains along with dust storm and thunderstorm in the national capital and its neighbouring cities by the evening.

Delhi to get light rain with duststorm in 2-3 hours

*The Well Marked Low pressure area over Westcentral Arabian Sea with associated cyclonic circulation extending upto mid tropospheric levels persists. It is very likely to concentrate into a Depression over the same region during next 24 hours. and likely to intensify further thereafter. It is likely to move northwestwards across south Oman & east Yemen coasts during next 48 hours and then move west-southwestwards.

*Under the influence of a current Western Disturbance and an east-west trough in lower tropospheric levels, scattered to fairly wide spread rain/thunderstorm accompanied with lightning, hail & squall at isolated places likely to continue over Western Himalaya Region & adjoining plains during 3 days and reduce significant thereafter. 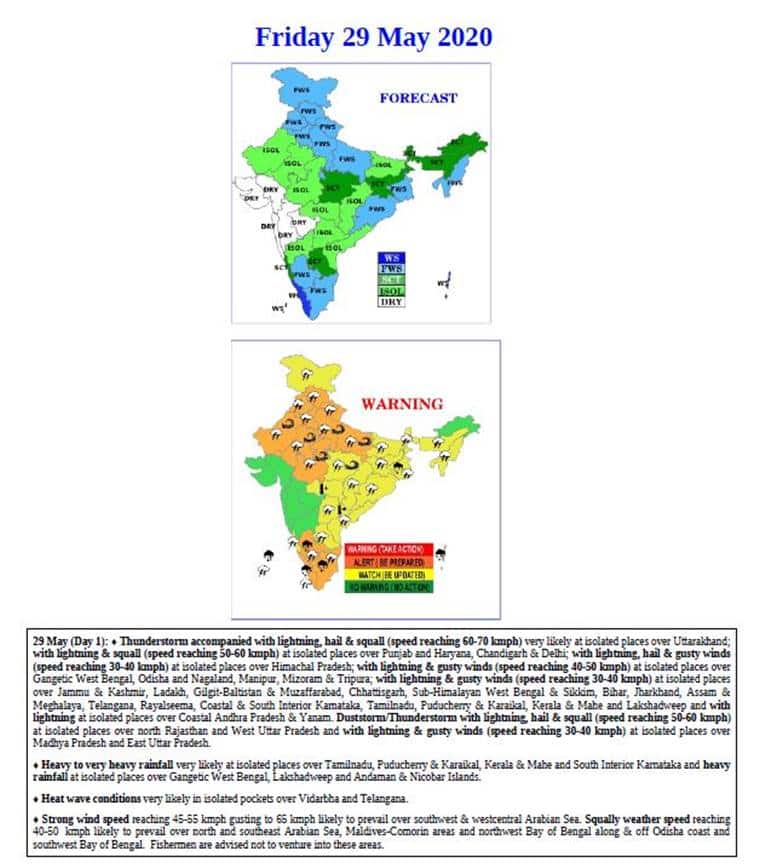 Orange alert for Kerala's Iddukki district ahead of monsoon 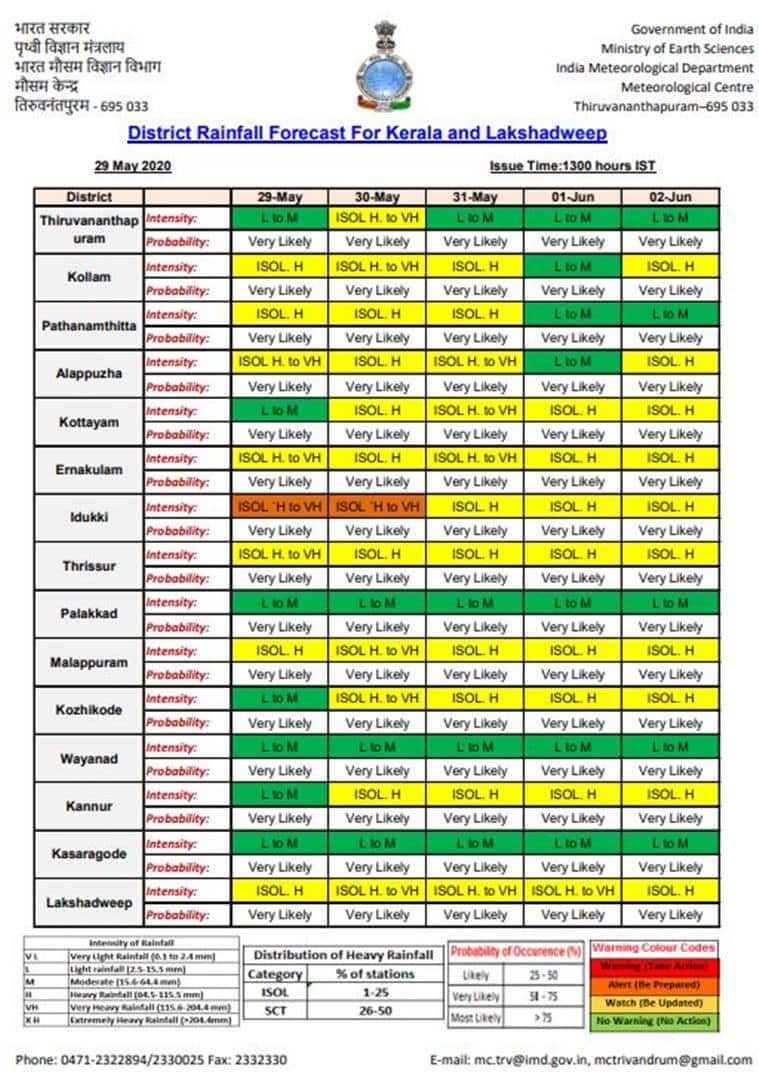 Monsoon to hit Kerala by June 1

The Indian Meteorological Department (IMD) on Thursday announced that conditions are favourable in Kerala for the onset of the southwest monsoon on June 1. "A low-pressure area is likely to form over the southeast and adjoining east-central Arabian Sea from 31st May to 4th June 2020. In view of this, conditions are very likely to become favourable from 1st June 2020 for the onset of southwest monsoon over Kerala," the IMD stated in its bulletin. 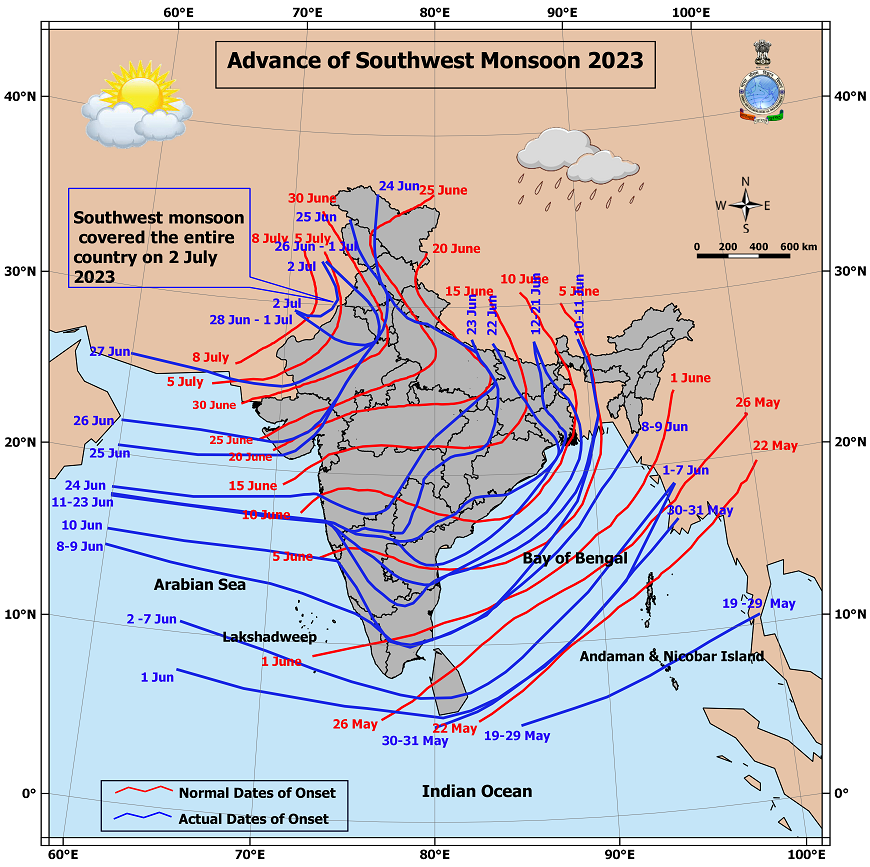 It rained in Chandigarh today; temperature dipped by over five degrees

Strong winds and rain on Thursday night brought respite to Chandigarh residents as the temperature dipped by over five degrees on Friday. As per India Meteorological Department (IMD), more rain is expected in the coming days.    (Express Photo by Kamleshwar Singh) The temperature in Delhi which was touching 48 degree celcius  came down to 28.8 degrees on Friday  it recieved light rain on Thursday.

Mumbai is likely to emerge unscathed by the Arabian sea cyclone. Thundershowers are predicted from May 31. ( PTI Photo)

A sudden change in weather brought the temperatures down in Delhi-NCR, as dust storms and rain engulfed the city on Sunday, 10 May.

Ahead of the advancement of the Southwest monsoon on June 1, the Arabian Sea adjoining the coast of Mumbai witnessed a cyclonic circulation that is likely to bring heavy rains and thunderstorm to the city.

According to the India Meteorological Department (IMD), the cyclonic circulation is “likely to concentrate into a depression during the next 48 hours, and may intensify further subsequently”.

It, however, poses no risk to Mumbai as of now, and is “very likely to move northwestwards towards South Oman and East Yemen coasts during the next three days”. No warning has been issued for Mumbai yet. However, thunderstorm and heavy rain are forecast for the coast of Maharashtra from on May 31 and June 1.

Earlier, announcing the advent of Southwest Monsoon, the IMD said “a low pressure area is likely to form over southeast and adjoining east central Arabian Sea during May 31 to June 4. In view of this, conditions are very likely to become favourable from June 1 for onset of southwest monsoon over Kerala,” adding that the “low pressure system, that lay west-central of the Arabian Sea is expected to concentrate into a depression.” According to the IMD, the country is likely to receive normal monsoon this year.

After remaining stagnant for over 10 days, the Southwest Monsoon Wednesday advanced into some more parts of south Bay of Bengal. The monsoon made an early arrival over the Andaman Sea and southeast Bay of Bengal this season due to favourable conditions that prevailed at the time of formation of Cyclone Amphan.