The national capital is expected to record a high of 45 degrees Celsius. (File)

There’s no respite for residents of Delhi as the India Meteorological Department (IMD) has predicted that heat wave conditions are likely to continue this weekend and in the coming week. The national capital is expected to record a high of 45 degrees Celsius and a low of 28 degrees Celsius on Saturday.

The weather forecast today live updates: Heat wave conditions are likely to continue over most parts of North India. Read the latest news and updates here.  Read in Malayalam

In Kanpur, the temperature has reached 42 degree Celsius.

People cover their heads as mercury rises in the state; #visuals from Kanpur where current temperature is 42 degrees Celsius. pic.twitter.com/jrzuWIQOVf

Heatwave in north Indian states to continue for next two days: IMD

Severe heatwave condition that persisted during last 3-4 days will continue for next two days in Punjab, Haryana, Chandigarh, Delhi, Rajasthan, southern Uttar Pradesh, northern Madhya Pradesh and some parts of Jharkhand, said IMD's M Mohapatra to ANI. The intensity will then decrease.

A day after the national capital sweltered under the hottest day of the season, mercury fell by a notch on Saturday morning. The city recorded a minimum temperature of 27.6 degrees Celsius, a day after parts it registered a high of 47 degrees Celsius. The maximum temperature later in the day is expected to hover around 45 degrees Celsius, according to the MeT Department. The relative humidity in the morning was 48 per cent. The weatherman has forecast heat wave spell later in the day and in the next few days.

The India Met Department (IMD) has retained the ‘normal’ monsoon outlook (96- to 104 per cent of the long-period average, LPA) for this year and reaffirmed the onset date as June 6 along the Kerala coast. This is the best news to emerge at a time when the country has been saddled with the second-worst rainfall record (a rainfall deficit of 25 per cent) during the just-concluded pre-monsoon season (March 1 to May 31). Read in Malayalam

Heatwave likely to continue till June 2

The heatwave intensified across India on Friday, with mercury soaring to the season's highest in states like Jammu and Kashmir, Delhi, Himachal Pradesh and Rajasthan, where the temperature neared 50 degrees Celsius in Sri Ganganagar. The heatwave will persist until June 2, when easterly winds from the Bay of Bengal will reach Delhi via Uttar Pradesh, bringing dust storm and thunder storm, IMD said.

Temperature breaks 75-year record for May in Rajasthan, nears 50 degree 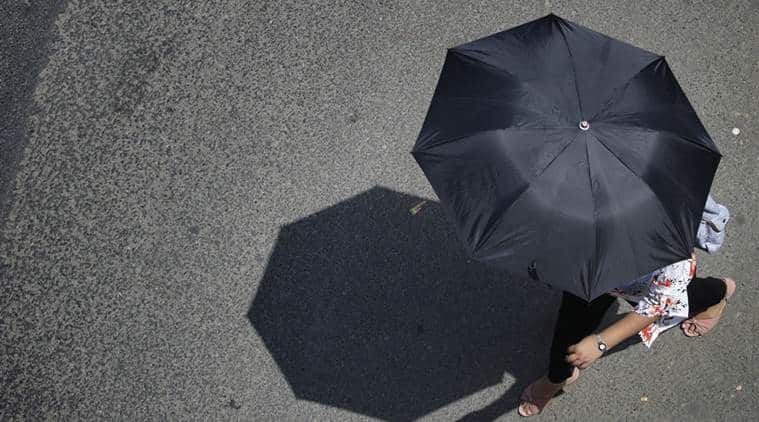 A lady uses an umbrella to protect herself from the heat in New Delhi. (Express Photo: Praveen Khanna)

Several parts of Telangana sizzled with the mercury crossing 43 degrees Celsius mark in two districts Thursday as the Met office warned the heatwave conditions were likely to continue till June 2. There was no respite from the ongoing heat that continued to sweep Haryana and Punjab on Thursday, with Narnaul sizzling at 46.9 degrees Celsius.