Weather Forecast Today HIGHLIGHTS: More than 1.65 lakh people were displaced from their homes in Kerala, where the death toll mounted to 57. In Karnataka, 26 people lost their lives in rain-related accidents.

Weather forecast today HIGHLIGHTS: The flood situation in Kerala and Karnataka continued to remain grim and 83 people lost their lives in both states. More than 1.65 lakh people were displaced from their homes in Kerala, where the death toll mounted to 57. In Karnataka, 26 people lost their lives in rain-related accidents. Chief Minister BS Yediyurappa will visit the flood-affected areas of Mangaluru tomorrow.

Meanwhile, the Tamil Nadu government deployed the Indian Air Force (IAF) into service to rescue people stranded in flood-hit Avalanchi in Nilgiris district. 16 people died in rain-related accidents in Gujarat, which received heavy rain since Friday. As many as 46 villages in Maharashtra’s Sangli and Kolhapur remain flooded and are disconnected due to extreme rainfall in the areas. Pune Divisional Commissioner Deepak Mhaisekar said the administration was airdropping food packets and drinking water using helicopters. The number of deaths due to the floods in Maharashtra rose to 29 on Friday. So far, at least 2.45 lakh residents of Sangli and Kolhapur have been shifted to relief camps. Meanwhile, 28 people have died due to heavy rains in Kerala, with 27 others injured and seven missing. Predicting more rains, the IMD sounded a red alert Saturday in nine districts in the state — Ernakulam, Idukki, Thrissur, Palakkad, Malappuram, Kozhikode, Wayanad, Kannur, Kasaragod. At least 64,000 people have been shifted to 738 relief camps in the state till Friday.

Follow live updates on weather news in Maharashtra, Kerala, Karnataka, Goa and other states across India.

The portion of National Highway 8 in Samkhiyali area of Kutch was waterlogged following heavy rain in the region.

Gujarat: Western Railway cancels 17 trains due to flooding of tracks

Following very heavy rains in Gujarat and Maharashtra which led to the flooding of tracks at some locations, the Western Railway on Saturday canceled 17 trains pertaining to Rajkot division, short-terminated 6 trains and diverted 2 trains on alternate routes.

With very heavy rainfall in Gujarat & Maharashtra flooding tracks at some locations and washing away embankment at others, 17 trains pertaining to Rajkot division of Western Railway have been cancelled, 6 short-terminated & 2 have been diverted on alternate routes @IndianExpress pic.twitter.com/r1W3K83TXq

People watch floodwaters overflowing Randarda Lake near the popular Pradyuman Park Zoo in Rajkot after the city experienced around 8 inch of rain on Saturday @IndianExpress pic.twitter.com/tmcvZfErGs

A daily-wage laborer's family, including their two children, aged 3 and 7 years old, were killed when a wall collapsed at a construction site in Ahmedabad on Saturday morning.

Indian Army has intensified its relief and rescue operations in Karnataka, Maharashtra, Tamil Nadu and Kerala. Nine Relief teams, 12 Engineer Teams are providing assistance to flood-affected people in Kolhapur and Sangli in Maharashtra.

Defense personnel on Saturday made arrangements to carry out relief work at Belagavi Air Force Station in Karnataka.

Karnataka: Former Union Minister B Janardhana Poojary rescued from his house in Bantwal

Dakshin Kannada District Administration on Saturday rescued Former Union Minister and Congress leader B Janardhana Poojary was rescued from his house in flood-hit Bantwal in Karnataka.

The Indian Air Force on Saturday rescued 11 people from Avalanchi in Nilgiris district, which has been experiencing incessant downpour since the past few days.

Gujarat: Eight killed in wall collapse due to heavy rain

Eight people were killed and four injured when a compound wall of a private compound collapsed due to heavy rain in Morbi town in Gujarat. The rubble fell on the victims' huts. The victims were migrant laborers from Madhya Pradesh.

Shri Saibaba Sansthan Trust (SST) of Shirdi announced a financial aid of Rs 10 crore as a relief for people affected by floods in various parts of the state. Heavy rains and release of water from dams triggered floods in Sangli, Kolhapur and parts of Satara districts in Western Maharashtra. Parts of Pune and Solapur districts are also affected by floods.

The Karnataka government pegged the damage caused by heavy rain and subsequent floods at Rs 6,000 crore. Chief Minister BS Yediyurappa said that this was "the biggest calamity" in 45 years, and added that his government has sought Rs 3,000 as relief from the Centre.

Incessant rains in most parts of Nashik district over the last few days have caused large-scale damage to crops across 11 talukas, officials said Saturday. Crops spread over 21,901.71 hectares of land across 758 villages in the district have been damaged due to heavy rains, which affected total 32,433 farmers, officials from the Collector office said. The tribal-dominated Igatpuri taluka was the worst hit as crops on 10,349 hectares of land spread over 126 villages were damaged. The taluka recorded 3,832 mm rainfall from June 1 to August 10, they said. Total 9,390 farmers were affected due to the crop loss in Igatpuri taluka. (PTI) 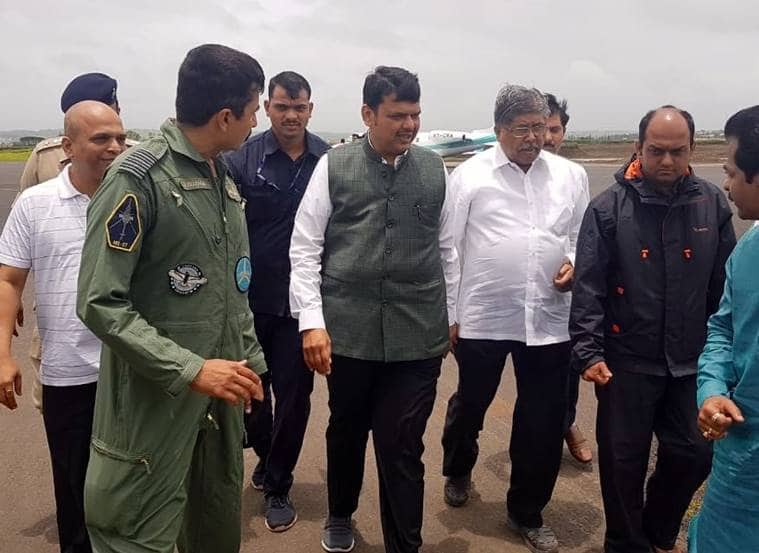 After a brief dry spell, Odisha is likely to receive a fresh bout of rainfall from Sunday, with another low pressure taking shape over the Bay of Bengal. A fresh low-pressure area, likely to form over northwest Bay of Bengal by around Monday, may trigger rainfall of varied intensity in different parts of Odisha, an official of the Meteorological Centre here said on Saturday. Districts such as Mayurbhanj, Keonjhar, Sundergarh, Sambalpur, Deogarh, Angul, Dhenkanal, Jajpur, Jagatsinghpur, Puri, Khurda, Nayagarh and Kendrapara are likely to receive heavy rainfall on Sunday, he said. (PTI)

Karnataka: People in Shivamogga district being evacuated as water enters into houses

People in Karnataka's Shivamogga district are being evacuated as the rainwater enters their houses in residential complexes.

NDRF teams conduct rescue operations in two talukas of Rajkot district in Gujarat - Padadhari and Lodhika. 482 people have been evacuated in Padadhari.

A fruit seller sits on a flooded road after monsoon rains in Nala Sopara in Palghar district of Maharashtra, Monday, Aug. 5, 2019. (PTI Photo)

While the rain continued intermittently in Maharashtra Friday, water levels in flooded areas had gone down and were expected to recede further in coming days with discharge from the dam being altered favourably, Pune Divisional Commissioner Deepak Mhaisekar said. Of the villages cut off from the rest of the district, 28 are in Sangli and 18 in Kolhapur.

Nine people were still missing after a boat capsized in Bramhanal village in Sangli. Of the 34 passengers, 16 were rescued and nine dead bodies were recovered.

“The discharge from Almatti river has been increased up to 4.5 lakh cusecs. This will help the water levels go down. The water level in Kolhapur has already gone down by 2 feet in Kolhapur and 3 inches in Sangli,” said Mhaisekar.

Meanwhile, Chief Minister Devendra Fadnavis briefed Prime Minister Narendra Modi about the floods and rescue and relief operations. “The Centre and state along with neighbouring state is closely working to bring water levels down. Rescue operations are going on a war footing,” Fadnavis said.