Weather forecast today HIGHLIGHTS: Follow our live blog through the day for the latest news and updates on the southwest monsoon and weather conditions across the country, including cities like Delhi, Mumbai, Bengaluru, Chennai, Bhopal, Ahmedabad etc.

Weather forecast today HIGHLIGHTS: Parts of Madhya Pradesh are likely to receive heavy to very heavy rainfall on Tuesday, the India Meteorological Department said. However, in a relief for flood-hit districts of Mandsaur and Neemuch, which are in western MP, the intensity of rains is likely to lessen. Due to heavy rainfall, at least 45,000 people were evacuated from flood-hit areas in various districts last weekend.

Follow our live blog through the day for the latest news and updates on the southwest monsoon and weather conditions across the country, including cities like Delhi, Mumbai, Bengaluru, Chennai, Bhopal, Ahmedabad etc.

Weather forecast today live updates: Follow the latest news and updates on the southwest monsoon, and the temperature today across India, including in Delhi, Mumbai, Bangalore, Chennai and other cities.

Hundreds of people were rescued by the Army across four districts of Rajasthan on Monday following a flood-like situation, while thousands others have been shifted to safer areas, even as Chief Minister Ashok Gehlot took stock of the situation and surveyed the flooded areas.

Fadnavis said his government is going to undertake a project to divert excess water from flood-affected areas to drought-prone regions.
A team of the World Bank recently visited Kolhapur, which witnessed unprecedented floods last month after heavy rains, to take stock of the situation and it will fund this ambitious project, he said while addressing a gathering. (PTI)

Parts of Uttar Pradesh will receive rain and thundershowers today due to a low pressure area, the IMD has said. It added that due to the likely increase in rainfall over Nepal, there could be a rise in water levels in the rivers of East Uttar Pradesh.

Parts of Maharashtra to witness heavy to very heavy rainfall today, the IMD has predicted. Mumbai, too, is likely to receive light showers. The city woke up to cloudy skies this morning with the minimum temperature at 16 degrees Celsius. In other news, Mumbai recorded the third highest September rainfall at 899.5 mm on Sunday — the all-time record for the month is 920 mm, recorded in 1954.

Delhi woke up to a cloudy morning today, with light showers reported in different parts of the city. Regions around the national capital also saw overcast skies and light rains. The minimum and maximum temperatures will be 27 and 36 degrees Celsius today.

Weather forecast today live updates: Your one stop shop for all rain-related news

Welcome to our blog on the weather. Through the day, we will update you on the weather across the country and give you rainfall-related news. We will also track the southwest monsoon, which is likely to begin its retreat this week. Stay tuned! 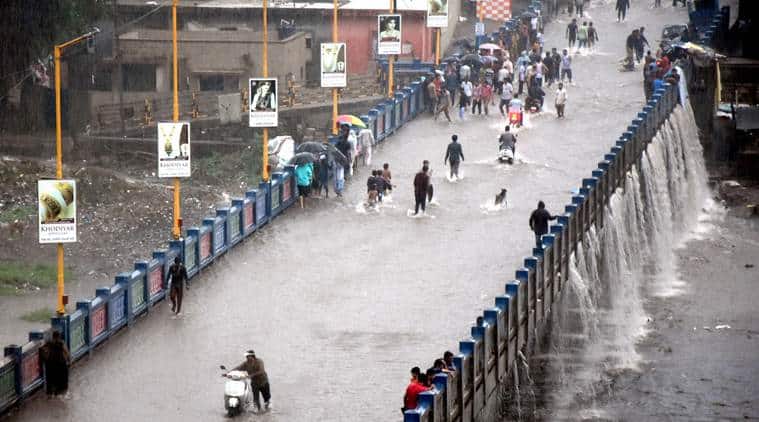 The India Meteorological Department (IMD) has said the southwest monsoon will be normal this year, with the withdrawal likely to occur between September 15 and September 20 — this week. "This month too, we are expecting to record above normal rainfall over the country. The monsoon this year will end up being normal," D Sivanand Pai, head, Climate Research and Services (CRS) at IMD, Pune, said.

In September, all regions except the northeast and northwest have recorded normal rainfall till September 11.

The overall rainfall this season was benefitted due to the weakening of El Nino in early July and the consistent shifting of the monsoon trough between south and central India regions. The rainfall distribution was fairly spatially even over most parts.

This season, there were many events of flooding in states like Bihar, Uttar Pradesh, Madhya Pradesh, Punjab, Himachal Pradesh, Uttarakhand, Rajasthan, Gujarat, Maharashtra, Karnataka and Kerala. The northeast region, however, will end up remaining rainfall deficit.