Nagva beach in Diu has been shut down since Wednesday morning as police personnel keep a watch in the wake of cyclone Maha. (Express photo: Javed Raja)

Weather forecast Today, Cyclone Maha Highlights: Cyclone Maha, which is expected to hit the Gujarat coast near Diu around noon on Thursday, has weakened into a severe cyclonic storm, the Indian Meteorological Department (IMD) said. The storm is currently hovering around 490 km west-southwest of Veraval (Gujarat) and 540 km west-southwest of Diu. It is also likely to bring “heavy to very heavy rains” during the next 48 hours at isolated places in the state along with gusty winds at the speed of up to 90 kmph. Follow LIVE updates here

Meanwhile, Andhra Pradesh and Odisha districts of Kendrapara and Jagatsinghpur are gearing up to tackle Cyclone Bulbul forming in the Bay of Bengal. This will be the seventh tropical cyclone this year to hit India.

In other news, the air quality in Delhi and NCR improved to ‘poor’ category on Wednesday with the overall Air Quality Index (AQI) showing 276 at 8.30 am, according to the System of Air Quality and Weather Forecasting And Research (SAFAR). However, the air quality at certain places remained ‘severe’ or ‘very poor’. At Chandni Chowk, for instance, PM10 was 449 which falls in the ‘severe’ category.

J&K: Amid first snowfall of the season, Mughal road was closed today for vehicular movement

Higher reaches of Kashmir including Gulmarg and Sonamarg tourist resorts received first snowfall of the season on Wednesday while the plains were lashed by rain, bringing down the mercury by more than 10 degrees. "Snowfall was witnessed in higher reaches of Kashmir valley including Gulmarg and Sonamarg in the wee hours today (Wednesday) while the city and other plains were lashed by rainfall," an official of the MET department said. (PTI)

The weathermen predictions of rain and thundershower in hills during the next two days, coinciding with a global investors meet here in the city, have sent its organisers in tizzy with authorities, including Himachal Chief Minister Jai Ram Thakur, turning to weather gods for smooth conduct opf the event. With the memory of September 15 T20 cricket match having been washed out due to rains being fresh in their minds, Himachal Pradesh Chief Minister Thakur visited the visited and prayed at the Indru Nag Temple of the local rain god for the smooth conduct of this global event. (PTI)

'Maha' may fizzle out, not hit Guj coast on Nov 7: IMD

Severe cyclonic storm 'Maha' may not hit the Gujarat coast and is likely to fizzle out into the Arabian sea as a 'depression' by Thursday evening, the Met department said on Wednesday. It would come as a big relief to the common people and administration if the latest prediction turns true. At present, 'Maha' is still a 'severe cyclonic storm' hovering over the east-central Arabian sea, and is located around 400 kms away from coastal Porbandar in Saurashtra region of Gujarat.  (PTI)

Delhi breathed easier on Wednesday as pollution levels dropped further due to clearer skies and moderate wind speed though weather experts feared a cloud cover at night and light drizzle could lead to deterioration of air quality. The government's air quality monitoring and forecasting service, SAFAR, said though Punjab recorded the season's highest farm fire count of 6,668 on Tuesday, its impact on Delhi's air quality will be negligible due to a change in the wind direction. (PTI)

Delhi: A layer of smog continues to cover the sky in the national capital. Visuals from the area around India Gate where the air quality remains in 'Unhealthy' category this morning. pic.twitter.com/emYn5UOc2g

Parts of Himachal likely to receive rains, snowfall from Thursday

The metrological department has forecast light to moderate rains and snowfall in some parts of Himachal Pradesh from Wednesday to Friday. An active western disturbance and cyclone Maha, currently lying over East Central Arabian Sea, is very likely to cause light to moderate rainfall over low and middle hills over the state, Shimla Met centre director Manmohan Singh said. (PTI)

The post-monsoon rain has not only caused an agrarian crisis in Maharashtra, but it has also made a serious dent in the business of trek organisers. “Rain has badly affected our treks. Usually, we plan our treks post monsoon, but this time rain has not stopped and we have not been able to plan anything. Our monthly income is down by 70 per cent due to the rain. There is not much excitement about rain trekking either this time around,” said Mahadeo Gadade from Midas Adventure, Mumbai.

Cyclone Maha is expected to move east-northeastwards with further weakening and will cross the Gujarat coast around Diu as a cyclonic storm with a wind speed of 70-80 kmph.

India Meteorological Department: #MAHACyclone weakened into a Severe Cyclonic Storm and lay centered, about 540 km west-southwest of Diu. To move east-northeastwards with further weakening; to cross Gujarat coast around Diu as a cyclonic storm with wind speed of 70-80 kmph. pic.twitter.com/5wsFhWvOfa

The air quality in Delhi and the National Capital Region (NCR) improved to ‘poor’ category on Wednesday with the overall Air Quality Index (AQI) showing 276 at 8:30 am, according to the System of Air Quality and Weather Forecasting And Research (SAFAR). Major pollutants PM 2.5 was recorded at 238 and PM 10 at 141 in Lodhi road area at 8:32 am. The air quality around India gate area also remained in ‘Unhealthy’ category this morning.

The weather department on Tuesday predicted widespread moderate to heavy snowfall and rains in the hills and plains of Jammu and Kashmir and Ladakh union territories for three days starting from Wednesday. The weather system is likely to cause temporary disruptions on surface transport especially over passes like Zojila, Srinagar-Jammu, Leh-Manali Highway, Mughal Road due to landslides, low temperature and heavy snowfall. (PTI)

In the wake of Cyclone Bulbul, heavy rain is predicted between November 9 and 12 over the east coast, especially in Andhra Pradesh and Odisha. The Odisha government on Monday warned people against visiting the sea shore. Over 600 cyclone shelters have been set up at villages, Sambeet Satapathy, the district emergency officer of Kendrapara, said. Authorities have also warned fishermen not to venture into the sea. It is likely that India will break its previous record of having been hit my most number of cyclones in a year, Skymet said. Last year, a 33-year-old record was broken after the country was hit by seven cyclones, it said.

Welcome to the Indian Express LIVE blog. Stay tuned to track the latest developments on the weather. 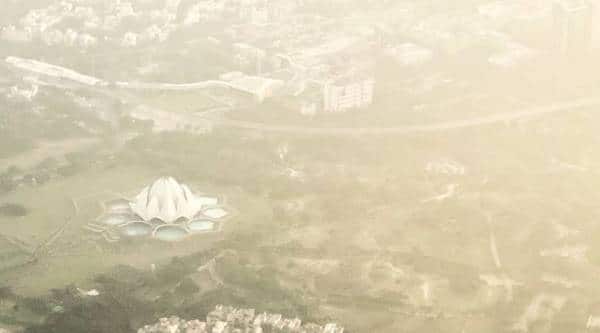 An aerial view of the Lotus Temple, Tuesday. (Express photo by Neeraj Priyadarshi)

Parts of the coastal Konkan, central Maharashtra and Marathwada regions are likely to receive rains along with Goa over the next two days due to ‘Maha’. Schools and colleges in coastal Palghar district of Maharashtra will remain closed from November 6 to 8 in view of warning of heavy rain due to cyclone `Maha’. Fishermen in Palghar and neighbouring Thane districts have also been asked not to venture into the sea, officials said.

Meanwhile, the weather department on Tuesday predicted widespread moderate to heavy snowfall and rains in the hills and plains of Jammu and Kashmir and Ladakh union territories for three days starting from Wednesday.