Weather today Highlights: Nearly 110 dead in 4 days due to heavy rains across country

Weather forecast Today Highlights: In Bihar, at least 18 people lost their lives due to the incessant rainfall since Friday.

In Uttar Pradesh, at least 35 people lost their lives due to the incessant rainfall since Friday. (Express file photo)

Weather forecast today Highlights: Nearly 110 lives were lost as heavy showers continued to batter states like Bihar, Punjab, Uttar Pradesh, Rajasthan, and Madhya Pradesh among others. At least 14 people were killed in rain-related incidents in Uttar Pradesh on Sunday, a government statement said.

In an official statement, the UP government said that six people died in separate incidents of wall collapse in Fatehpur, Mirzapur, Rae Bareli and Chandauli, while three people died in Ghazipur due to lightning strike and house collapse.

Meanwhile in Bihar, at least 18 people lost their lives due to the incessant rainfall since Friday.

The weather body has predicted heavy to very heavy rainfall at isolated places over Bihar, Sub-Himalayan West Bengal and Sikkim and Gujarat region.

Dams in Rajkot overflowing due to heavy rains

Dams in Rajkot overflowing due to incessant rains

Most of the 79 dams falling in Rajkot irrigation circle in Saurashtra were overflowing on Sunday due to very heavy rainfall for consecutive two days @IndianExpress pic.twitter.com/Cw7EXUhXx0

Battered by heavy rainfall for the third consecutive day, Bihar lost at least 18 lives on Sunday to mishaps caused by the downpour that inundated streets, water-logged railway tracks and marooned business establishments. The state capital continued to be among the worst affected, some of its parts submerged in water levels rising up to the chest and its residents being rescued with the help of municipal cranes normally used for moving the earth. (PTI)

14 die in rain-related incidents in UP

As many as 14 fresh rain-related deaths were reported from across the state, the Uttar Pradesh government said on Sunday. In an official statement, the state government said that six persons died in separate incidents of wall collapse in Fatehpur, Mirzapur, Rae Bareli and Chandauli while three persons perished in Ghazipur due to lightning strike and house collapse. One person each died in house collapse in Azamgarh, Jaunpur, Ballia and Ayodhya and snakebite claimed one life in Kaushambi. Eight persons were injured in the incidents in Fatehpur, Kaushambi, Ghazipur and Ayodhya. (PTI)

Nearly 110 people died in rain-related incidents across the country in the past four days, with Uttar Pradesh reporting the maximum deaths, while incessant rainfall in Bihar has badly hit normal life, with almost all areas of capital city Patna under knee-deep waters and people struggling to meet their daily needs. In what the weather department said could be the longest delayed withdrawal of monsoon, rains continued to lash several states including Bihar, where at least 13 people have died over the past 48 hours, while large swathes were inundated, affecting railway traffic, healthcare services, schools and disrupting power supply. In Uttar Pradesh, at least 79 people have died since Thursday. According to a state government report, 25 people died on Saturday, 18 lost their lives on Friday and 36 the day before. In Gujarat, three women drowned after their car was swept away at a flooded causeway in Rajkot district on Sunday following heavy rains in several parts of Saurashtra region, officials said. As many as 13 deaths were also reported on Saturday from Uttarakhand, Madhya Pradesh and Rajasthan in incidents triggered by heavy rains. (PTI)

Congress president Sonia Gandhi expressed grave concern on Sunday over the flood situation arising out of incessant rains in Bihar, especially in Patna, Uttar Pradesh and some other states and urged the Centre to provide assistance to the affected states. Hoping that the respective state governments and local administration were initiating sufficient relief and remedial measures, Gandhi instructed the office bearers of the pradesh Congress committees (PCCs) and its frontal organisations, as also every Congressman, to provide all possible assistance to the ordinary people facing hardship. (PTI)

Three women drowned after their car was swept away at a flooded causeway in Gujarat's Rajkot district on Sunday following heavy rains in several parts of Saurashtra region, officials said. Besides, four fishermen were feared drowned after their boat capsized off the coast near Gir Somnath district on Saturday evening, they said. In Rajkot, four relatives, including three women, were on way to Jamkandorna to attend a function when their car was swept away in a strong water current at an inundated causeway over the Fofal river, a police official said. While the three women drowned, the man was rescued by locals and admitted to a hospital where his condition was reported to be critical, he said. (PTI)

Train services on the Ballia-Chhapra section of the North Eastern Railway (NER) was disrupted due to heavy rain on Sunday. "Owing to heavy rain at around 4.15 am, we got information about the deposition of mud on the tracks on the Chhapra-Ballia section. This has disrupted rail traffic on the route," Public Relations Officer, NER, Mahesh Gupta said. Gupta said a number of trains on this section has been cancelled, while the long-distance trains are moving on the Chhapra-Bhatni-Mau route. (PTI)

In Pics | People wade through flooded streets in Bihar's Patna 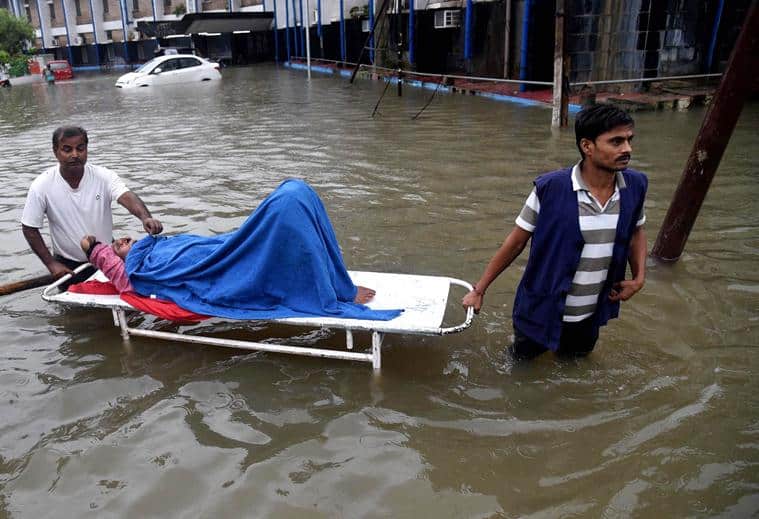 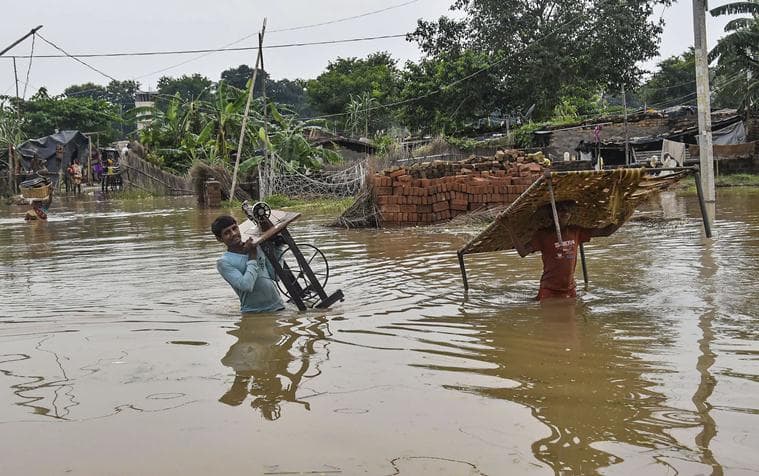 At least 13 people have been killed in rain-related incidents over the last 48 hours as three districts in Bihar experienced heavy rainfall. The heavy downpour has disrupted normal life, with businesses downing shutters and rail and road traffic movement affected. Read more

Ten injured in UP during clash over waterlogging

Nearly 10 people were injured after two families in a village here clashed over waterlogging due to rains, police said on Sunday. The incident took place on Saturday in Manipur village, Station House Officer, Girwan, Jitendra Singh said. He said the argument started after rainwater flowing down from Suresh's house accumulated at the door of Dayaram. Soon after, the two came to blows with their family members joining them. Suresh, five members of his family, and Dayaram and his three family members were injured in the clash, police said. They said the injured have been hospitalised. Cross-complaints have been lodged and police is investigating the case, the SHO said. Police said the locality faces waterlogging due to absence of drains which often lead to an argument among the residents. (PTI)

Proper arrangements and administration at the spot making all efforts: Bihar CM

Bihar Chief Minister Nitish Kumar said that proper arrangements and administration were at the flood-affected spots making all the necessary efforts to control the situation. " There has been heavy rainfall in some areas since yesterday and water in Ganga river is rising constantly. But there are proper arrangements and administration is at the spot and making all the efforts to help people. Such a situation is not in any one's hand. It's a natural thing. Arrangements are being done to provide drinking water to all. Also, arrangements are being made for community kitchens for the flood-affected people," he told reporters.

Bihar Chief Minister Nitish Kumar, in a video conference with district magistrates, told reporters, "We are making all possible efforts. I would appeal to the people of the state to have patience and courage. Torrential rain have followed a prolonged dry spell which vindicates our government's resolve to combat climate change through environmental preservation." (PTI)

Incessant showers, building collapses, and felling of trees have claimed at least 13 lives in Bihar. Patna is the worst-affected in the state, apart from Bhagalpur and Kaimur districts. The three districts are among over a dozen in the state that were lashed by incessant rain for close to 48 hours bringing normal business to a grinding halt and disrupting rail and road traffic in most places. The IMD has reported that till now, Patna has received more than 200 mm of rainfall since Friday evening, which was described by Principal Secretary, Disaster Management department, Pratyay Amrit as "totally unexpected". (PTI)

As many as 48 people died in rain-related incidents, the majority of them in Uttar Pradesh, while incessant rainfall in Bihar, where an alert has been sounded, left the streets of Patna and other areas waterlogged and residences of at least two ministers marooned. As many as 35 people lost their lives in Uttar Pradesh since Friday, the state government said. Read more

Watch: Narrow escape for students as truck veers off flooded road in Rajasthan

Nearly 20 schools children had a narrow escape after the truck they were travelling in veered off the flooded road in Dungarpur, Rajasthan.

#WATCH: Narrow escape for 12 school children after the truck they were travelling in veered off the flooded road in Dungarpur, Rajasthan. (28/09) pic.twitter.com/OtelfUn3Z6

People wade through a flooded street during heavy rain in Patna on Saturday. (PTI)

As many as 48 people died in rain-related incidents, majority of them in Uttar Pradesh, while incessant rainfall in Bihar, where an alert has been sounded, left the streets of state capital Patna and other areas waterlogged and residences of at least two ministers marooned.

The India Meteorological Department on Saturday forecast heavy to very heavy rain in parts of north Gujarat and the state's Saurashtra-Kutch belt over the weekend.

Meanwhile, River Krishna is in spate again following heavy rain in the upper catchment areas in Maharashtra and Karnataka. Consequently, the crest gates of major dams that were already full to the brim in Andhra Pradesh had to be opened for the third time in the last couple of months to let out floodwater into the Bay of Bengal.