Weather forecast Today, Cyclone Maha HIGHLIGHTS: Cyclone Maha fizzles out into the Arabian Sea as a 'depression' without making a landfall in Gujarat, said IMD, adding that showers are expected in the region in the next two days.

Weather forecast Today, Cyclone Maha HIGHLIGHTS: Cyclone ‘Maha’ spared Gujarat as it fizzled out into the Arabian sea, without making a landfall in the state, India Meteorological Department (IMD) said on Thursday. The cyclone, which was expected to skirt Saurashtra coast, saw rapid weakening earlier. The weather system would bring light to moderate rain in most parts of Gujarat during the next two days, it added. Meanwhile, another cyclone – ‘Bulbul’ over the Bay of Bengal is set to intensify into a severe cyclonic storm soon and trigger heavy rain in Odisha. The state government on Thursday issued a revised advisory asking the districts to brace up for possible flood-like situation and waterlogging.

In another development, with the onset of winter, parts of North India including, Gulmarg in Kashmir and Solang valley and Siramur district in Himachal Pradesh received first snowfall of the season on Wednesday and Thursday, respectively. Officials said traffic on the Jammu-Srinagar national highway was going on smoothly despite rains.

The J&K Police on Thursday said that Jammu-Srinagar National Highway was blocked at Samroli, Udhampur due to a landslide. The union territory received its first snowfall on Wednesday and Thursday. ANI

Cyclonic storm ‘Maha’, which was supposed to make landfall in Gujarat, originated from a low pressure area off the southern tip of India on October 30. Later, it slowly intensified, reaching ‘severe’ cyclonic storm status on November 2, ‘very severe’ on November 3 and ‘extremely severe’ on November 4. The storm was expected to make a landfall in Gujarat between November 6 and 7, but spared the state, in a big relief to the people in the region. According to the India Meteorological Department (IMD), Maha fizzled out into the Arabian sea as a ‘depression’.

The name ‘Maha’ was provided by Oman and the cyclonic storm was earlier preceded by cyclones Vayu and Kyarr. Maha was following a similar track as Cyclone Kyarr, which recently became the second-most intense tropical cyclone recorded in the North Indian Ocean. Strong upper-level winds generated by Maha caused Kyarr to weaken. Cyclone Maha over the Arabian Sea started weakening rapidly on Wednesday and turned into a ‘deep depression’, and then a ‘depression’ by Thursday morning, the weatherman said. Read More

Air pollution in Delhi did not drop by 25 % as claimed by AAP govt: Greenpeace

The Delhi government's claim of a 25 per cent reduction in air pollution levels over the past few years is not true, environment NGO Greenpeace India said on Thursday. "Historical ambient air quality monitoring and satellite data coupled with increasing fossil fuel consumption in Delhi and adjoining states contradict the government's claims of a 25 per cent reduction in pollution levels over past years," according to an analysis by the NGO.

In government advertisements, Chief Minister Arvind Kejriwal has been claiming that levels of PM 2.5 (or particulate matters equal to smaller then 2.5 microns in diameter) reduced to an average of 115 between 2016 and 2018 from an average of 154 between 2012 and 2014, which amounted to a 25 per cent reduction. However, Greenpeace India said that satellite data shows no statistically significant reduction in PM2.5 levels over the period from 2013 to 2018 and only shows slight reductions in later part of 2018 compared to the past three years. PTI

PMO takes stock of preparations to deal with cyclone 'Bulbul'

Principal Secretary to the Prime Minister, Dr PK Mishra held a high-level meeting with the Chief Secretaries of Odisha, West Bengal and Union Territories of Andaman and Nicobar Islands on Thursday, to review their preparedness to deal with cyclone Bulbul, reports ANI. According to the government statement, the meeting reviewed the situation arising due to the movement of cyclone 'Bulbul' in the last few hours.

11 flights to Srinagar from Delhi cancelled due to bad weather: DIAL

Delhi International Airport Limited ( DIAL) on Thursday said that 11 flights to Srinagar from Delhi were cancelled on Thursday, due to bad in weather in Srinagar. The Valley received its fresh snowfall of the season on Wednesday. IMD has said that rains and snowfall will continue in Jammu and Kashmir Union Territory for three days starting Wednesday. (PTI)

After a brief relief, the national capital's air quality plunged to the "very poor" category again on Thursday due to high humidity because of light rains, officials said. Weather experts said high humidity and light winds affect dispersion of pollutants and lead to the formation of more potent secondary particles. Secondary particles are products of complicated atmospheric reactions between primary particles, such as particulate matter, sulphur dioxide and nitrogen dioxide directly emitted by stubble burning and vehicles, in the presence of other factors such as sunlight and moisture.

In a major relief to people of Gujarat, cyclone 'Maha' fizzled out into the Arabian sea as a 'depression' without making a landfall in the state, the India Meteorological Department (IMD) said on Thursday. The cyclone over the Arabian sea started weakening rapidly on Wednesday and turned into a 'deep depression', and then a 'depression' by Thursday morning, it said.

The 'depression' is about 100 km south of Veraval coast of Gujarat, the IMD said in a release. " It is very likely to move east-northeastwards and weaken into a well-marked low-pressure area off the south Gujarat coast during next 12 hours," it said. The weather system would bring light to moderate rain in most parts of Gujarat during the next two days, it said. PTI

Light drizzles in Delhi will not improve air quality in Delhi: IMD

He further said that remnants of Cyclone Maha are left, adding that western disturbances are main reason behind change in weather in Delhi/NCR.

"Light showers in Delhi, Haryana, Punjab, J&K are attributed to the Cyclone Maha remnants. The cyclone has weakened already, only remnants are left," he said.

Due to heavy heavy snowfall across Kashmir, Jammu-Srinagar National Highway was closed for traffic while all flights to and fro Srinagar airport were cancelled, officials said.

Roads connecting Srinagar with far-flung areas like Gurez, Macchil, Keran and Tangdhar have also been closed due to adverse weather conditions.

Over 2,000 vehicles are stranded on the highway.

"A call on afternoon flights will be taken only after reassessing the weather situation," the official said.

Cyclone 'Bulbul' may intensify, likely to move towards Bengal

Cyclone Bulbul is likely to intensify into a severe cyclonic storm over the next 24 hours and set to move towards West Bengal and Bangladesh coasts, skirting Odisha, PTI quoted a senior IMD official as saying.

As a precautionary measure, the Odisha government has asked all district administrations to closely watch the development of the cyclonic system, as it may trigger heavy rainfall in several areas. 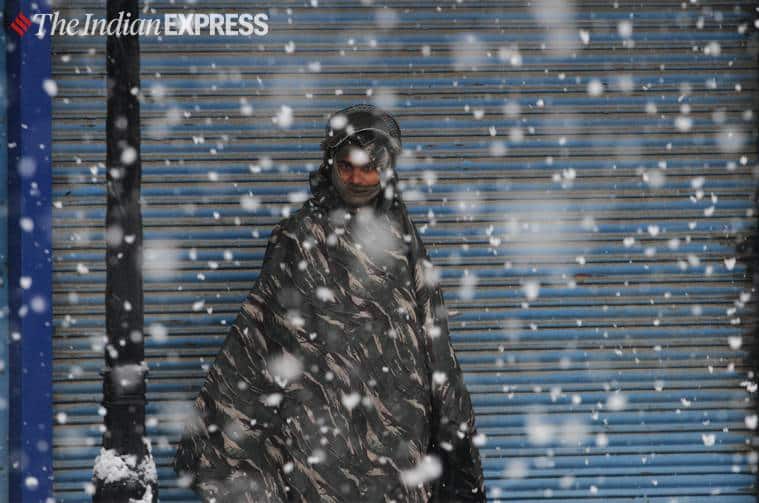 All beaches in Gujarat's Diu were closed for all activity and hotels were asked not to take in any more tourists as IMD predicted the weakening of Cyclone Maha that was to hit stat'es coast at Diu today afternoon.

“We have five teams of NDRF as well as teams of local administration and police in Diu to deal with the cyclone threat. As the IMD has predicted that the cyclone has weakened, we are now focusing on dilapidated or kutcha structures near the sea as wind speed of 80-90km/hr can cause damage. A total of eight shelter homes have been set up across Diu… Fishermen have been advised not to go to the sea…,” said Sonali Rai, collector, Diu.

Snowing in Srinagar. It’s this season’s first one. ❄️ pic.twitter.com/5tkr6MGYiJ 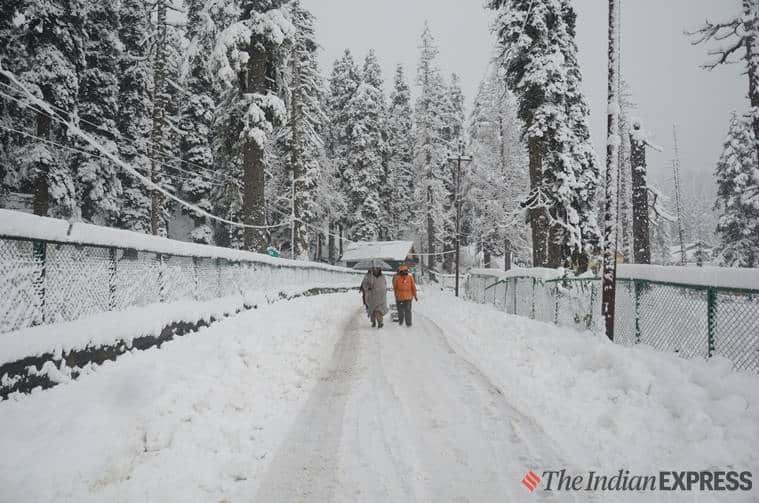 Dozens of boats parked at Vanakbara ports in Diu town on Wednesday morning as Diu administration prohibited all boats to go out in the sea as Cyclone Maha is all set to hit the Diu coast of Gujarat by Thursday. (Express photo: Javed Raja)

Cyclone Maha is also likely to bring “heavy to very heavy rains” during the next 48 hours at isolated places in the state along with gusty winds at the speed of up to 90 kmph. Meanwhile, Andhra Pradesh and Odisha districts of Kendrapara and Jagatsinghpur are gearing up to tackle Cyclone Bulbul forming in the Bay of Bengal. This will be the seventh tropical cyclone this year to hit India.

The air quality in Delhi and NCR improved to ‘poor’ category on Wednesday with the overall Air Quality Index (AQI) showing 276 at 8.30 am, according to the System of Air Quality and Weather Forecasting And Research (SAFAR). However, the air quality at certain places remained ‘severe’ or ‘very poor’. At Chandni Chowk, for instance, PM10 was 449 which falls in the ‘severe’ category.