Mumbai rains Highlights: There were water logging complaints in Mazgaon, Sakinaka, Kurla (W) and Ghatkopar among other areas.

Weather forecast today Highlights: Three people died due to electrocution in separate areas of Mumbai. A 60-year-old woman died in Andheri (East) area, while two people died in Goregaon (East) because of the electrocution.

Several BEST bus services were diverted from their original routes because of extreme waterlogging. SV Road and National College in between Old Khar to Bandra Talkies route were heavily waterlogged, so the BEST changed its routes to PD Hinduja Road and Link Road.

There were waterlogging complaints in Mazgaon, Sakinaka, Kurla (W) and Ghatkopar among other areas. The Andheri subway has been shut for now while waterlogging was also reported at the Milan subway in Santa Cruz.

The first spell of rains lashed Mumbai on Friday morning, with heavy traffic and waterlogging taking over the city.

Follow us as we get you the latest weather reports from Mumbai where it is raining heavily today as well as the weather forecast from across the country.

Three persons were killed and five injured in rain-related incidents on Friday in Mumbai, which was lashed by the first spell of heavy rains this monsoon, officials said. Three persons died of electric shocks, while two others were injured in two separate incidents in the western suburbs, a spokesperson of the Brihanmumbai Municipal Corporation (BMC) said. Private weather forecaster Skymet predicted heavy to very heavy rains in Mumbai, Thane, Ratnagiri and the adjoining areas in the next 24 hours. (PTI) People wade through a waterlogged street in Thane

People on foot and vehicles waded through heavily waterlogged streets in Thane after first splash of rains in the city. Four-storeyed school building sealed in Thane due to rains

A four-storeyed school building in Thane was sealed after chunks of plaster started peeling due to the heavy rainfall, a civic official said. The school building, located in Mumbra township's Kismat Colony, was evacuated by the local fire brigade, Thane Regional Disaster Management Cell chief Santosh Kadam said. "The building is around 25 years old. It was in the C-B category of dangerous buildings. It will need repairs," he added.

Level-0 wall collapse in Dadar (East) injured three people. The incident, primarily due to heavy rains, was reported at around 2:57 pm. The injured who have been identified as Chandrakant Dinkar Todavale, Vijay Nagar, and 28-year-old Chetan Dilip Tathe, were admitted to KEM Hospital. Doctors at the KEM Hospital said Chetan's condition was stable, while the other two were being treated.

Workers clean garbage off the railway tracks to prevent water logging as it rains in Thane.

Three people die due to electrocution

Three people died due to electrocution in Mumbai. A 60-year-old woman died in Andheri (East) area, while two were electrocuted in Goregaon (East).

Since many areas are waterlogged, several BEST buses have been diverted from their original routes in the city. 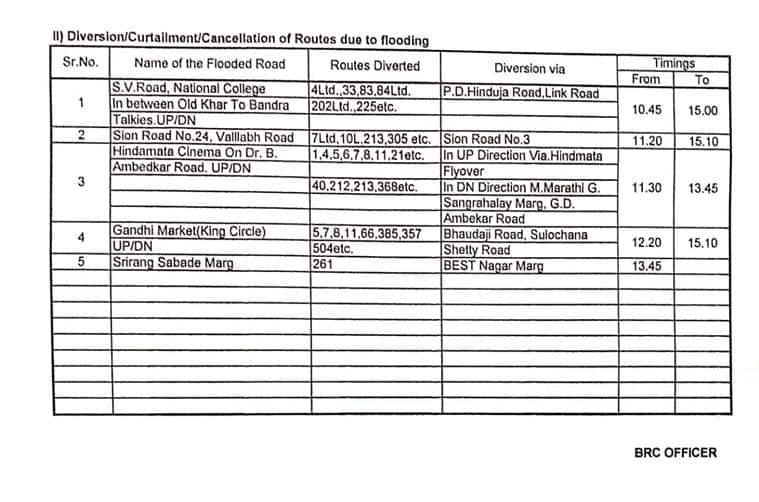 BMC pumps out waterlogging at Andheri Subway within half an hour

BMC pumps out waterlogging at Andheri Subway, Marol, and Sakinaka within half an hour

Water logging at Andheri Subway, Marol & Sakinaka was pumped out within half an hour! We hope the early redressal brought relief to the commuters #MumbaiRains #AtMumbaisService #MCGMUpdate

A view of Mogra Nalla from the Disaster Management Control Room. We request all citizens to not drive into water logged areas till the water is pumped out. We understand you may get slightly delayed but let’s not compromise on safety #MumbaiRains pic.twitter.com/Xp8asXWovX

Heavy traffic, waterlogging due to rains

The first spell of heavy rains lashed Mumbai city, resulting in waterlogging and traffic jams in several areas. Heavy traffic jam affected the movement of vehicles on the Mulund-Sion stretch of the Eastern Express Highway, a BMC official said, adding that they had to close a busy subway in suburban Andheri due to water-logging. Complaints of waterlogging came from areas like Santa Cruz, Andheri (East), Andheri (West), Ghatkopar, Kurla, and Mazgaon among many others.

Water logging can be seen on railway tracks at Kanjurmarg railway station.

Water logging can be seen on railway tracks at Kanjurmarg railway station.

Visuals of waterlogged streets can be seen in some parts of Mumbai.

Visuals of waterlogged streets can be seen in some parts of Mumbai. Fishermen are advised to not venture into sea: IMD

Fishermen have been advised to not venture into the seas due to rough conditions prevailing over southwest & westcentral
Arabian Sea with wind speed reaching 40-50 Kmph, according to India Meteorological Department's latest release.

Watch: Water logging in Mumbai due to heavy rains

2 or 3 cms of rain in Mumbai and the city starts unravelling. ⁦@IndianExpress⁩ video by Ganesh Shirsekar pic.twitter.com/HNMQfARo5S

Southwest and westcentral the Arabian Sea, eastcentral and adjoining the southwest Bay of Bengal and the Andaman Sea are likely to experience rough to very rough sea conditions, fishermen have been advised to not venture into the seas, according to India Meteorological Department's latest release.

Currently, the Northern Limit of Monsoon continues to pass through Veraval, Surat, Indore, Mandla, Pendra, Sultanpur, Lakhimpur Kheri, Mukteshwar. Thunderstorm with gusty winds is likely to occur over parts of Uttarakhand and Uttar Pradesh. Thunderstorm with accompanied with lightning is likely at several places in West Bengal, Sikkim, Bihar, Odisha and Jharkhand.

Despite the progression of the monsoon, rainfall has recorded a 36 per cent deficiency over the country as a whole. In other words, the actual rainfall of 86.3 mm is 36 per cent lower than the normal of 135.6 mm for this time of the year.