Mumbai Rains Highlights: The southwest monsoon got active again after a brief lull last week, coming back at a time when people across Maharashtra are celebrating the 10-day Ganesh festival.

The IMD said that 100 out of the 150 weather stations in the city recorded over 200 mm rain in the last 24 hours. (Express photo by Prashant Nadkar)

Mumbai Rains HIGHLIGHTS: A day after heavy rain battered Mumbai, the city is in for some respite Thursday as water levels have receded in multiple parts of the city. The India Meteorological Department has issued an orange alert with a forecast of “heavy to very heavy” rainfall in Mumbai and its neighbouring areas — Palghar, Thane, Raigad, Ratnagiri and Nashik. Local train services resumed this morning, a day after several were delayed or cancelled. At least 24 flights were grounded last night; three resumed at 1 am.

According to BMC’s disaster management department, the situation was worsened by the 4.13-m high tide around 3.30 pm, which stalled the draining out of rainwater through the stormwater outfalls. Kurla West was once again the worst-affected area as the Mithi river reached the 3.92-m mark and overflowed around noon.

The southwest monsoon got active again after a brief lull last week, coming back at a time when people across Maharashtra are celebrating the 10-day Ganesh festival. In the last four days, the city has received 399.4 mm of rain, which is more that the average rainfall of September, said BMC officials. In the last 11 years, the average September rainfall has been 341 mm. On Wednesday only, the city received 350 mm.

Mumbai rains: IMD has issued a warning of "heavy to very heavy rainfall" today in Mumbai and areas nearby. Follow Highlights

Heavy rains lashing the city since the weekend continued to hit flight operations from the city Thursday, leading to 32 cancellations, mostly of Indigo, and over 350 flight delays. Of the cancelled flights, 18 were departures and the rest 14 were arrivals, as per the live flight tracking website Flightradar24. The GVK group-run airport operator did not provide any update except the one in the morning when in brief statement, it claimed that "operations are normal". (PTI)

Due to incessant rain in the city, the queue of devotees for darshan at Lalbaugcha Raja which usually takes about 14 to 18 hours was completed in 3 hours today. (Express photo by Pradip Das) 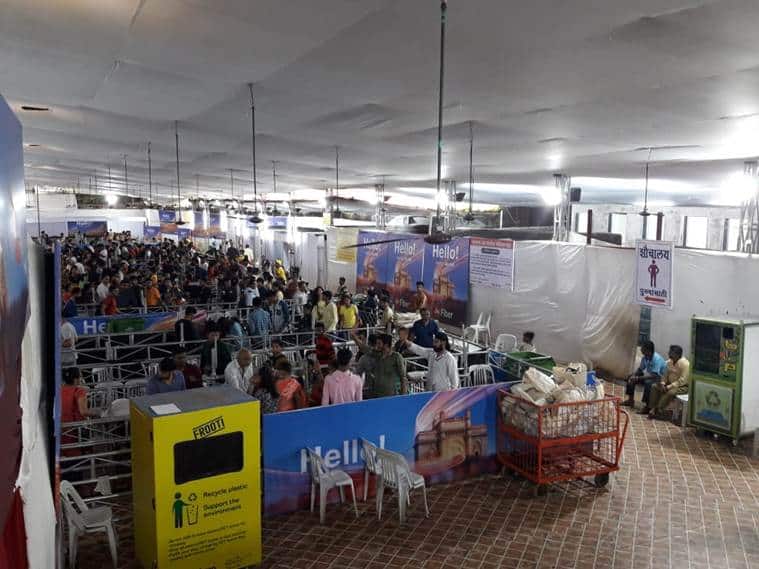 The Santacruz weather station in suburban Mumbai recorded a whopping 242 mm rainfall in the 24 hours ending at 8.30 am Thursday. At least 1,300 persons living on the banks of the Mithi were shifted by the National Disaster Response Force, disaster management cell of the BMC, fire brigade and the police when the river crossed the danger mark. (PTI)

Two washed away in flooded nullahs in Thane, Palghar

Two persons including a seven-year-old boy were washed away in flooded nullahs in Thane and neighbouring Palghar district in the last two days, the police said. Laxman Tapisar (62), resident of Naikpada in Bhiwandi tehsil of Thane, was washed away on Tuesday. Abu Khan (7) was washed away after falling into a nullah near his house in Nallasopara in Palghar district around noon on Wednesday.  (PTI)

At least 5 people dead in the past 2 days in rain-related incidents: BMC Disaster Management cell

On September 4, around 6pm Vijayendra Bagadi (36) and Jagdish Parmar (54) lost their lives while they were on duty in Goregaon. According to the BMC, while Parmar died of heart attack, cause of death of Bagadi is yet to be known. Bagadi was sent to Jogeshwari Trauma centre and Parmar was admitted to Kapadiya Hospital. In another incident, at Bharat Nagar creek, Income Tax office junction at BKC, a 24-years old Mohammad Shakeeb Shaikh (24) fell in creek around 4pm on Wednesday. His body was removed and sent to Sion Hospital.  A body of 60-year old Ashok Mayekar was found floating in flooded Hindmata street on Wednesday late night.

Aviation regulator DGCA will probe the alleged incident of budget carrier IndiGo forcing the passengers of its Jaipur-bound flight to sit in the stranded aircraft at Mumbai Airport on Wednesday night, a top official source said. IndiGo's operations at the city airport were hit hard with the carrier cancelling many flights on Wednesday following incessant rains in the city. Of around 20 flights that were cancelled, most were of IndiGo. (PTI)

The operations at the country's second busiest airport had witnessed heavy disruptions on Wednesday as rains crippled the city.

A lull in the rains offered much-needed respite to Mumbai on Thursday with train and road traffic returning to normal.

Services on the Central line restarted around 12.15 am between Kurla to Kalyan and around 12.35 am between Chhatrapati Shivaji Maharaj Terminus (CSMT) to Goregaon, officials said. Special trains were run post-midnight to ferry the commuters who were stranded at various railway stations. Railway Minister Piyush Goyal tweeted about restoration of services in the morning. Western Railway services on the fast track between Churchgate and Vasai Road also resumed. (PTI)

In wake of the heavy rainfall in Mumbai, Vistara Airlines has issued a waiver on date change and fee on ticket cancellation today. It also said that it will accommodate customers on any available flight today or tomorrow with no additional fare.

For most residents of Vasai Virar and Nallasopara, Wednesday brought back memories of last year, when extreme rainfall, coupled with high tide, had led to flooding and marooning of Thane, Navi Mumbai and Vasai Virar.

The Maharashtra State Electricity Distribution Company Limited had to shut down electricity of over 1.7 lakh customers across the region after their feeders in Vasai were inundated. The municipal hospital in Vashi developed several leakages and buckets had to be placed around the wards and lobbies to collect rainwater.

According to environmental activists, the flooding of these villages is a byproduct of destruction of wetland in the area.

A day after rains paralyzed Mumbai, normal bus services resumed today. All diversions which were affected due to waterlogging at several places have been restored.

The municipality and disaster management systems’ response was quick, unlike previous flood days of July 2-3 and August 3-4. The BMC expeditiously made arrangements to accommodate stranded people in 145 municipal schools. “Also, several schools near major stations such as CSMT, Marine Lines, Mumbai Central, Byculla, Dadar, Andheri, Govandi and Ghatkopar have been kept open to provide space for stranded residents,” said a municipal official.

In the last four days, Mumbai has received 399.4 mm of rain, which is more that the average rainfall of September, said BMC officials. In the last 11 years, the average September rainfall has been 341 mm. On Wednesday only, the city received 350 mm!

Orange alert in Mumbai today: What does this mean?

An ‘Orange’ warning stands for “Alert." The warning means that the authorities — in this case the Mumbai Police, Brihanmumbai Municipal Corporation (BMC), Mumbai Fire Brigade, National Disaster Response Force (NDRF), Railways, etc. — to “be prepared”. The forecast during an Orange warning is of heavy to very heavy rainfall.

The Maharashtra government declared a holiday on Thursday in all schools and junior colleges in Mumbai, Thane and the Kokan region as a precautionary measure in view of heavy rainfall forecast, school education minister Ashish Shelar announced. It was left for district collectors in other parts of Maharashtra to decide, based on local conditions, whether to declare a holiday or not. The BMC had asked the schools in the city and suburbs to remain closed on Wednesday in view of heavy rainfall.

A list of trains that are short terminated, cancelled or rescheduled due to the heavy rains

Waterfall or Mumbai rains? Here’s why water was gushing down a building in Cuffe Parade As Mumbaikars grapple with heavy rainfall, a video of water pouring down from the roof a building at New Cuffe Parade has gone viral on social media, leaving many worried. While many blamed the torrential rains for the situation, others said it resembled a waterfall. But it later turned out that it was a rupture in the new water tank installed in the building. Read more

Even as flight operations continued at the Chhatrapati Shivaji Maharaj International Airport, 24 Indigo flights were grounded after the airline’s staff failed to reach the airport on time owing to heavy rain and traffic disruption. Indigo, in a statement, said: “Close to 24 flights held up on the ground until 23:30 hours. With all ongoing collective efforts, five of our flights have departed between 22:30 and 23:10 hours. As of now, all passengers who have arrived have disembarked from the aircraft and baggage delivery is still in progress.” It later said that operations are slowly, but gradually getting back to normal

Maharashtra: Passengers sleeping outside the Mumbai Domestic Airport due to flight delays, caused by rainfall in the city. #MumbaiRains pic.twitter.com/X1GgWB6MOA

Mumbaikars have some respite from the incessant rainfall this morning. In comparison to Wednesday, the rains have decreased and the local train service has been largely restored. "CR Suburban harbour line services restored. Local train towards Andheri left Chhatrapati Shivaji Maharaj Terminus (CSMT) at 5:22 AM, & local train towards Panvel left CSMT at 6 AM," Central Railway said.

Nine hours of extremely heavy rainfall flooded the Mithi river, disrupting the road and suburban rail services in Mumbai on Wednesday. An overflowing Mithi river led several housing colonies in Kurla, the main roads and some internal roads to be completely submerged for hours. Coinciding with the rise in Mithi’s level, tracks at Kurla, Sion and Chunabhatti stations were also submerged.

According to the BMC, around 1,300 people from Kranti Nagar and Bamandaya Pada from Kurla West were evacuated with the help of Navy and NDRF personnel, and moved to a shelter homes

Mumbai residents have been asked to call 1916 for any assistance. People have been asked to avoid venturing near the sea or walking in waterlogged areas. Overnight rains have also resulted in waterlogging and traffic disruption in Sion, Parel, King’s Circle, Dadar and Byculla. In the wake of IMD’s warning of heavy rainfall for Wednesday, all Mumbai schools shall remain closed today.