Weather forecast Today Highlights: Weather conditions continue to remain unfavourable for the further advancement of monsoon in Rajasthan, Delhi, Punjab and Haryana, the India Meteorological Department said on Friday. However, a slow progress of monsoon is likely in Gujarat, Madhya Pradesh and Uttar Pradesh in the next 2 days.

Today, Kerala, Karnataka, Mahe and Uttarakhand are set to witness isolated heavy showers. The Met department has warned people to stay indoors as moderate to severe thunderstorms accompanied by ground lightening over Uttarakhand, UP, MP, Chhattisgarh, Bihar and Jharkhand may cause injuries.

Monsoon flow pattern is likely to organise and strengthen gradually between June 26 and June 30 and the further advancement to most parts of northwest India is likely during the same period. Usually, monsoon reaches Delhi by June 27 and covers the entire country by July 8.

Several low-lying areas and thoroughfares in the city lay inundated on Thursday as heavy rain continued to lash parts of Bengal, with the Met department predicting more downpour over the next three days under the influence of a vigorous southwest monsoon and a
cyclonic circulation.

According to the Met department, Kolkata recorded 144 mm rainfall in 24 hours till 8.30 am.

The southern parts of the city received more rainfall than the north, leaving streets and alleys waterlogged in Ballygunge Circular Road, Loudon Street, Southern Avenue and places in Kasba, Behala and Tollygunge.

With the state government easing COVID-19 curbs and offices partially opening up in the metropolis and elsewhere, people had a difficult time wading through knee-deep water to reach their destinations.

The India Meteorological Department has predicted heavy to very heavy isolated showers in Kerala, Karnataka, Mahe and Uttarakhand in the next 24 hours.

18-06-2021; 0800 IST; Thunderstorm with light to moderate intensity rain would occur over and adjoining areas of Nazibabad, Moradabad, Amroha, Chandausi, Chandpur, Rampur(U.P.) during next 2 hours. pic.twitter.com/QYtyaHc2BH

Weather conditions continue to remain unfavourable for the further advancement of monsoon in Rajasthan, Delhi, Punjab and Haryana, the India Meteorological Department said on Friday.

"The impact of mid-latitude westerly on monsoon is likely to continue till June 23, and hence the advance of monsoon into Rajasthan, remaining parts Punjab, Haryana and Delhi is not likely during the same period," the IMD forecast stated.

Maharashtra's Raigad experienced heavy to moderate showers in different parts in the last 24 hours and the coastal district has already received 17.23 per cent of its yearly rainfall quota, the local administration said on Thursday.

In the 24 hours ended 8.30 am, Raigad district has recorded 66.03 mm rainfall, said a release from the collector's office here. Alibag received the highest rainfall among talukas at 104 mm, while the lowest was in Khalapur at 14 mm, the release said. The coastal district has been receiving bountiful showers since the arrival of the south-west monsoon.

A short spell of rain lashed several parts of the national capital on Thursday providing respite from the hot weather to the residents. The city recorded a maximum temperature of 35 degrees Celsius, four notches below normal, while the minimum temperature settled at 26.2 degrees Celsius, two notches below season's average, according to the Indian Meteorological Department (IMD). The relative humidity recorded at 5.30 pm was 51 per cent. The weather man has forecast generally cloudy sky with light rain or drizzle in Delhi on Friday. --PTI

Thunderstorm with light to moderate intensity rain would occur over and adjoining areas of Roorkee, Saharanpur (Uttarakhand), Badaun, Chandausi(U.P.), Laxmangarh, Rajgarh (Rajasthan) during next 2 hours.

Weather forecast for next five days

Mahabaleshwar, on Wednesday, witnessed its wettest day in June so far, recording 212 mm till Thursday.

Rainfall at the hill-station had picked up from June 16, and showers have been consistent there ever since. Due to favourable orography, Mahabaleshwar is one of the heavy-rain-recording areas of Maharashtra. During monsoon, Mahabaleshwar receives an average of 5,530mm of rain.

The presence of an off-shore trough between Karnataka and Kerala along with another trough running between central Arabian Sea and south Konkan has kept monsoon currents active over Konkan and south-central Maharashtra regions. Read More

While the minimum temperature in Delhi was recorded at 26.2 degrees Celsius, two notches below the normal, the maximum temprature is expected to settle around 37 degrees Celsius.

Delhi's air quality was in the 'satisfactory' category on Tuesday morning. Data from Central Pollution Control Board showed that the hourly air quality index (AQI) at 8.05 am stood at 100.

The maximum and minimum temperature on Wednesday were 26.2 degrees and 34.2 degrees Celsius, respectively. (PTI)

The national capital is likely to have a generally cloudy sky with light rain on Thursday, the India Meteorological Department (IMD) said.

While the minimum temperature in Delhi was recorded at 26.2 degrees Celsius, two notches below the normal, the maximum is expected to settle around 37 degrees Celsius.

Delhi's air quality was in the 'satisfactory' category Thursday morning, with Central Pollution Control Board data showing the hourly air quality index (AQI) at 100 at 8.05 am.

The maximum and minimum temperatures on Wednesday were 26.2 degrees and 34.2 degrees Celsius, respectively. (PTI)

The 24-hour rainfall recorded on Thursday at Pashan was 5.1 mm whereas Shivajinagar and Lohegaon reported 3.9 mm and 1mm rainfall, respectively.

The India Meteorological Department (IMD) has forecast light rainfall over the city (2.4 mm to 15.6 mm in 24 hours) on the day, but ghat areas are likely to witness heavy showers. Read More

Western disturbances have been observed by IMD with its axis at 5.8 km above mean sea level.

Ten days after the Southwest Monsoon arrived in Pune, city areas are yet to record an appreciable amount of rainfall. Since June 1, Pune city has recorded 54.7mm of rain.

Many parts of Pune district, however, have received significant rainfall in the last fortnight, ranging between 41mm and 254mm.

In comparison to Pune city’s 18 per cent below normal rainfall till June 15, Pune district has received 117.4mm, which is 65 per cent surplus and considered under the ‘excess’ category by the India Meteorological Department (IMD). Read more here. 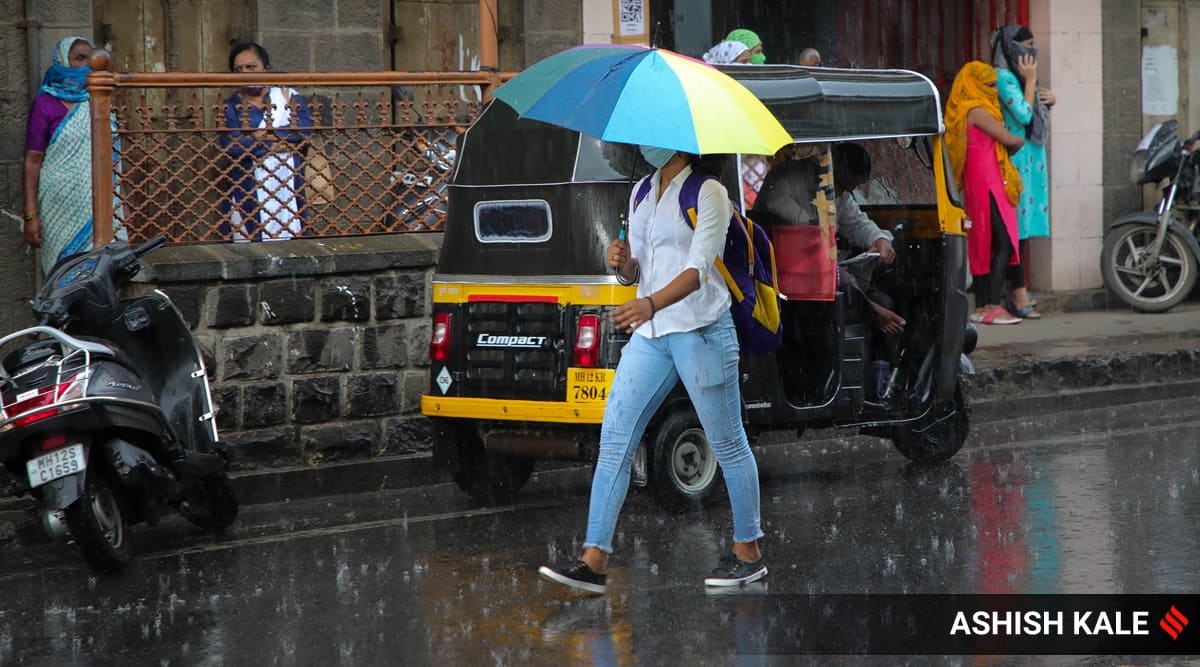 Even 10 days after the southwest monsoon set over Pune, the city areas are yet to record appreciable rainfall. Since June 1, Pune city has recorded 54.7mm.

Many parts of Pune district, however, have fared better, with the rainfall in the last fortnight here ranging between 41mm and 254mm.

In comparison to Pune city’s 18 per cent below normal rainfall (till June 15), Pune district has received 117.4mm, which is 65 per cent surplus and considered under the ‘excess’ category by the India Meteorological Department (IMD).

Meanwhile, widespread rain, thunderstorm and lightning have been forecast for south Konkan and Goa, Karnataka and Kerala and Mahe during the next 3 days due to an offshore trough running from North Maharashtra coast to North Kerala coast.

However, the IMD said that the onset of monsoon in Delhi will be delayed by another week. A westerly trough has impeded the rapid progress of the monsoon in northwest India and it will take seven to 10 more days for the wind system to reach Delhi, it said.

“Due to the adverse influence of mid-latitude westerlies, a hiatus in further advance of Southwest monsoon into remaining parts of northwest India. The situation is being monitored continuously and will be updated on a daily basis. The delay may be for 7-10 days. The situation will be more clear tomorrow,” news agency PTI reported quoting Kuldeep Srivastava, the head of the IMD’s regional forecasting centre.