High tides were seen at Tithal beach in Valsad district after the cyclone diverted towards Maharashtra on Tuesday afternoon.

CThe India Meteorological Department (IMD) Tuesday said that Cyclone “Nisarga” is very likely to intensify into a “severe cyclonic storm” over the next 12 hours and cross Maharashtra and South Gujarat coast on Wednesday. The cyclonic storm will cross North Maharashtra and adjoining South Gujarat coast between Harihareshwar and Daman, close to Alibaug (in Maharashtras Raigad), on June 3 as a severe cyclonic storm with a maximum sustained wind 100-110 gusting to 120 kmph, an IMD official said. Mumbai, Thane, Palghar have been put on red alert till June 4.

Cyclone Nisarga comes weeks after Super Cyclone Amphan hit West Bengal, Odisha and Bangladesh. Residents along the coasts of Maharashtra and Gujarat have been alerted of the storm.

“As per the trajectory of the system, it’s expected to make the landfall somewhere near south of Mumbai. But it is a dynamic system and is subject to change in the next 24 to 48 hours. Mumbai is in the trajectory and will feel the adverse impact of the (developing) cyclone,” Sunitha Devi, a scientist at Regional Specialised Meteorological Centre, Delhi, said.

In other news, the southwest monsoon made a timely onset over Kerala on Monday, marking the commencement of the four-month long rainfall season. North India is likely to get “above normal” rainfall, while central India and the southern peninsula will receive “normal” rainfall, the weather department said.

Dattatray Davne, 55, was out on the sea since Saturday, hoping to make up for the season lost during the lockdown. But the group he was part of was soon disappointed with the warning of cyclone Nisarga in the Arabian Sea and was forced to return to the shore. The fishing season ends on June 15 but now they have to wait for further advisories before venturing out into the sea. Read more here

As cyclone approaches, 3 NDRF teams on alert in Mumbai, 2 each in Palghar & Thane

With ‘Cyclone Nisarga’ expected to make landfall just 105 km north of the city Wednesday, Mumbai Police has issued a prohibitory order restricting any movement of more than a person along the coastline. Read more here

In view of the approaching cyclone, Nisarga, which is very likely to intensify into a “severe cyclonic storm” and cross Maharashtra and South Gujarat coast on Wednesday afternoon with a wind velocity of 100-110 kmph, the Gujarat government has evacuated close to 35,000 people from the coastal districts of Bharuch, Surat, Navsari and Valsad. Read more here

The Indian Navy and National Disaster Response Force (NDRF) have done preemptive deployment and laid groundwork for the imminent cyclonic storm Nisarga in coastal districts of Maharashtra and Gujarat, and also for possible situations due to onset of monsoon along the western coast. Read mroe here

In view of the approaching cyclone, Nisarga, which is very likely to intensify into a “severe cyclonic storm” and cross Maharashtra and South Gujarat coast on Wednesday afternoon with a wind velocity of 100-110 kmph, the Gujarat government has evacuated close to 35,000 people from the coastal districts of Bharuch, Surat, Navsari and Valsad.

Gujarat Relief Commissioner Harshad Patel said that the cyclone is 670 km from Surat with its velocity intensifying.

“Of the total population of 5,79,906 of 167 villages and Bet areas of 21 talukas in eight districts, including Surat, Navsari, Bharuch, Valsad, Bhavnagar, Anand, Amreli and Gir Somnath, 34,885 people need to be evacuated. Of these, 16,597 have been shifted to 265 shelter homes by Tuesday late evening while the remaining would be completed by late Tuesday night, relief commissioner Harshad Patel said. Read more

Cyclone Nisarga over the eastcentral Arabian Sea has further moved in the north-northeast direction, the IMD said. Rainfall is continuing in Colaba, Santacruz and Goa. Wind speed has increased to 24 kmph from 20 kmph at Ratnagiri in Maharashtra. "Met updates at 10.30 pm, 2 Jun. Mumbai and around rainfall since evening. Now its picked up intensity," India Meteorological Department's (IMD) Mumbai deputy director general of meteorology K S Hosalikar tweeted. The IMD has predicted moderate rainfall in most parts of the metropolis and heavy to very heavy rainfall in isolated places over the next 24 hours.

In the wake of Cyclone Nisarga, GVK MIAL-managed Chhatrapati Shivaji Maharaj International Airport (CSMIA) will be operating only 12 arrival flights on June 3. The flights will be operated by 4 airlines, which include Air Asia India, Air India, GoAir and SpiceJet, to 10 sectors.

The formation of Cyclone Nisarga on Tuesday is only the second time since 1902 that a cyclone has developed over the Arabian Sea in June in two consecutive years.

As of 5.30 pm Tuesday, Cyclone Nisarga was located 380 km south-southwest of Mumbai. It is expected to make landfall near Alibag on Wednesday afternoon.

According to cyclone frequency records maintained by the India Meteorological Department (IMD), cyclones were reported in June 1902 and 1903, the only other instance when two consecutive Junes reported cyclones in the Arabian Sea.

IMD classifies a cyclone when the maximum wind speed is 35 knots (70–80 kmph gusting to 90 kmph) or more.

According to the IMD’s cyclone data records of the last 129 years, there have been 26 cyclonic storms that formed here in June. Read more

Maharashtra Chief Minister Uddha Thackeray on Tuesday asked people to stay alert in view of th impending cyclonic storm `Nisarga'. He had spoken to Prime Minister Narendra Modi abouT the storm and Modi assured all necessary help from the UnioN government, he said.

In a televised address, Thackeray asked people to staY alert as the storm is expected to hit the state's coastal bel on Wednesday afternoon, and shared a list of `do's and dont's in the situation.

"The cyclone could be more severe than the ones th state has faced till now....Tomorrow and the day after ar crucial in coastal areas," he said "Activities which had resumed (as part of easing o lockdown to contain coronavirus) will be kept shut there fo the next two days in view of the cyclone...people shoul remain alert, Thackeray said. 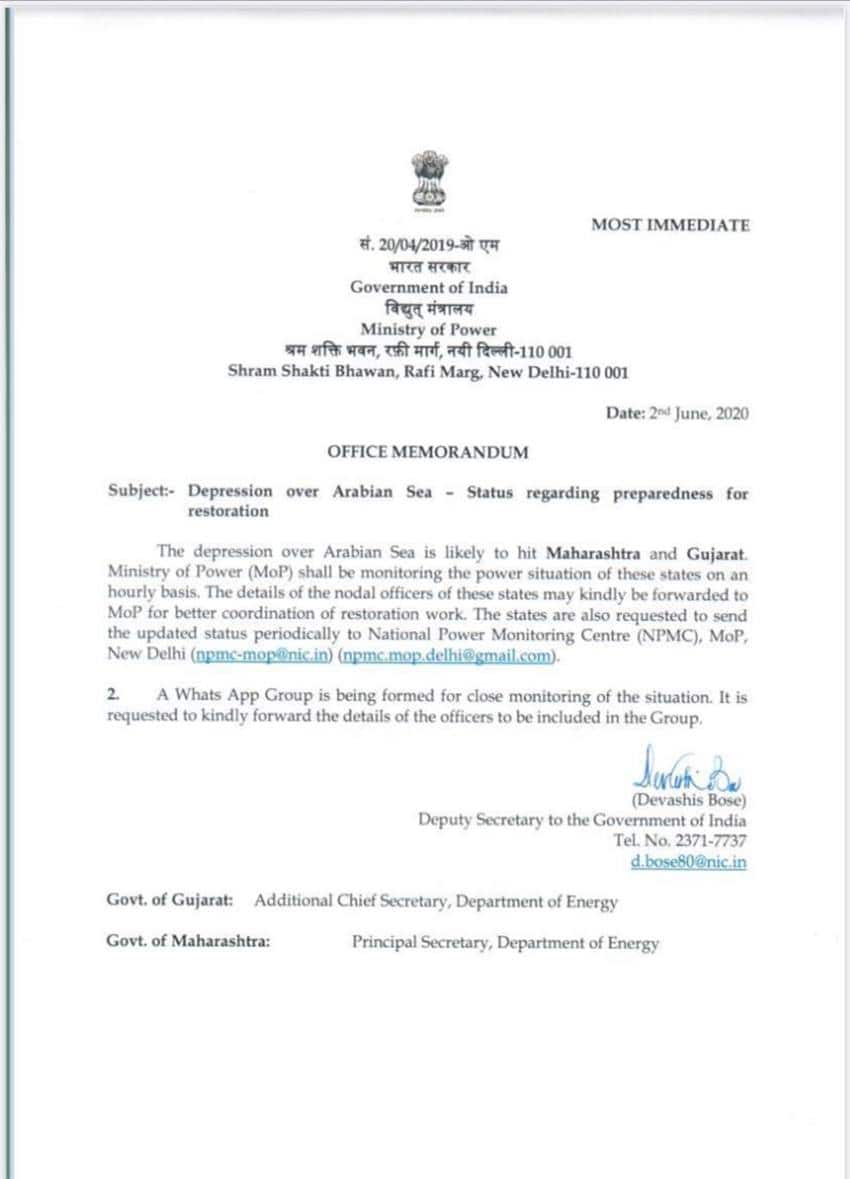 The Cyclonic Storm ‘NISARGA’ over Eastcentral Arabian Sea moved north-northeastward with a speed of 13 kmph during past 06 hours, and lay centred at 1730 hours IST of today, the 0 n June, 2020 over Eastcentral Arabian Sea near latitude 16.3°N and longitude 71.3°E, about 280 k west-northwest of Panjim (Goa), 350 km south-southwest of Mumbai (Maharashtra), 300 km southsouthwest of Alibagh (Maharashtra) and 560 km south-southwest of Surat (Gujarat).

With the IMD predicting that cyclone 'Nisarga' will turn into a "severe cyclonic storm" by Wednesday afternoon and bringing gusty winds with heavy rains in south Gujarat, the government has started evacuating over 78,000 people from four districts located near the coastline and deployed 19 teams of NDRF and SDRF, officials have said. While 13 teams of the National Disaster Response Force (NDRF) and six teams of the State Disaster Response Force (SDRF) have been deployed at different locations, five more teams of the NDRF will arrive soon.

A huge tree was uprooted opposite Balgandharva rangamandir on JM road in Pune on Tuesday. 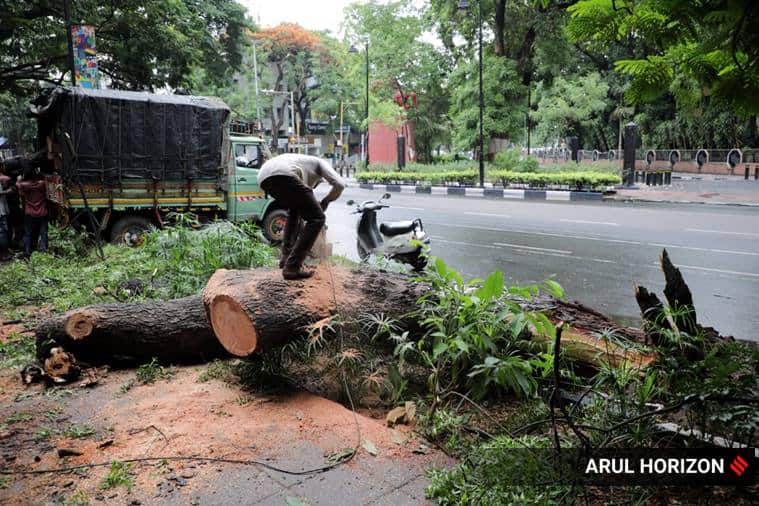 "Out of the 16 NDRF units, 10 have been deployed for rescue operation during the cyclone, and 6 SDRF units are in reserve," the Chief Minister's Office (CMO) said in a graphic shared on Twitter. 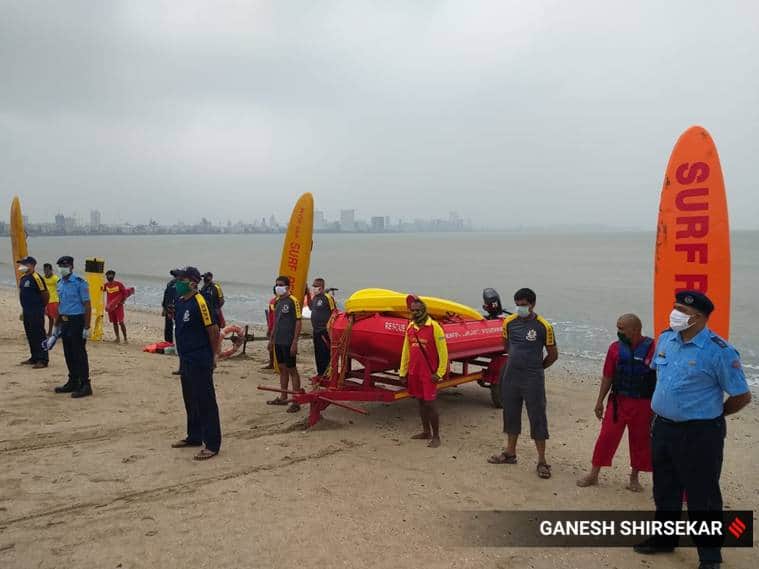 Here's how Maharashtra government is preparing to face the cyclone

The impending cyclonic storm, which might turn into a 'severe cyclonic storm', could pose challenges for Maharashtra which is already battling a steep surge in coronavirus cases, during relief and rescue operations involving many people. Here's how the state government is taking precautions. 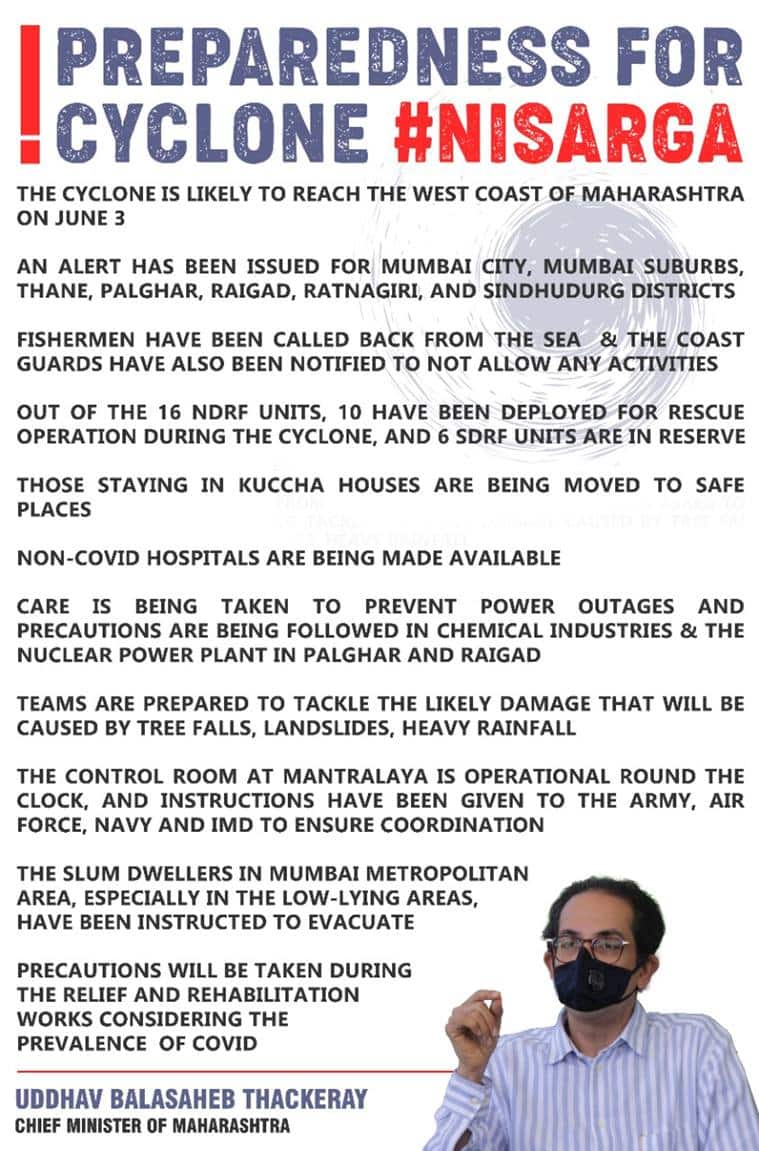 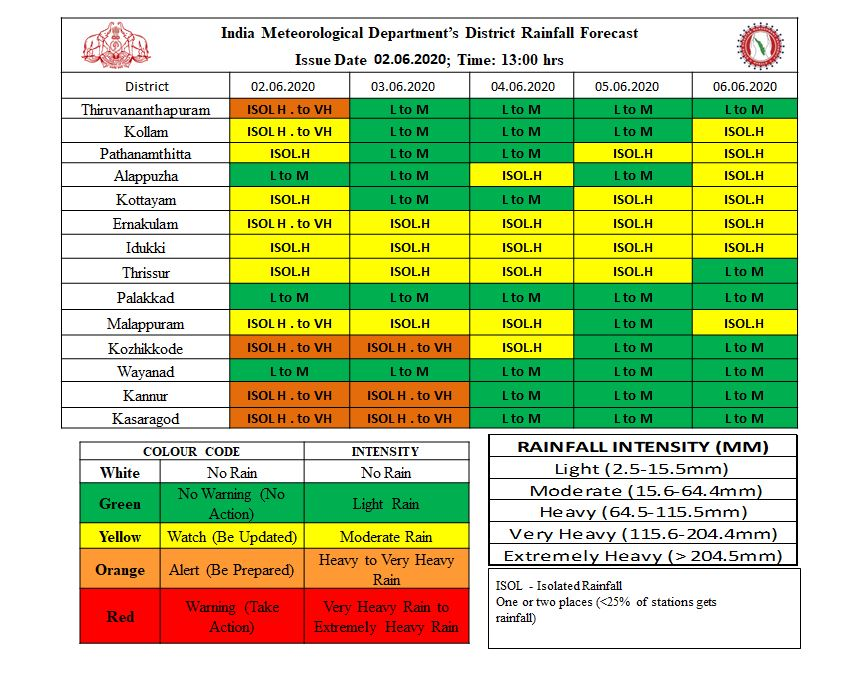 The Deep Depression over Eastcentral Arabian Sea moved northwards with a speed of 11 kmph during past 06 hours, intensified into Cyclonic Storm ‘NISARGA’ and lay centred at 1130 hours IST of today, the 02nd June, 2020 over Eastcentral Arabian Sea near latitude 15.6°N and longitude 71.2°E, about 280 km west-northwest of Panjim (Goa), 430 km south-southwest of Mumbai (Maharashtra) and 640 km south-southwest of Surat (Gujarat). 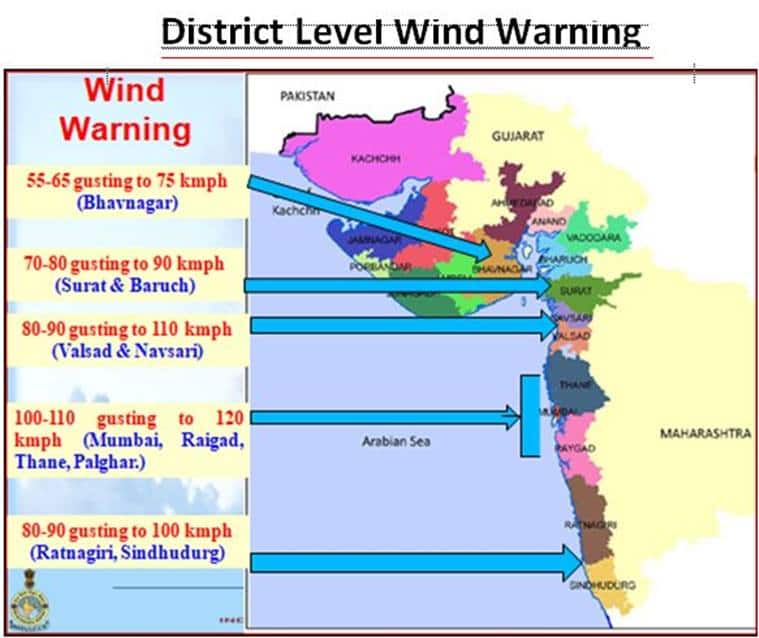 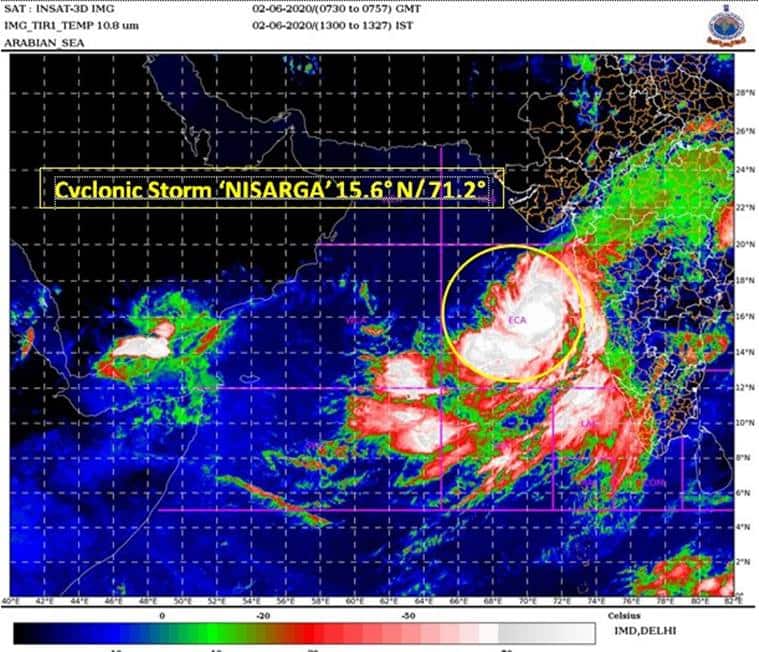 A series of landslides followed by incessant rainfall, has killed 20 people, including children, in three districts of southern Assam’s Barak Valley: Cachar, Karimganj and Hailakandi. The incidents — which took place in the early hours of Tuesday morning — comes in the heels of damaging floods, which have affected the state in the past week.  Read more 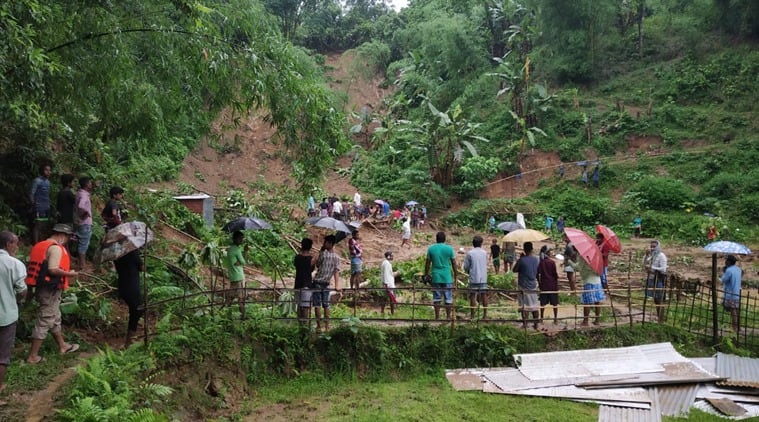 High tides were seen at Tithal beach in Valsad district after the cyclone diverted towards Maharashtra on Tuesday afternoon. 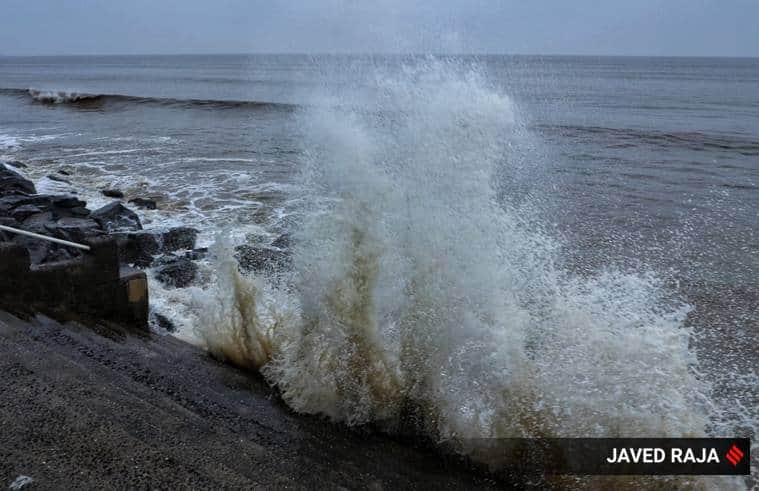 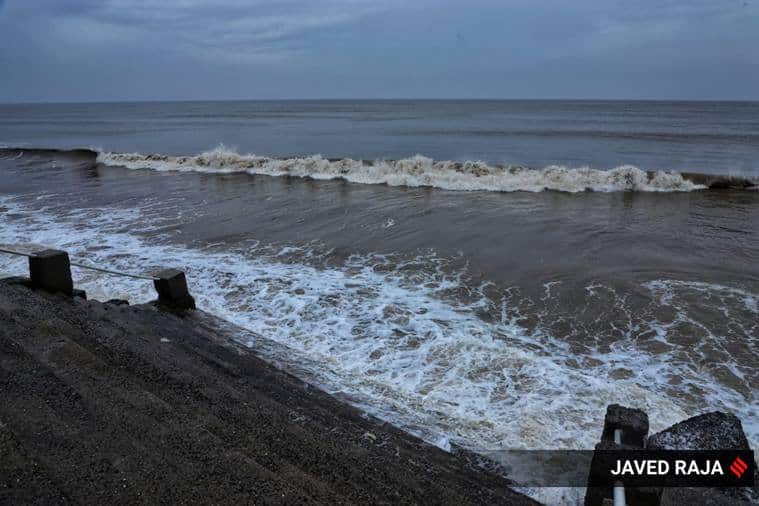 Cyclone Nisarga: 33 NDRF teams deployed in the coastal districts of Maharashtra and Gujarat

33 NDRF teams have been deployed in the coastal districts of Maharashtra and Gujarat in view of the impending Cyclone Nisarga, the chief of the federal contingency force said on Tuesday.

In a video message, NDRF Director General (DG) S N Pradhan said, "Gujarat and Maharashtra have 11 and 10 teams respectively and they are being deployed in the coastal districts facing the Arabian Sea". On Gujarat's request, five more teams are being airlifted to the state from Punjab, he said. Gujarat will have a total of 17 NDRF teams, including two on standby, and neighbouring Maharashtra 16 teams, including six on standby, he said. "This will constitute a total of 33 teams in the two states," the officer said.

The southwest monsoon arrived in Kerala on Monday, Ministry of Earth Sciences (MoES) Secretary Dr Madhavan Nair Rajeevan announced. He said the country would experience a "good and normal" monsoon this year.

The India Meteorological Department (IMD), which released the second long-range forecast for monsoon 2020, said the monsoon had been delayed by four days due to Cyclone Amphan, that hit the coasts of West Bengal and Gujarat last month.

“There is good news, and that is that we will have a good monsoon. The Long Period Average (LPA) this year is 102 per cent across the entire country, for the period of June to September," Rajeevan said. “This is two per cent more than what we expected,” he added.

“In July, which is a crucial month for farmers, we expect an LPA of 103 per cent across the country, which dips slightly to 97 per cent in August, which is a little less than normal. According to our data we have a high probability of a normal monsoon at 41 per cent, while the chances of a deficient monsoon are low at 5 per cent. Our data shows that this will be a good monsoon year for us,” Rajeevan said.

He added that the IMD expects a “good spatial distribution” of the rainfall across the country.

Also read | Explained: How big is the cyclonic threat on west coast?

IMD director-general Mrutyunjay Mohapatra said, “Many atmospheric variables over the region indicate ENSO Neutral to cool ENSO neutral conditions over the region. The latest forecasts from MMCFS and other global models, as well as our own, together indicate cool ENSO neutral conditions are likely to prevail… However, a few other climate models indicate possibility of development of weak La Niña conditions in the later part of the season or thereafter. These also create favourable conditions for a good monsoon.”