Video of a woman brandishing a gun to scare off a bunch of men who were attacking her husband in front of their house in Lucknow has emerged on social media. The woman is being hailed by Netizens for showing bravery and quick thinking. Though the reason for the attack is yet unknown. 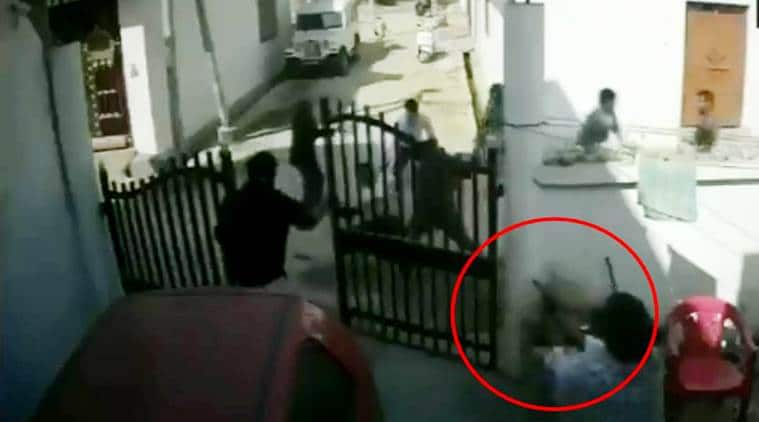 Being hailed as Revolver Rani, the woman threatened her husband’s assailants with a gun, scaring them off and possibly saving his life. (Source: ANI/Twitter)

In what looks like it could possibly be a scene from a movie, video footage of a man being attacked by unknown assailants in Lucknow’s Kakori district and then being rescued by his gun-toting wife has been shared by news agency ANI.

In the video, which is creating quite a buzz online, with people calling the woman ‘Revolver Rani’, the man seems to be casually talking to someone outside his house when a group of four men – two of their faces covered with handkerchiefs – appear out of nowhere and start beating the man up. One even gets a rod to add to the violence.

Upon hearing the ruckus, a woman – apparently the victim’s wife – appears from within the house brandishing a gun and aims it at the assailants. Scared, the men run away, leaving the man injured and with his clothes in tatters. Going by the time stamp on the CCTV footage, the incident took place on February 4, at 11.20 am.

According to the ANI tweet, the police has begun an investigation on the attack. In the meanwhile, people on social media have been praising the wife, while some brought up the debate of gun rights. Though, the reason for the attack is unknown.