‘Indian version of La Tomatina’: Video of people smearing cow dung on each other goes viral

Every year, the villagers collect dung from about 3,000 animals in and around Gumatapuram to celebrate the festival. 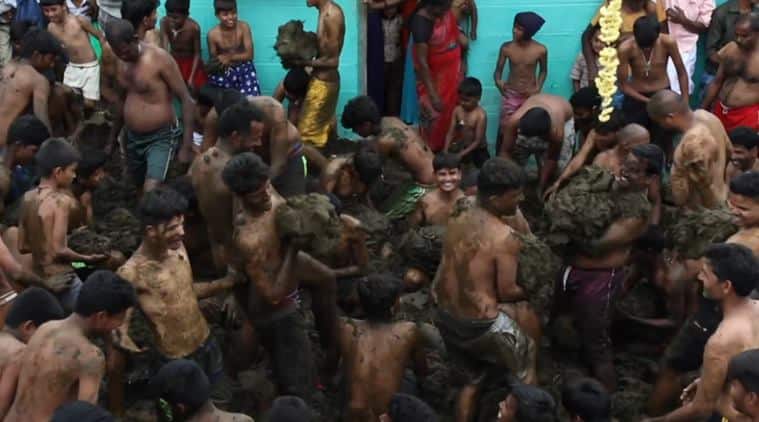 Men smear cow dung on one another every year hoping it will bring good health to them.

A video of the residents of Tamil Nadu’s Gumatapuram enjoying a festival in which they smear cow dung on each other is going viral. The festival is locally known as ‘Goraihabba’ and involves the villagers throwing and putting cow dung on each other after collecting it from all cattle farmers. The video prompted comparisons with the famous La Tomatina festival in Spain, which also featured in the film Zindagi Na Milegi Dobara.

The annual festival is held every year in the southern town and the video shows how people celebeate it. The villagers collect dung from about 3,000 heads of cattle in and around Gumatapuram and then pile it near the Beereswarar Temple for the celebration.

An individual participating in the festival is heard saying in the video that using cow dung on the skin ensues “good health”.

“Cow dung is very natural and has a lot of medicinal benefits. Others might say if we throw cow dung at each other we will get some infections or even some disease. But with the trust of our god Beereshwara, we are playing in the cow dung, so nothing happens to us,” a man identified only as Prabhu says in the video.

Past reports said the festival was celebrated by Kannada residents of the town and was started to appease the wishes of the spirit of a village shepherd.

While the festival in this Tamil Nadu town takes place days after Deepavali, a similar festival is held in Kairuppala village in Andhra Pradesh’s Kurnool district. The  festival called ‘Pidakala War’ is hosted in late March or early April to coincide with the Kannada new year.

The festival also involves people throwing cow dung as a recreation of a mythological dispute that took place a day after the festival of Ugadi. According to local legend, Lord Veerabhadraswamy wanted to marry Goddess Bhadrakali but there was opposition to the wedding and it led to a dispute, and a fight with cow dung. Devotees believe that the practice brings health, prosperity and rains to the villages.