Many wondered if someone was actually inside the vehicle when it went down the sinkhole. However, nobody was injured in the incident, news agency ANI reported. 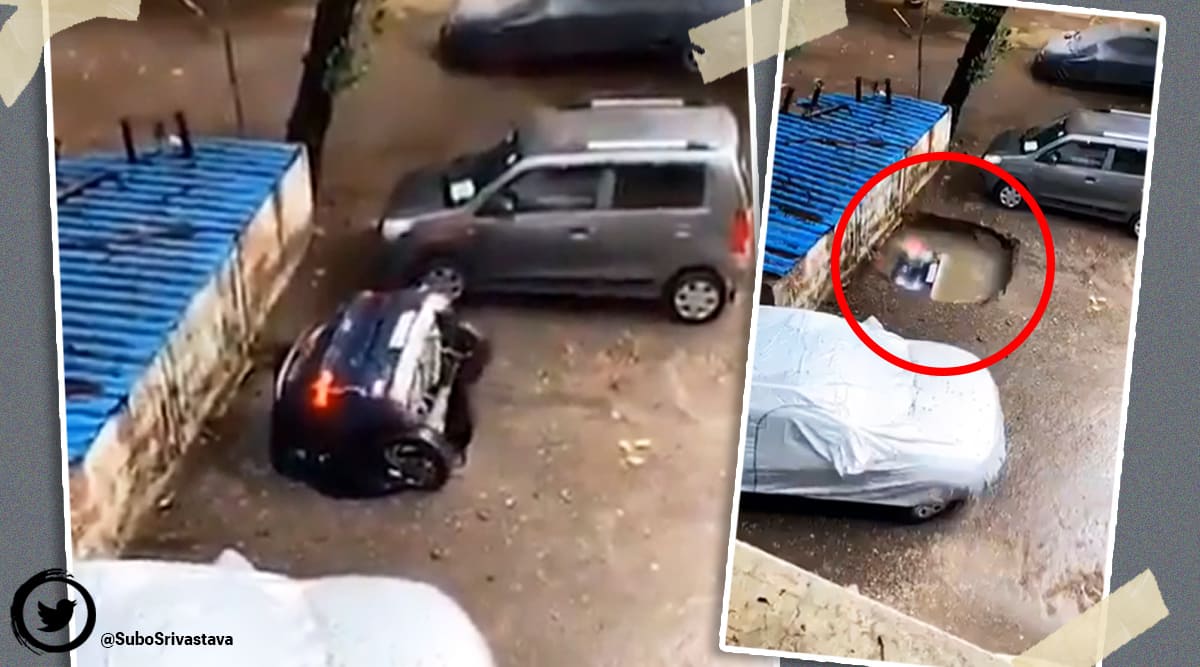 The scary moment was caught on camera by an onlooker and it quickly went viral.

A video of a Hyundai Venue car sinking into a caved-in portion of a parking lot on the premises of a Ghatkopar residential society went viral on social media on Sunday.

A 67-year-old doctor, also the car’s owner, shot the incident that lasted for less than a minute. Police said the parking area was constructed over an old well in Ramnivas building.

By evening, the authorities started the process of pumping water out of the collapsed portion of the parking space to locate the car. The traffic police authorities, with the help of the BMC officials, managed to remove the car from the well around 9 pm.

An officer said, “We removed the water from the well using pumps and after we spotted the vehicle, we lifted it with the help of a crane.”

The car’s owner Dr Kiran Doshi said, “While leaving for work, my son uses the car.”

#MumbaiRains
Car swallowed completely by a sinkhole in residential complex in Mumbai.. Later discovered that it was a covered well under a parking lot! pic.twitter.com/nvLct0QqfU

As it was a weekend, Doshi’s son Tapan was at home. Around 8.30 am, Mahadev Shigwan, who washes the cars of the residents of Ramnivas building, noticed that a portion of the concrete compound was caving in.

“He raised an alarm, after which I rushed to the spot and saw that the car was sinking into the well. Then I shot the video,” said Doshi.

The residents said the building was constructed more than 80 years ago and the concrete portion around 40 years ago. It was built over a well that supplies water to the residents of Ramnivas building.

Maharashtra: A viral video shows a car sinking in a sinkhole in Mumbai’s Ghatkopar

Traffic Police says,”There was a well at the place. Some people covered it with concrete slab&started parking cars over it. Incident occurred due to land subsidence following rain. No one injured” pic.twitter.com/N8Tys2BrUY— ANI (@ANI) June 13, 2021

“Half of the well was covered with the concrete portion, while a part of it was kept open. Everyone parks cars there, and this is the first time that a portion of it caved in,” said Doshi.

Senior Police Inspector Nagraj Manjre of the Ghatkopar traffic division said, “We think that the concrete structure weakened over the years and heavy rainfall led to the incident.”

Meanwhile, the BMC in a statement said the incident has nothing to do with the civic body as it happened on a private housing society’s premises.