CEO Nithin Kamath has promised half a month's salary as bonus to all employees whose BMI is under 25. 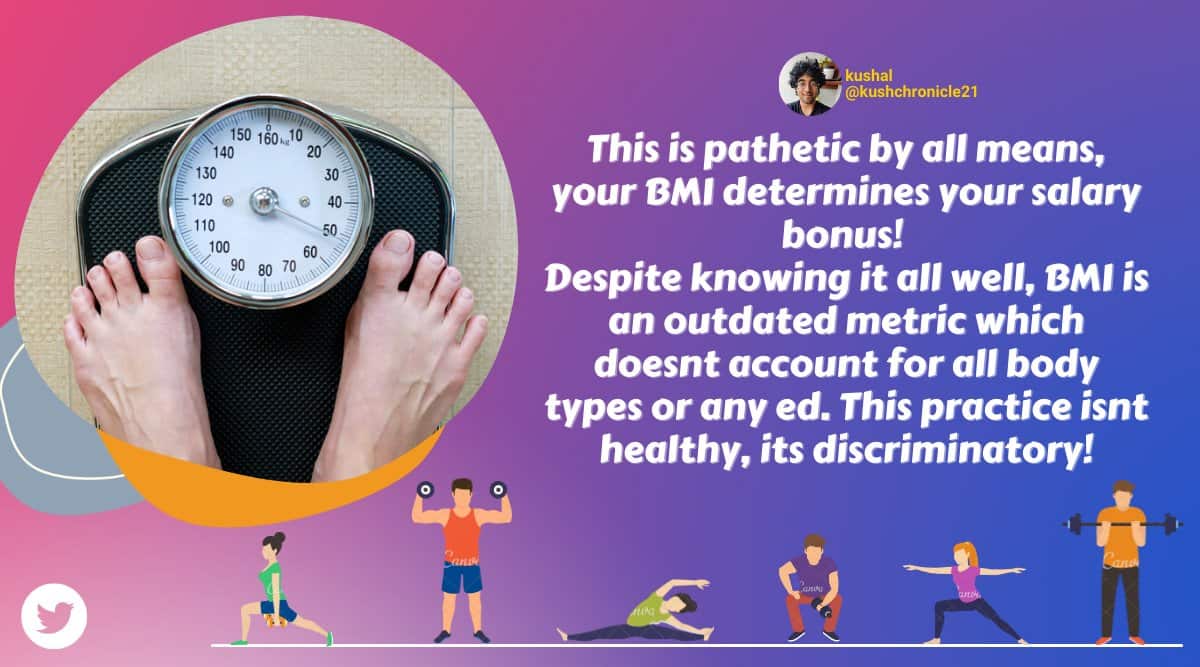 Zerodha founder and CEO Nithin Kamath announced a new health initiative for his company’s staff on World Health Day. Challenging all employees, Kamath said anyone with BMI (body mass index) of less than 25 will get half a month’s salary as bonus. He also announced benefits for staff members who will lose weight. However, not everyone is thrilled by the idea and netizens are weighing in if the initiative will push people toward fatphobia and body image issues.

Taking to social media, Kamath said anyone will be eligible to get half a month’s salary as a bonus, who has a Body Mass Index (BMI) of less than 25. He further added that the average BMI of their team is 25.3 and if they can get it down to 24 by August, “everyone gets another 1/2 month as a bonus”.

Announcing the new ‘fun’ health program at the company on the occasion of World Health Day, he wrote: “It’d be fun to compete with other companies”. Explaining the initiative, he further wrote that the lowest average BMI or the largest change in average BMI will win the competition. “The winner chooses a charity everyone else contributes to. Maybe a health tech company can run the initiative,” the 43-year-old CEO wrote in his post.

The post soon got attention across social media sites as netizens shared their thoughts. Some also claimed that BMI may not be the healthiest parameter and may not be an inclusive idea. However, Kamath defended his stance saying that BMI is the easiest way to get started.

The challenge can be seen as an extension of the company’s existing wellness programme. Last year, Kamath had announced that they are starting a ’12-month get-healthy goal’ programme, encouraging people to prioritise health amid the pandemic when most people were leading a sedentary lifestyle.

To create accountability and to increase participation, the CEO had announced that everyone who reached the goal would get 1-month salary as bonus and would be eligible for a lucky draw for Rs 10 lakhs. Calling the previous effort a success but not “broad-based”, he assured this will be just an extra bonus over other incentives that employees get.

Last year we let everyone on the team set health goals & ran a lottery amongst those who met their goals for Rs 10lks. Was successful, but the participation wasn’t broad-based.
We ran online yoga sessions & made mental health counselors available for the team during lockdowns 2/5

And this is just an added bonus over and above all other bonuses & incentives that everyone on the team earns. Just like that Rs 10lk prize pool for the lottery we ran last year to pick one person amongst everyone who met their health goals. 5/5

While the move last August was hailed by all, the current initiative generated a mixed response online. Here’s what netizens had to say about the health challenge.

The idea is good, but sudden focus on health backed by monetory reward may increase the risk among people who have been lazy for years. Old engines take time to start. 😃

Though In my case, I had suggested, they would have to undergo a fitness test. 5km fun, followed by 25 pushups and 5 pullups. Instead of BMI you should test for hba1c levels, better indicator of health and diabetes

BMI is one of the most redundant ways to measure health or incentivise it. Just because it is easy doesn’t mean it’s right. You can easily have a physician in house on board to develop such a program that helps your team but that takes effort just as maintaining health does.

This is a completely non-inclusive endeavour and it won’t be sustainable. Rewarding physically capable people financially will only serve to demotivate others.

Totally agreed. The proposed challenge is pretty toxic, demeaning, demotivating & doesn’t promote overall well-being of all the employees in the organisation creating differences, discontent & propagating into self doubt, anxiety & what not if they are already at the edge.

Really sorry to say this, but this is a terrible execution of a good intention.

Please reconsider this instead of giving much anxiety to anyone who might have an eating disorder, is uncomfortable about their bodies or 100 other issues you might not know about.

And at the worst, can even lead to eating disorders or mental health issues.

I’m a corporate wellness coach working extensively on health at every size. I could help with better goal setting to be more inclusive and less problematic goals.

Good initiative, but best way to implement this, nowadays every smartphone counts the daily steps plus how many calories burned. So those who can walk 10000 steps daily plus their BMI can help to track the exact winners.

This is literally the capitalist version of a hamster wheel. https://t.co/vXrGxRr3Cp pic.twitter.com/Jj11b2QNk2

Wow i thought zerodha was a nice company to work at. Wtf is this.

What about employees who might have some chronic condition and are not be able to make the target BMI? Or do you not hire people above a certain BMI to begin with? https://t.co/E318zx2vTR

This is pathetic by all means, your BMI determines your salary bonus!
Despite knowing it all well, BMI is an outdated metric which doesnt account for all body types or any ed. This practice isnt healthy, its discriminatory! pic.twitter.com/hJMtqwfRk8