Featuring Mamata Banerjee in her signature white cotton saree, donning a face mask -- waving at the cameras, the dairy brand also featured Amul Girl as a photojournalist on the stage in the topical. 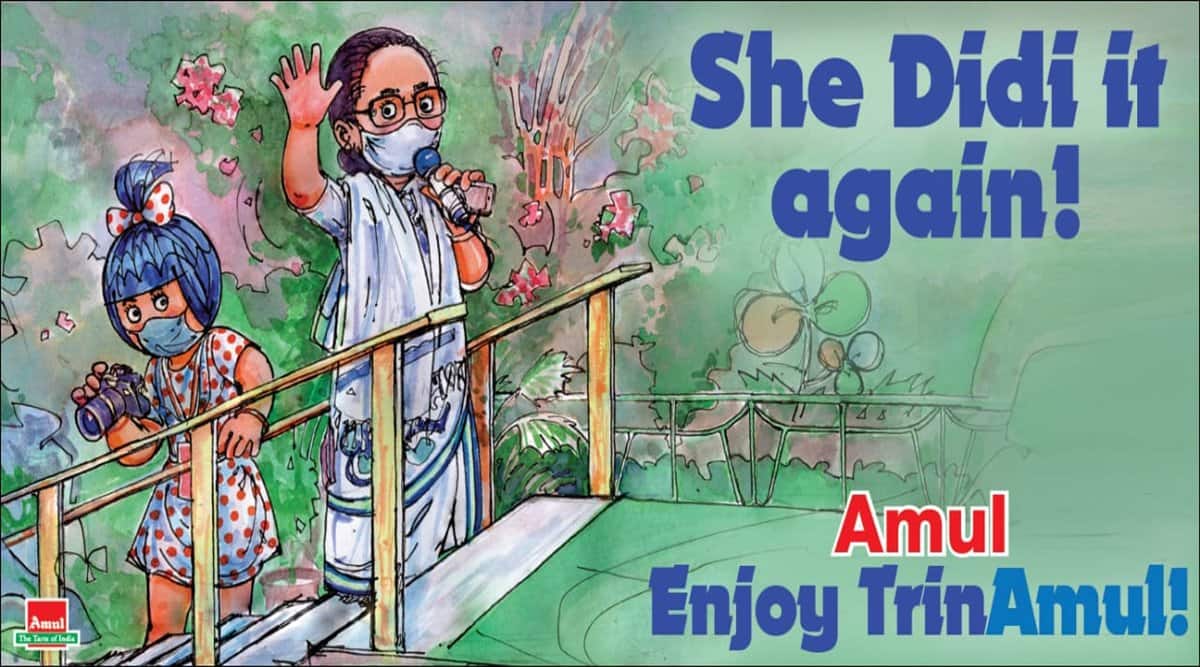 “Banglar joy. Bangla-i pare (This is the victory of Bengal. Only Bengal could have done this),” Banerjee declared after winning. (Source: Amul/ Twitter)

In a bitterly fought polls — marred by violence and the second wave of coronavirus pandemic — Mamata Banerjee’s Trinamool Congress (TMC) emerged as winners in the recent West Bengal Assembly Elections 2021. As people around the country celebrated the victory, Amul too joined in with a cartoon.

Banerjee, who made history in 2011, ending the mammoth 34-year rule of the Left Front in the state, is on her way to etch another record as she is all set to take oath as a chief minister for the third time. Fighting anti-incumbency factor, a wave of desertions within the party, and the giant BJP election machinery led personally by Prime Minister Narendra Modi and Home Minister Amit Shah — she crossed many hurdles, however failed to win her seat in Nandigram.

But focusing on the party’s victory at large and accepting people’s mandate, she vowed to focus on Covid war and not celebrations. Seen without a wheelchair for the first time in a few weeks, Didi stood before people and declared ‘Khela sesh (game over)’.

The Amul topical features the party chief in her signature white cotton saree and a face mask as she waves at the cameras. The dairy brand also featured Amul Girl as a photojournalist on the stage. Cheering for Banerjee, they wrote: “She Didi it again”. And carrying on with their play of words in their topicals, the brand known for puns added: “Amul — Enjoy TrinAmul!”

Calling the TMC’s win a “victory for the people” of West Bengal, Banerjee on Sunday said that she was proud to say that the people of her state have “saved the country”.

“Two slogans — ‘Khela hobe’ and ‘Joy Bangla’ — worked well for us. Bengal won the match. We will distribute 50,000 footballs among clubs in rural Bengal,” she said.

The Trinamool Congress won or was in 213 of the 292 seats that went to polls in West Bengal’s extraordinary eight-phase election. For the first time in West Bengal’s history, the Left and Congress will have no representation in the Assembly.