Sridevi’s death: #LetHerRestInPeace trends on Twitter as Tweeple urge for speculation to end

Sridevi passed away late on Saturday (February 24) in Dubai while she was with her husband Boney Kapoor and daughter Khushi. However, such has been the extreme nature of "decoding Sridevi's death mystery" that online crusaders had to counter-balance the waves of insensitive speculation with the hashtag #LetHerRestInPeace. 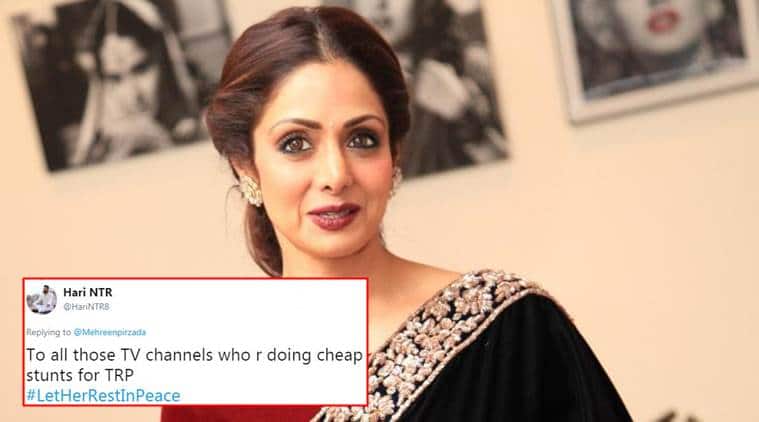 People on social media are now calling out the insensitive way Sridevi’s death has been reported.

Few things in the last couple of days jolted people more than the news of Sridevi’s death. The Bollywood actor passed away late on Saturday (February 24) in Dubai, while she was with her husband Boney Kapoor and daughter Khushi. The news came as a shock to the world. Initially, the cause was said to be cardiac arrest, which was later confirmed as accidental drowning by the forensic report, but what has come to the fore amid all this speculation is the rather worrying aspect that a public persona’s life – and, in this case, death – is not out of bounds for general speculation. Such has been the extreme nature of “decoding Sridevi’s death mystery” that online crusaders had to counter-balance the waves of insensitive speculation with the hashtag #LetHerRestInPeace.

Since Saturday, the cause of the Bollywood legend’s death has been discussed and debated ad nauseum. From a Facebook forward — which was being circulated on several platforms within hours of her passing — that commented and speculated that her untimely death could have been a result of the impossible standards that people of her stature have to adopt to look THAT perfect. This was when she was thought to have died of a cardiac arrest. To the attempted recreation of the ‘bathtub scene’ and the reasons that could have led to her accidental drowning. 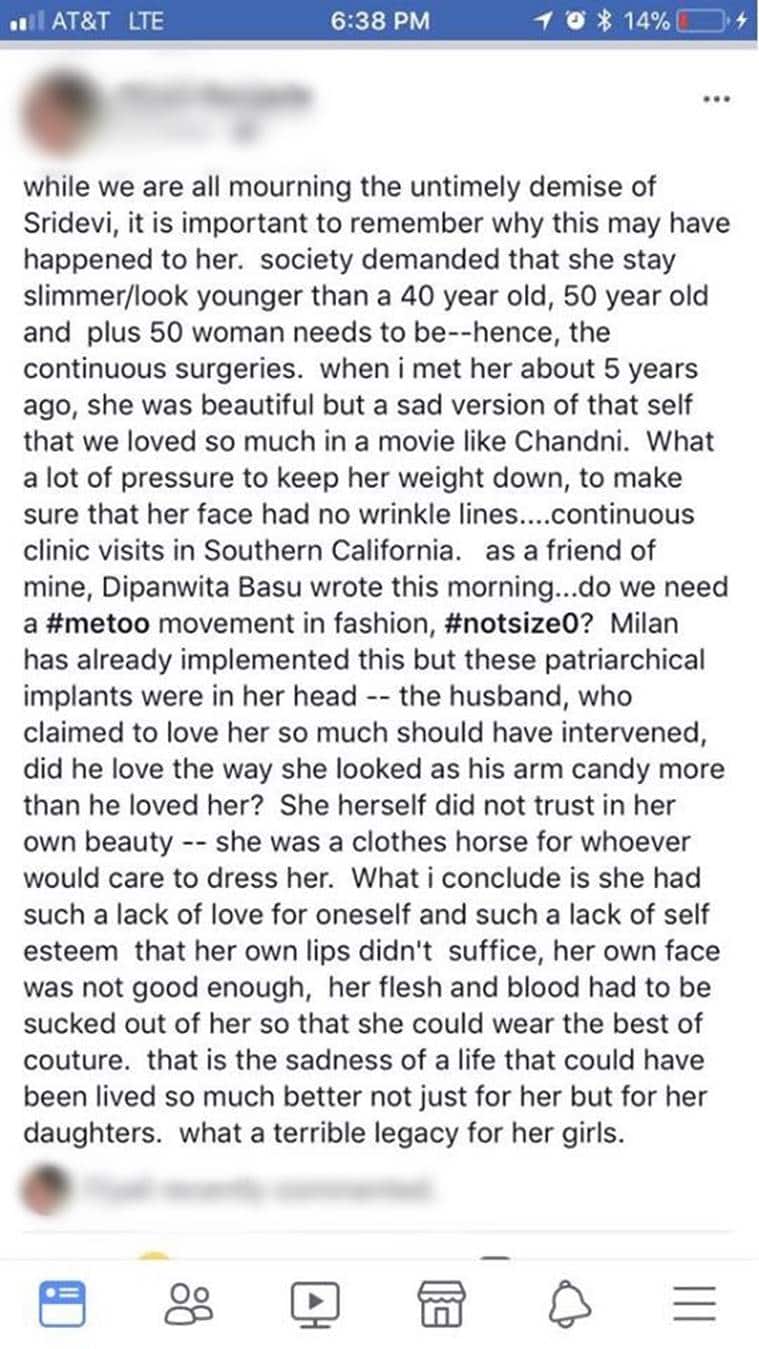 Such forwards and speculations regarding Sridevi’s death are still doing the rounds.

Such minute-by-minute report by media houses, compilation of unknown facts about the actor and moving obituaries have sparked an outrage among others who have now taken to the same medium in an attempt to put an end to what has been deemed as undue sensationalism, something anyone — let alone an actor of Sridevi’s stature — does not deserve. People on social media are now calling out such insensitive reportage without mincing words. While one wrote, “Very sad the way all speculation surrounding the death.Media pls have a heart,wait for all facts to come in, empathise with the family members,please. My heart goes out to daughters….Pls stop ur investigative stories,ur life lessons please,” another tweeted, “some news in media going in wrong way so please I request them to stop”.

Actor Renuka Shahane too took to Facebook to call this out. “Dear News Channels, please allow Srideviji’s soul to rest in peace,” she wrote, adding, “Live your lives the way you want to but let others live their lives the way they choose to and for heaven’s sake, let them be in peace after they have passed away.”

Here are some of the tweets urging people to respect the demise of a much-beloved actor and let her memory not be marred with speculation about her lifestyle.

I feel sad that some sections of social media are still making speculations about the demise of #Sridevi which are baseless and irresponsible. I appeal to all to respect sensibilities and just #LetHerRestInPeace pic.twitter.com/FcROGryuva

Guys, Please🙏🙏
Stop spreading speculation rumours. At Least, For all the entertainment that she has provided to us, please #LetHerRestInPeace pic.twitter.com/0IPOZVpnSR

Never expect such kind of insensitive reporting and anchoring from media houses. Sometimes, media houses go beyond to get the TRP’s. Shameful. #LetHerRestInPeace pic.twitter.com/cdw4CfUHf8

To all those TV channels who r doing cheap stunts for TRP#LetHerRestInPeace pic.twitter.com/2Nd9pfjX8k

“Dear News Channels, please allow Srideviji’s soul to rest in peace?? Please allow her family, friends & fans to grieve in peace ?? Imagine if it was your family member! Would you like a dissection like this about your loved one? Please have a modicum of respect for one who has passed ?? There is a thin line between news and salacious gossip. Do not be so disgusting. And all those writing Facebook posts with great concerns about “health” issues and other “cosmetic changes” that could be detrimental for health; would it be possible for you to wait at least for some time before passing judgement and giving unsolicited advise? Discuss it among your family and friends if it is that important to you. Live your lives the way you want to but let others live their lives the way they choose to and for heaven’s sake, let them be in peace after they have passed away.”