While the performance of the Indian women's cricket team at the ICC Cricket World Cup 2017 was unanimously lauded, Shobhaa De's rather scathing comment on the Indian men's team has not down gone too well with people on social media. 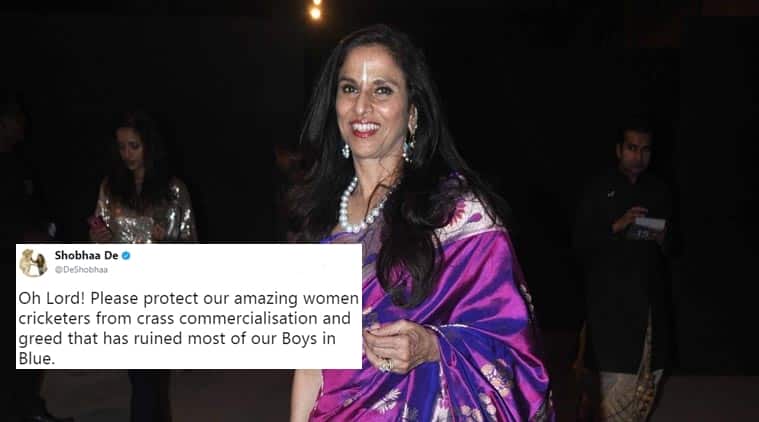 Shobhaa De’s jab at the Indian men’s cricket team has not down well with people. (Source: Shobhaa De/Twitter)

It is no secret that Shobhaa De is fiercely outspoken. It is also no secret that this has often landed the columnist and author in hot waters on social media. The latest instance is her tweet on the Indian women’s cricket team. After their phenomenal performance, the girls have been receiving several accolades but the author seems rather sceptical.

On August 1, the author tweeted, “Oh Lord! Please protect our amazing women cricketers from crass commercialisation and greed that has ruined most of our Boys in Blue”. Well, this didn’t go down to well with tweeple. While the performance of the Indian women’s cricket team at the ICC Cricket World Cup 2017 was unanimously lauded, the author’s rather scathing comment on the Indian men’s team has not down gone too well with people on social media. From calling her a “useless and workless page 3 columnist” to politely bringing to her attention that women too can, and must benefit from their success, the reactions are varied but not really in compliance with her.

This is what she tweeted.

Oh Lord! Please protect our amazing women cricketers from crass commercialisation and greed that has ruined most of our Boys in Blue.

And soon she was bombarded with trolls.

Here are some of the reactions.

Why should the women not benefit from their stardom?

He does have a point.

You are right Mr @TusharG.Mr Sachin Tendulkar managed a commercial-professional life balance for so many years.Why not the women.

Thats below the belt madam. You can be appreciative of women without pulling the men down

The fans were clearly having none of it.

Which boy is ruined Mam? If I remember right their last few years performance is better than ever. I heard even writers r now paid well

Not expecting you to motivate anyone .. but pleae don’t demotivate ….

At least our amazing women cricket team is getting some recognition, love , money, that they deserved but we failed to give them.

It cannot get more stupid and selfish than this. Why would u want to stop them from earning money? https://t.co/zRUVSdsSzz

So only the boys can get rich and the girls don’t. Go girls.

This did seem coming.

Crass commercialisation? Is that what you call it when you market your books. Very unfair Comment coming from you who edited commercial mags

This clearly is not the first time the author has landed in trouble due to her comments. Earlier she had fat-shamed a Mumbai cop and in another instance had asked Sushma Swaraj to stop tweeting. In both the cases the author was mercilessly trolled for her ‘problematic’ tweets. In fact she was also criticised for referring to PV Sindhu as a “Silver Princess” after the Olympics last year. Oh well, what would one do without controversies, right?!

Heavy rainfall lash many parts of Haryana and Punjab