'When you start thinking of your future while taking bath.' 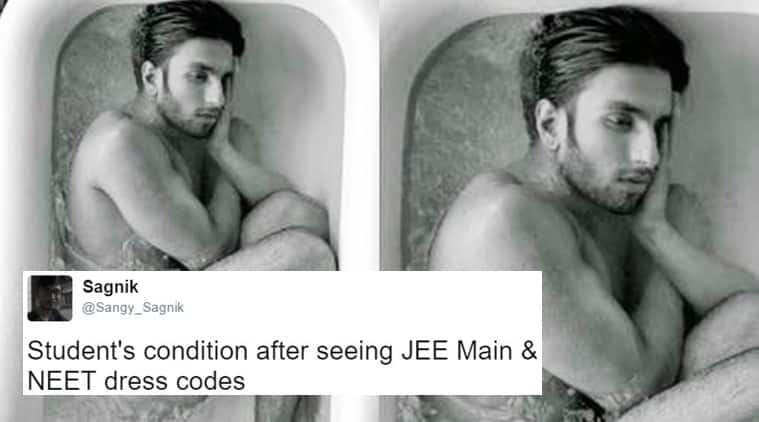 Ranveer Singh is making news — this time, for not wearing any clothes at all! (Source: Harami Parindey/Twitter)

Other than being the wonderful actor he is, Ranveer Singh is known for his eccentricity, his enthusiasm and for ‘dating’ one of the most beautiful women in the industry, Deepika Padukone. But often, his quirky fashion sense has also managed to hog quite some limelight of its own. The Befikre actor has earlier made headlines for his unconventional fashion choices — remember the sheer black ‘salwar kameez that he borrowed from Deepika Padukone’ or a white hoodie outfit that made him look like a ‘walking plastic bag‘? Well, this time Twitterati is going crazy over a picture of the actor, but not because he is wearing something quirky! In fact, because is lying in a tub full of water umm. … butt naked.

ALSO READ | Ranveer Singh in yet another weird outfit, Twitterati go nuts figuring out why

Here are some of the hilarious reactions the picture has generated on the Internet.

Some one told him to wear sober clothes that day. pic.twitter.com/AxLsjqySY2

When designers had no new designs left to try out. pic.twitter.com/QzeOXYhcTw

When you start thinking of your future while taking bath :( pic.twitter.com/MQfoeaPi94

When Mom wakes you up at 4AM & asks you to take bath. pic.twitter.com/o9HYqgN8rH

When you accidentally send the ss of ur crush’s chat to ur crush instead of your best frnd. pic.twitter.com/5sS312ZpcE

ALSO READ | Ranveer Singh in yet another weird outfit, Twitterati go nuts figuring out why

A still from his movie Befikre that co-starred Vaani Kapoor, the actor’s but-naked pictures made headlines even before the film released. It seems, the diligent people on the Internet dug up the photo again and are busy giving it hilarious captions. From comparing a morose looking Singh to the situation of students “after seeing JEE Main & NEET dress codes” to giving the photo captions like “When you accidentally like her 230 weeks old picture while stalking Instagram”, “When you accidentally send the ss of ur crush’s chat to ur crush instead of your best frnd”, it seems Twitter users had a field day with the pictures.

Have something funny to say about the pictures? Let us know in the comments’ section below.