Some said the timing of the tweet was poor given festivals are being celebrated, while others dared the handle to post pork recipes. However, people pointed out that the Kerala Tourism handle has tweeted pork recipes and the consumption of the meat isn't barred in the state. 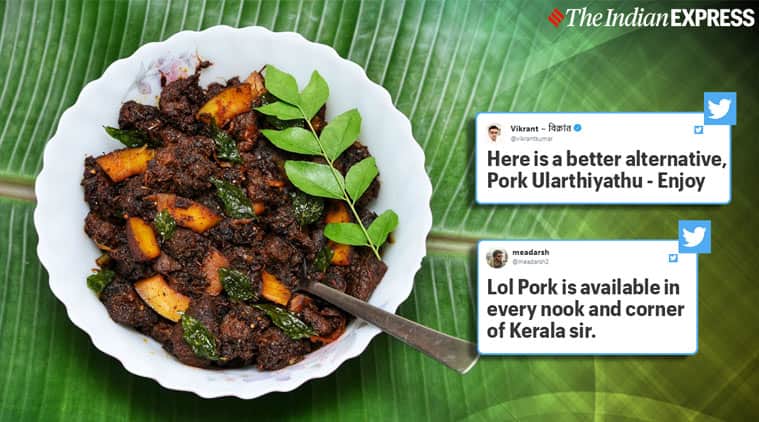 A photo of a popular delicacy ‘Beef Ularthiyathu’ by Kerala tourism handle started a row online.

A tweet by the official handle of the Kerala Tourism – that was about a beef dish consumed in the state – ended up sparking a war of words on Twitter.

On Wednesday, @KeralaTourism posted a photo of popular local delicacy ‘Beef Ularthiyathu (beef fry)’, with a link to the recipe on their website. However, many people claimed the tweet ‘hurt their religious sentiments’ since it contained a photo of beef.

Tender chunks of beef, slow-roasted with aromatic spices, coconut pieces, and curry leaves. A recipe for the most classic dish, Beef Ularthiyathu, the stuff of legends, from the land of spices, Kerala: https://t.co/d7dbgWmlBw pic.twitter.com/aI1Y9vEXJm

Pls be culturally sensitive abt special holy days of all faiths

are you out of your mind? on Pongal and Sankranti when we revere Cows, Oxen, and Cattle for their contribution to mankind’s easy existence and culture…on one hand we have Gangireddula meLam in Telugu states, Jallikattu in TN, and Kambala races in Karnataka and you showcase this

Today is day we worship the holy cow. And this tweet is timed to outrage the Hindu belief. @narendramodi @HMOIndia to kindly take this seriously as an attack on our culture. @Twitter this is worse than abusing. Hope this account is banned forever.

Others dared the official handle to post photos of pork dishes since they believed it would offend members of the Muslim community. However, many Malayalis pointed out that residents of the state also consume pork and there is no bar on its consumption. Others shared screenshots of pork recipes available on the website.

Come to #Assam and take the taste of smoked Pork, it’s great to taste…..you can try Pork with bamboo shoots also. pic.twitter.com/XTVPDT9NTM

This is nothing but provocation. You people don’t want people from North India to visit Kerala? Why this beef promotion? People visit to Kerala just to eat beef? Try promoting Pork for a change, you will get a taste of your medicine.

Blatantly and shamelessly anti-Hindu Kerala should be avoided by all Hindus!

Hey @KeralaTourism, show some pork dishes if you have guts. https://t.co/PYXmZiBQJe

Others pointed out that people in the state decide what to eat and not because there’s a law dictating their food choices. In many states, the slaughter of cows and bulls is banned.

To those who say Malayalis have an issue with pork meat, these 11 seconds should tell you how mainstream pork meat is in Kerala.

We eat what WE want to. We need no permission, no certificate from anyone. https://t.co/C44NxhgTQ2

Lol Pork is available in every nook and corner of Kerala sir.

Pork or Beef all is a dish.
choice is for everyone which dish they want to eat.

We malayalees eat pork too..and nobody will get killed for having pork or beef here u cowdung moron 😁🤗🤗

Bro, come to kerala you’ll get pork anywhere, pork is not banned in kerala. If pork fry is displayed in this site instead NP. Cheers.

Beef and pork is eaten equally in kerala u dumbo

Most of the northies comments mentioning about pork….
People we ate pork also, no one banned pork here.
But beef is the best😋😋😋