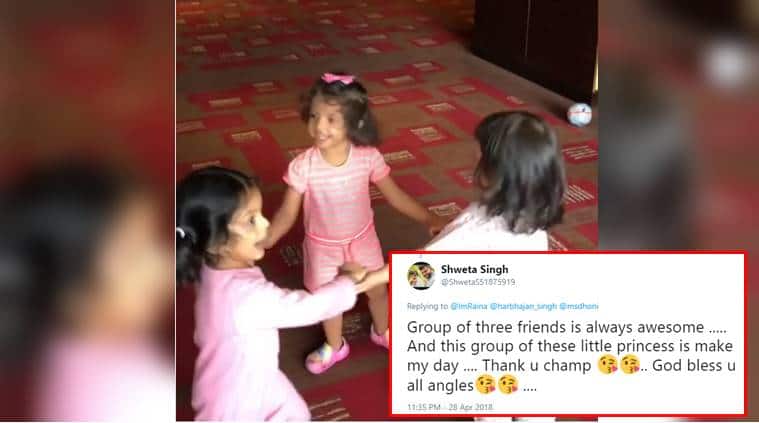 If you are a cricket fanatic, then you would be abreast about the nail-biting matches and epic moments in the Indian Premier League 2018. As we move forward to the finale, the thrill and fun is all set to double up. Amid all the chaos, it looks like the families of cricketers are also bonding as the players put in all their power on the ground.

In an adorable video posted by Suresh Raina — who is currently playing for Chennai Super Kings — the kids seem to be carrying the legacy of their fathers’ friendship forward. Ziva, Gracia and Hinaya can be seen playing together and going around in circles while holding hands on the old English poem ring a ring ò roses.

However, this is not the first time that the kids were seen spending quality time together. Recently, MS Dhoni and Suresh Raina’s daughters gave their fans major BFF goals.

Raina tweeted a picture in which the duo was seen deeply indulged in their gadgets. “The new BFF in town!! Gracia and Ziva currently busy looking at last night’s match highlights on their tablets”, Raina tweeted.

Netizens too enjoyed the overdose of cuteness on the Internet.

And that ” Yeaahh” from you made my day @ImRaina ❤😍

Group of three friends is always awesome ….. And this group of these little princess is make my day …. Thank u champ 😘😘.. God bless u all angles😘😘 ….

Cuteness Overloaded.
Gracia the Cutest than All ❤️❤️😍😍😍

Do you think these girls will take their friendship forward just like their dads? Share your thoughts in the comments below.

PM Modi has a challenge of his own for Rahul Gandhi: Speak for 15 mins on Congress’ achievements in Karnataka