The Kerala Police's official Facebook handle presently is the most liked and followed police department on Facebook. The TikTok account has already got 1.5 lakh followers in just two days. 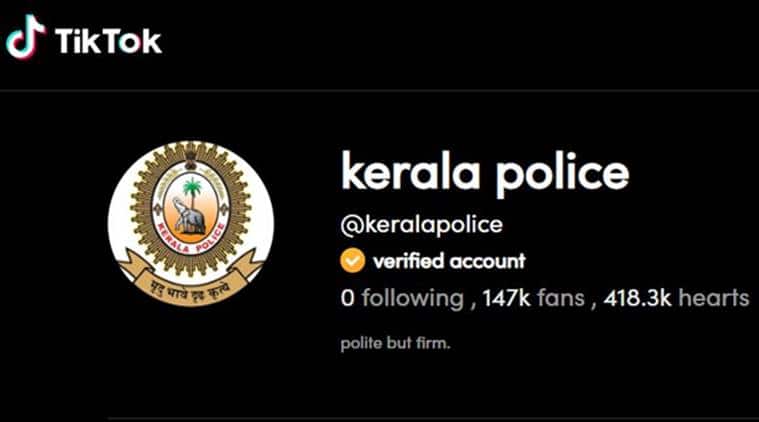 In an attempt to strike a chord with the commoners and erase the line of fear, they have blessed the lip-singing app with their presence. (Source: TikTok/Kerala Police)

The police force has seen multiple social awareness campaigns strike gold on social media platforms. And the decision to expand their social media presence was announced by the Kerala Police on their official Facebook handle.

TikTok India also officially welcomed the Kerala Police on Twitter and said their presence on will inspire millions of youth to learn from the bravery and diligence that inspire the nation.

സ്വാഗതം!
We welcome @TheKeralaPolice to TikTok. Your presence on TikTok will help inspire millions of youth to learn from the bravery & diligence that inspires the nation.
Follow their official TikTok account: https://t.co/oYbyvjfsDG

Check out the videos by Kerala Police on TikTok here:

Incidentally, the Kerala Police’s presence on social media comes even as other police forces have imposed curbs on the use of TikTok.

Gujarat DGP Shivanand Jha recently issued a circular saying that police personnel, even if not on duty or in uniform, should abide by the code of conduct deemed appropriate for them as a member of the police force. The circular came after TikTok videos of at least five police personnel from Gujarat surfaced last week, becoming a hot topic of debate even as action was taken against four of them.

Ayodhya: Where idea of ‘negotiation’ originated, how ‘mediation’ has always failed