If you have spotted green, grey and yellow boxes on social media, you have already been acquainted with the internet's current obsession. Let us fill in the rest of the blanks in this piece. 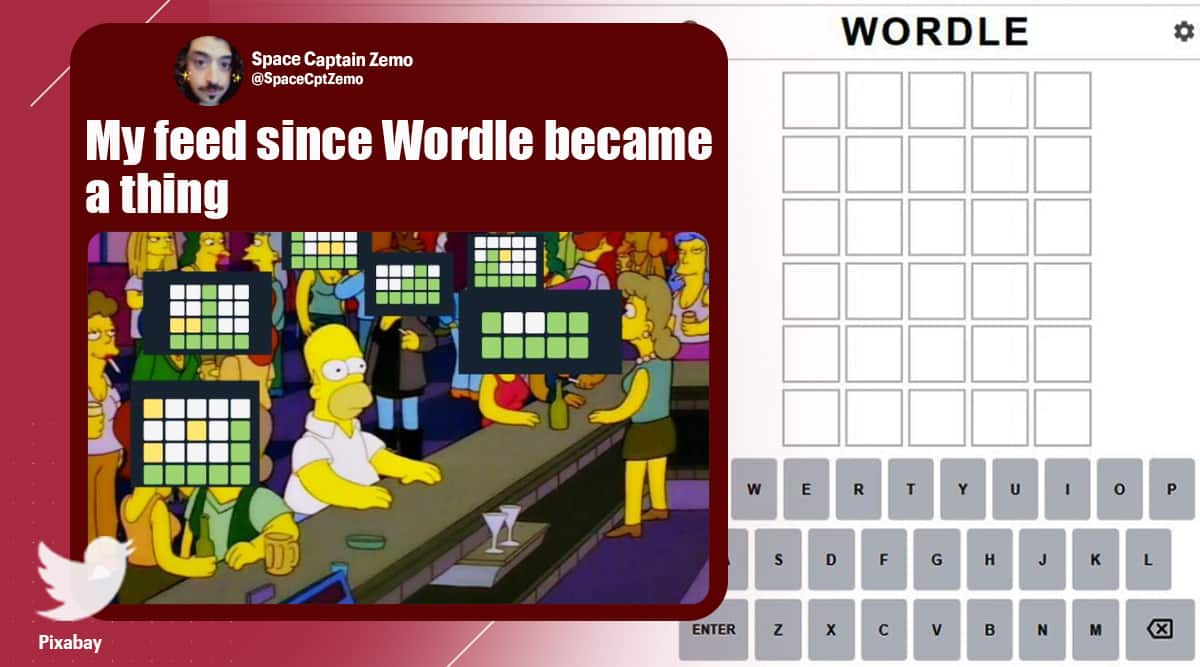 Netizens’ obsession with puzzles and games is undeniable and the latest that has hooked people worldwide is called Wordle. Even if one hasn’t played it yet, it is hard to dodge past the game on the internet with Wordle score cards and tweets clogging Twitter.

Developed by a Josh Wardle, a Brooklyn-based software engineer, players need to crack a secret 5-letter word of the day in six attempts. Rules are quite simple, but what makes it so treasured is the fact that it can be played only once a day, only giving option to redeem one’s self the next day. You can find the daily online word game here.

With no app, and just a simple link to a website, gamer takes turn to fill out the boxes with any random 5-letter word. As one enters the words, the game tells the player if the alphabet is present in the final word and about its position.

For every correct guess, the box turns green if the right alphabet is in the correct place; it turns yellow if the alphabet is correct but the position is wrong. Grey is to indicate the alphabets are not included in today’s Wordle of the Day.

Here’s an explanation from the developers in case you’re interested.

Why it was created?

Talking to the New York Times, Wardle said game was made for his partner Palak Shah, who loves word games. Created as a guessing word game just for the couple, the name is a wordplay on his own surname.

Although it wasn’t meant for a formal release to the world, he noticed interest among others after it was a hit in their family’s group chat and among relatives.

“I think people kind of appreciate that there’s this thing online that’s just fun,” Wardle told the newspaper. “It’s not trying to do anything shady with your data or your eyeballs. It’s just a game that’s fun.”

Almost hoisted by my own petard

Although he is no stranger to creating hit content for social media after his successful stint at Reddit, this time the superhit game was a result of his own individual effort. According to NYT, Wardle said a similar prototype of the game was first created in 2013, however, as it left his friends unimpressed, he scrapped the idea.

In 2020, when pandemic hit, after Shah “got really into” Spelling Bee and the daily crossword, “so I wanted to come up with a game that she would enjoy,” he said.

Now, moving beyond his close circle within just two months after releasing it to the world, the game has over 300,000 players, the report said. And the interest is quite visible online, at least on Twitter where Wordle has been dominating conversation.

The avid interest in the game, not only led other developers to build games that has more than one-play-a-day but memes and jokes on social media as well. “It’s something that encourages you to spend three minutes a day,” Wardle said. “And that’s it. Like, it doesn’t want any more of your time than that.”

Although he recently introduced the score sharing option to the players, the mysterious aura isn’t spoiled as it just allows people to share the colourful tiles and not the words.

While some bragged about their score, others tried to capture their feeling about how difficult the brainy game might get. Many users simply shared memes, not even playing the game once after their timeline was filled with colourful mosaic boxes from the word-game.

I mean, just because EVERYONE else is playing it.

Look, I don’t want to call myself a “hero” but…

And even though it’s meant to be anti-additive, people surely can’t get enough of it. Check out how people are reacting to the game.

Us squeezing our last two brain cells to figure out the right combination of letters when #wordle throws a few yellow squares at the fifth turn, pic.twitter.com/BkAFL1z9fp

Me after learning a new word on Wordle pic.twitter.com/Zv1GlytsDl

Wait, were Imperial officer ranks assigned based on how good they are at Wordle? pic.twitter.com/Us12kldWQ3

My feed since Wordle became a thing pic.twitter.com/Y2qGW9p13w

roasting my friends for their wordle tweets when im doing it too but not tweeting my scores pic.twitter.com/UyOMYFFvXp