Unbelievable! A woman rushed to firefighters to save her ‘stoned’ raccoon

Wayne Township firefighters were awakened by a woman in the dead of the night to seek treatment for her pet animal who had fallen sick. Well, it wasn't health issues but her raccoon had smoked way too much marijuana. 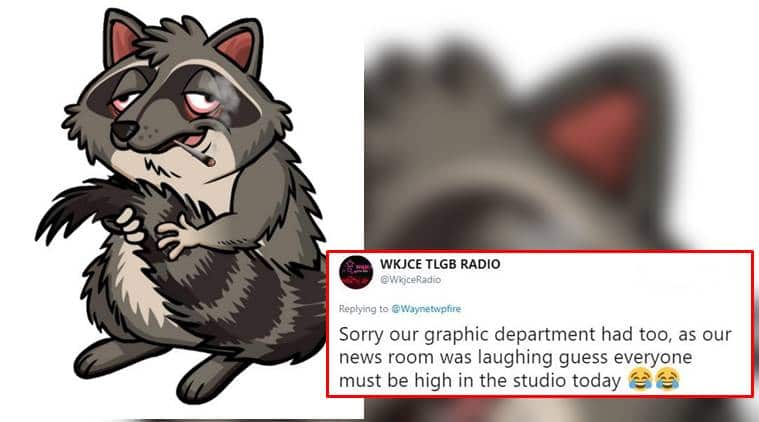 Ever seen a stoned raccoon? This incident will leave you shocked. (Source: Waynetwpfire/Twitter)

If you heard there was a raccoon high on marijuana around, you’d probably think someone was cracking a silly joke. But, when a woman dashed at the door of Wayne Township fire station in Indianapolis, USA, the officers were shocked to see a raccoon, who had smoked excessive marijuana and was completely “stoned”.

ALSO READ | VIDEO: Have you ever seen a ‘smoking’ elephant? This clip will leave you puzzled

The pet owner ran straight for help in the dead of the night to seek treatment for the “sick” creature. While talking to one of the media organisations, captain Mike Pruitt of Wayne Township fire station said that they were “quite worried” to see a woman seeking for help at such wee hours.

“As many times as the doorbell on the firehouse was pushed, the firefighters were quite certain that something bad was going on outside,” Pruitt told WTHR News. Reportedly, the pet raccoon appeared very lethargic and showed symptoms typical of a person exposed to marijuana, the fire captain added.

ALSO READ | VIDEO: SHOCKING! Orangutan smokes a CIGARETTE on camera in a zoo

Although the matter looked quite serious on that night, the fire department later posted the “emergency” situation on Twitter with a hilarious illustration of a raccoon that indeed looked very high.

Story of the day! Our FF’s at Station 82 were awakened at 2 am last week to a person seeking treatment for her pet Raccoon. What was his illness you ask? The raccoon had smoked too much weed. Yes! It happened! As much as we love animals, there wasn’t much they could do. pic.twitter.com/lypHvrBZSJ

Twitterati also shared the good humour, and started posting a string of funny tweets on the micro-blogging site. Check out some reactions here.

How does a racoon even smoke weed

I was wondering as well, I am guessing it ate it 😂😂 pic.twitter.com/x4ko0zEtl4

Later when the raccoon got the munchies… pic.twitter.com/7iRfoxonjm

Are you guys sure he “smoked” it? This raccoon is pretty amazingly skilled!

So many questions on this story but I’ll start with… a pet raccoon!? https://t.co/GwLersQVrQ

What do you think of the entire fiasco? Tell us in the comments below.