VIDEO: Uber Eats deliveryman takes a bite out of customer’s order while no one is watching

A Uber Eats driver was caught on camera stealing the food of a customer. The incident, which took places in Melbourne, has gone viral on social media. 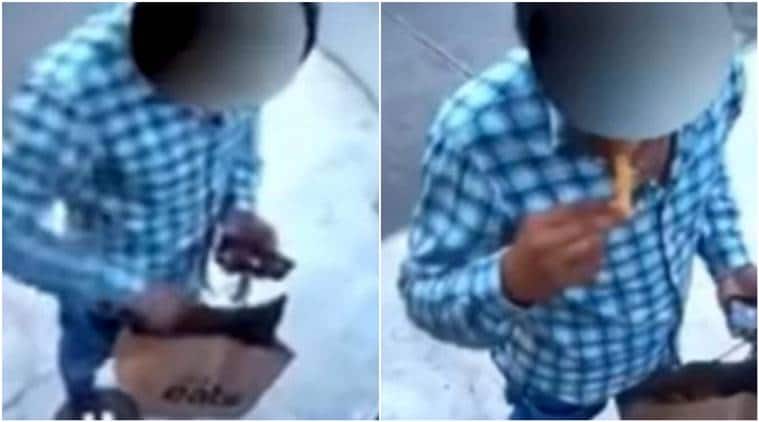 The incident took place in Melbourne. (Source: What Happened Today/YouTube)

A video of a deliveryman in Australia pinching food from a customer’s order has gone viral. In the video, the Uber Eats employee peeps inside the delivery package and goes on to devour what looks like to be some french fries.

The incident was spotted by a friend of radio show host Eddie McGuire, who according to a Daily Mail report, told his listeners that he often felt that his food delivery was light while receiving it. The incident took place in Melbourne. “This has been a bit of a common occurrence at my place where sometimes the Uber [Eats] comes in and you go ‘it’s a bit light’,’ McGuire said during the program explaining the incident.

He further shared how his friend, who was amused by the incident, informed him that the deliveryman’s actions were captured on his home security system. Wil Anderson, his co-host, defended the delivery man saying that the “poor guy” was probably not paid well and “if you can’t get a tip, you’ve gotta get a chip”.  An UberEats spokesperson in a statement to Daily Mail Australia said, “We know how important food safety is, and we ask delivery partners to take great care during the delivery process to ensure the quality of meals they deliver for restaurants reflect the restaurant’s standards.”

“Delivery partners using UberEats are expected to comply with the Uber Eats community guidelines which explain they can lose access to the app for tampering with orders. We encourage users of the app to contact us with any concerns or issues they may be having and we will work to resolve these with them,” the statement read.