The Twitter thread has gone viral with over 59,000 likes. 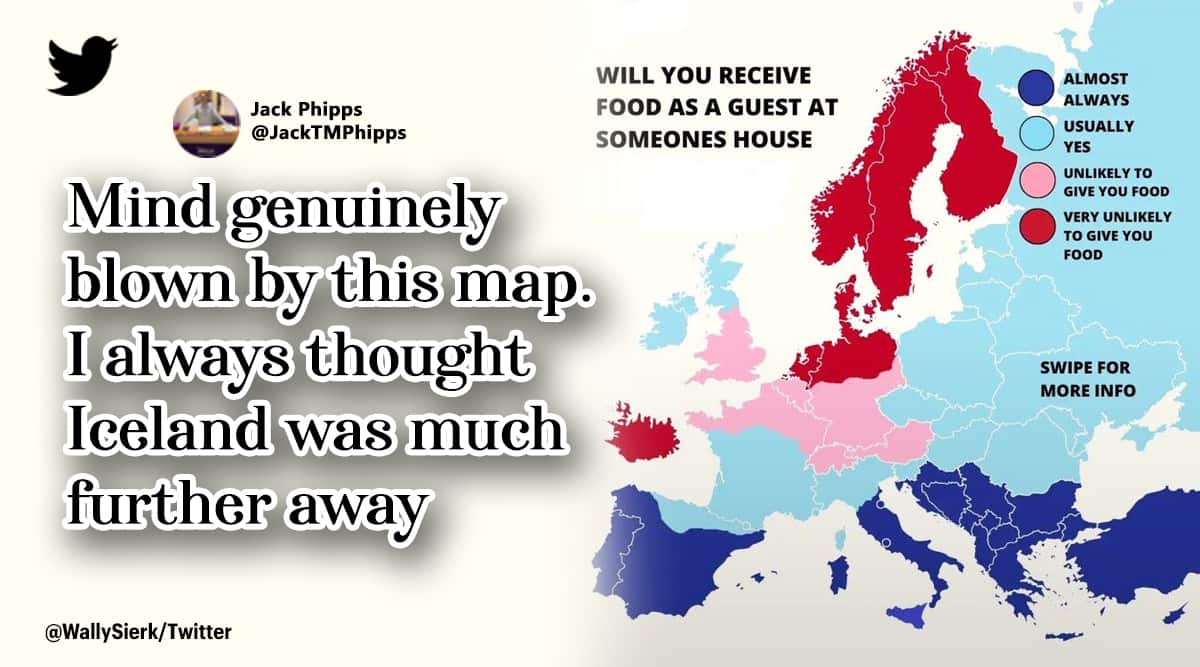 Scandinavian countries like Finland, Sweden, and Norway have a reputation as being unhospitable.

While European countries are highly affluent, some of them have a bad reputation for being inhospitable to guests. The hospitality behaviour and customs of a nation are a result of a complex socio-political history of a region.

On Sunday, a Twitter user tried to explain why some European countries are perceived as cold or unwelcoming through a simplified Twitter thread that soon went viral.

On the unmarked map, Scandinavian countries like Finland, Sweden, and Norway were marked as “Very unlikely to give you food”.

As theorised by the Twitter thread, the Scandinavian countries were less likely to serve good to their guests because historically in these countries the onus of hospitality was put on the wealthy and powerful. The thread argued that “hospitality not only brought honor to the giver, it had the potential to bring shame to the recipient.”

However, soon the feeling of honour (that the affluent section of the society felt) and feeling of shame (that the lower section felt) caused social unrest, especially in the middle ages.

In the early 1800s, the Protestant Church tried to manage this unrest by promoting “the ideal of the free member of society, owing no one and owed nothing.”

The thread further argued that the Protestant church created a society which “minimized the creation of debt and obligation, and maximized the ability of the individual/family to be self-sufficient.  This “not feeding the neighbor kids” weirdness Is about maintaining peace in the community.”

This is blowing people’s minds, so as an amateur historian and sociologist I’m going to try to explain this development/ cultural artifact. pic.twitter.com/vNF0MMpMFK

Tangential, but it remind me of this banger https://t.co/z2h4GTbgOF

In Sweden, some 50 y ago, I think there was a silent understanding between parents that “our kids eat at home”. If you fed your neighbors children you somehow broke the rule and “sabotaged” their dinner plans. Dinner time was a bit sacred. Nowadays, nah.

Nordic/Germanic/Celt ancestry here. My mother, horrified at my neighbor’s attempts to feed me, safety-pinned a note to my clothes saying “please do not feed _______, she gets enough food at home.” Their (weird) assumption was that neighbors were throwing shade.

As someone that grew up in Sweden I’ve never heard this but I’m from northern Sweden so things may be different down south. However we have the culture of FIKA and people always try to push more fika on you, so this doesn’t make any sense to me.

Turns out my completely made up story has a few bits and pieces that are almost close https://t.co/B1XkFMloVP

This thread is amazing example why you sometimes need anthropologist. No numbers, maps or graphs will provide you deep cultural context of certain data. Offering food to guest can depend from VARIOUS factors like general availability of food, cultural background, history etc
🤓🧵 https://t.co/k4Lbo0H4Zg

This thread, soon received over 59,000 likes since it was posted on May 29, 2022. However, many people dismissed the claims it made. A Twitter user wrote, “Imagine doing an extremely long multi-tweet thread explaining the cultural and historical significance of a completely fake Instagram infographic map.”