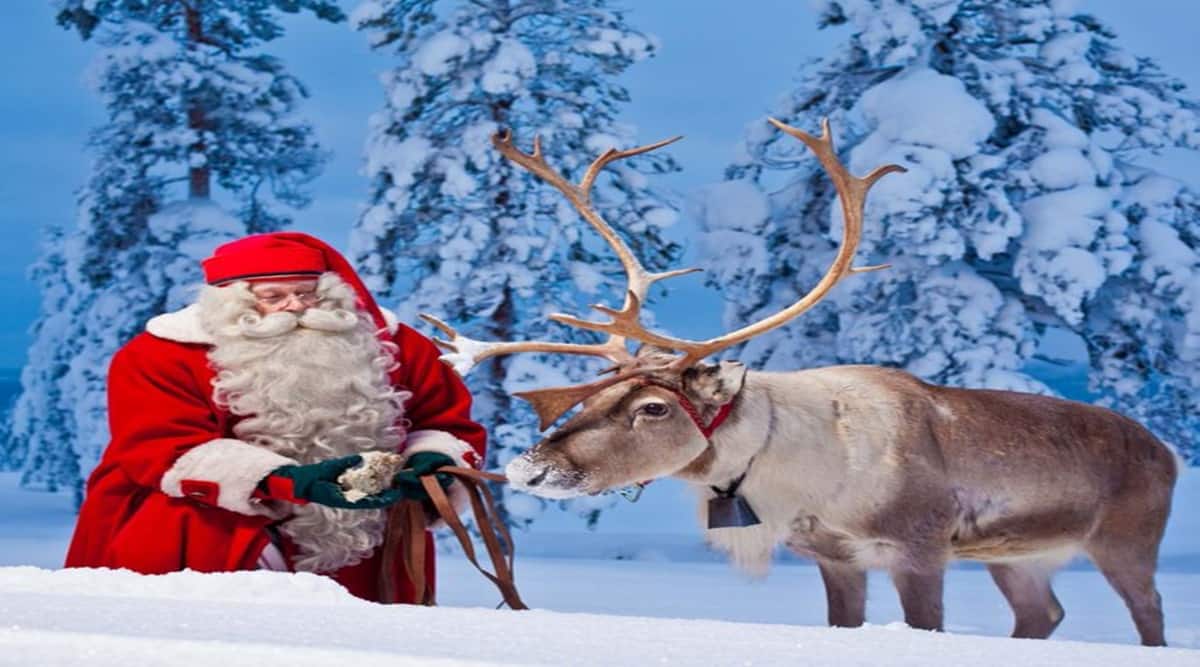 Santa Claus has returned back to his North Pole village after celebrations and merrymaking during Christmas. Thousands of netizens were thrilled to track Santa Claus with the help of North American Aerospace Defense Command. Starting at 4 am on December 24, NORAD website has been putting out updates about Santa’s journey.

According to the updates, traversing the globe on the sleigh pulled by his reindeers, Santa delivered gifts amid the pandemic. He met researchers at McMurdo Station in Antarctica, stopped by the Taj Mahal and was spellbound to see decorations in Mumbai. Santa’s reindeer munched on palm tree leaves as he delivered presents to children in Manila, Philippines.

NORAD also spotted Santa at the tallest building in the world, Burj Khalifa in Dubai. Meanwhile, in Belgium, he enjoyed the view of the Plaisirs d’hiver in Brussels while delivering presents.

See how Santa Claus travelled across different parts of the world:

Santa has been spotted visiting the researchers at McMurdo Station, Antarctica! Scientific research is performed at and near McMurdo in many fields including biology and ecosystems, geology and geophysics, glaciology, geomorphology, ice cores, and ocean and climate systems. pic.twitter.com/HUqTCkuKcG

NORAD is tracking Santa in the skies of Shanghai, China!https://t.co/Jti9jjZTE9 pic.twitter.com/ptwbwrhdmA

#Santa has had a smooth flight so far. His sleigh has just been spotted over the Taj Mahal! #NORADTracksSantahttps://t.co/Sg92KCHsqX pic.twitter.com/kbUWQAoTdV

Santa is flying over India! In Mumbai, street markets transform to celebrate the holidays and sell ornaments, treats, and decorations! #NORADTracksSanta pic.twitter.com/Xjrvi3kmhg

Baba Noel has been flying over Egypt, admiring the Great Pyramid of Giza! #NORADTracksSantahttps://t.co/GshYKwDzx6 pic.twitter.com/zXcnEGMR8K

#Santa is enjoying the view from Venice, Italy. If you are awake in Italy, get to bed right now as Santa is flying over the canals! #NORADTracksSanta pic.twitter.com/8wGEu2iUZI

Santa is flying over the Big Apple! Keep track of where Santa will fly after he leaves New York City, New York on https://t.co/NgHFVneAuihttps://t.co/knoL3mf0MQ pic.twitter.com/qfa3lwm7yh

#Santa is flying over the headquarters of North American Aerospace Defense Command in Peterson Space Force Base, Colorado. Did you know NORAD has been tracking Santa for 66 years?https://t.co/fVNNmYTAuu pic.twitter.com/wMtW9BCzgI

Aloha Santa! NORAD detects he is flying over Honolulu, Hawaii and will be returning to the North Pole very soon. #NORADTracksSanta pic.twitter.com/4cFJbhLQti

Faster than starlight, #Santa is done! Thank you for being a part of the 66th year of our holiday tradition. #HappyHolidays from #NORADTracksSanta! pic.twitter.com/aMEqyG0cPX

The North American Aerospace Defense Command’s tryst with Santa’s journey around the globe began 66 years ago, as per a press release.

In an intriguing anecdote, it was a misprinted contact number of US Air Force Colonel Harry Shoup that led to the creation of the hyperreality. A local newspaper had published an advertisement informing children that they could call Santa directly. The phone rang several times at the Continental Air Defense Command Operations Center. Col Shoup who realized it was a mistake, assured children that he was the Santa Claus. A duty officer was later assigned to answer calls. NORAD carried on the tradition since 1958.

@IAF_MCC Isn’t it prohibited to fly over the Taj?
I was expecting our Tejas providing the guest from the Poles.
Merry Christmas!@sneheshphilip https://t.co/4TOtnBCX88

This 63 year old is a big kid at heart as I joyfully track Santa every year! Thank you!❤🎅