Russian roads are extremely dangerous, with an estimated 30,000 traffic-related deaths per year. 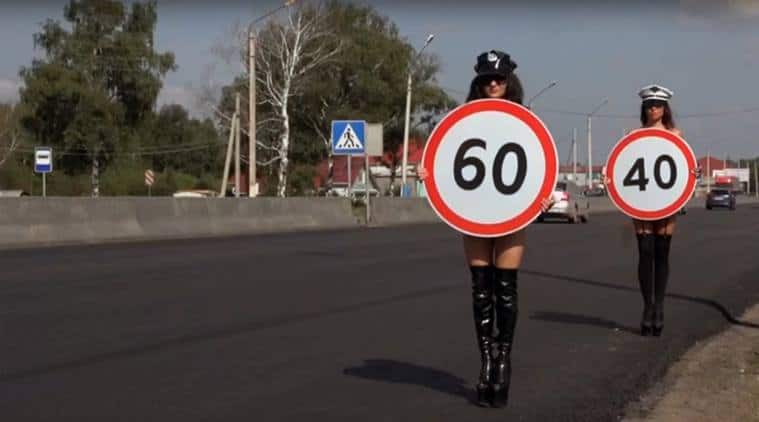 The topless women held signs warning of 60 and 40 kilometres per hour and paraded along a pedestrian crossing. (Source: YouTube)

Russia is known for its very high number of traffic accidents every year. In 2013, the country came up with a weird idea to slow down speeding vehicles. As part of an experiment, two topless women were stationed at a pedestrian crossing as a trial of the road safety campaign in Severny village. The topless women held signs warning of 60 and 40 kilometres per hour speed limit.

The scantly clad women — dressed in thigh-high boots and pants – paraded around an accident spot carrying speed limit signs. Surprisingly there were no reports of accidents caused by the distraction of the drivers. The Mirror reported, “Despite it’s slightly controversial approach it has also won backing from elderly pedestrians, who were terrified to cross the road before.”

The experiment was started in 2013 but the idea and videos of them parading with signage resurfaced as many Russians have been urging the government to come up with an effective solutions to resolve the nation’s traffic problems. The record number of accidents have led to the country’s inclusion on the World Health Organisation’s list of the most dangerous countries for drivers.

Road safety campaign Avtodrizhenia staged the trial and said that “most speeding drivers, the majority of whom happened to be men, slowed down to admire the female road safety assistants,” according to a report.

As we know Russia practices ban on nudity, one only pays a small fine as punishment. But authorities in the village turned a blind eye to two topless women back in 2013. Russia is arguably one of the conservative countries in the world where even lace panties are illegal.