Reddit user shares how his wife pretended to be him and completed his work while he was sick, netizens divided 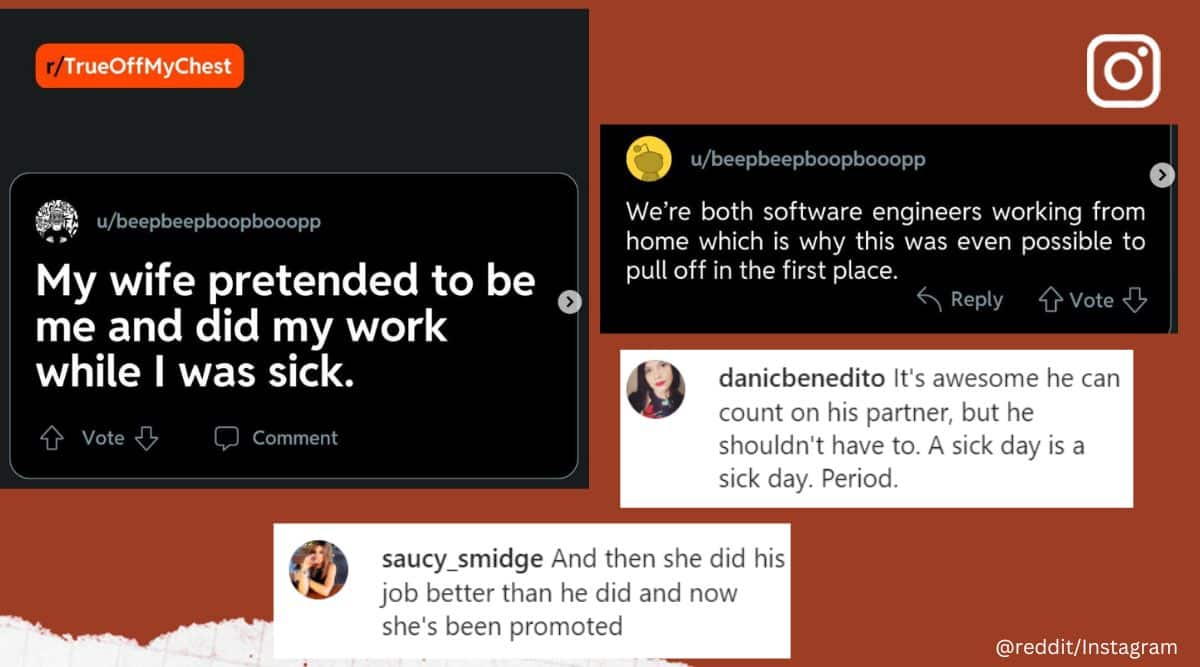 The Reddit user shared that he and his wife are both software engineers who work from home.
Listen to this article
Reddit user shares how his wife pretended to be him and completed his work while he was sick, netizens divided
x
00:00
1x 1.5x 1.8x

Working from home has become a norm in many workplaces ever since the pandemic. While it has its advantages, there are many downsides to it, one of them being that bosses expect their employees to meet deadlines even if they fall sick. A Reddit user recalled how his wife pretended to be him and completed his work when he was down with a nasty cold. This seemingly sweet gesture on his wife’s part is getting a mixed reaction from netizens.

The Reddit user shared that he and his wife are both software engineers who work from home. While he is a full-stack developer, his wife is a front-end developer, but she pretty much has all the knowledge she needs to do the same work that her husband does. His wife would sometimes sit with him while he would work and help him debug lines and lines of code.

In a viral Reddit post, the man explains that he caught a nasty cold last night but couldn’t take an off as his team was under a lot of pressure from their boss to complete a project. In this situation, his wife advised him to focus on getting better and assured him that she would “handle the rest”. After finishing her work in the morning, she locked herself in his office to do his work.

She logged in to her husband’s remote work and made an excuse in their team group chat about not being available on a voice call because of a bad throat. The man’s colleagues fell for this excuse. Throughout the day, she completed her husband’s work while he lounged on the sofa with a wet cloth on his forehead.

The official Instagram page of Reddit shared this post on Tuesday and it has received more than 19,000 likes. This post prompted a discussion about toxic work culture that does not support the workers even when they are sick.

“Sad state of affairs where you cannot take a sick day for a project that may be outdated in 12 months. Worse part, we’re conditioned to believe this was a great alternative,” commented a user. “And that’s why we need strong labour laws kids. So we don’t romanticise the fact that ppl don’t even have the right to get sick without overloading others (wife or the team),” another person shared. “And then she did his job better than he did and now she’s been promoted,” said another netizen.