Rita Moreno's decision to re-wear the dress she wore to the 1962 Oscars, when she won an award for Best Supporting Actress has endeared her to many. Ever since the news broke, social media has been flooded with excited fans sharing old and recent photos of the actress. 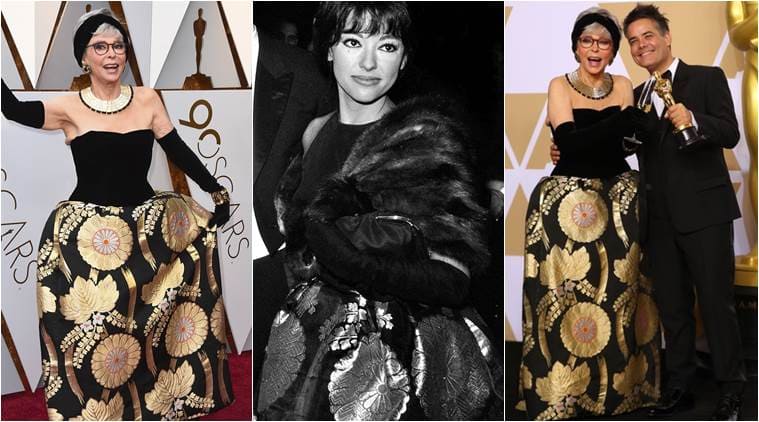 Rita Moreno’s dress from the 1962 Oscars was apparently made in the Philippines. (Source: AP, Twitter)

There have been tonnes written on the elaborate process that goes into selecting that perfect dress for Oscars night, but here we have the legendary Rita Moreno who simply wore the dress she had previously worn back in 1962, which was the year she won the Best Supporting Actress for her role as Anita Palacio in West Side Story. C’est simple!

This nostalgic selection has certainly endeared her to many, who immediately took to social media to share photos of the actress wearing the same gown from 1962. “I would think it would tarnish! I had no idea I was going to win, I was sure it was going to be Judy Garland for Judgment at Nuremberg. I flew in from Manila in the Philippines just in case, which is where this gown was made,” the 86-year-old actress, singer and dancer told E! host Ryan Seacrest ahead of the Oscars show. (See | Oscars 2018 Red Carpet: Who wore what?)

Moreno is apparently only one of 12 people in history to have won an Emmy, Grammy, Oscar and Tony awards. The actress slightly modified the number to make it more contemporary. She changed the neckline to a strapless version and accessorised the ensemble with a heavy gold necklace, long gloves and a chunky gold bracelet. (Also see | Oscars 2018 Fashion: Salma Hayek And Viola Davis Lead The Worst Dressed Brigade)

The story behind the outfit made it an endearing choice for the occasion. Once the story was broken on Twitter, Moreno herself tweeted out a confirmation.

Just learned from Rita Moreno’s daughter that her mom will be wearing the same gown she wore to the #Oscars in 1962 pic.twitter.com/Sf6DdgC7jr

Yes, It’s true! See you all on the #RedCarpet soon! https://t.co/ijUJa9ZJVA

Of course, fans on social media were quite stoked about this, and shared their excitement online.

Rita Moreno arriving at the #Oscars in the same gown she wore when she won in 1962. Your faves could NEVER. pic.twitter.com/26XZG8FfO5

Rita Moreno wearing slaying the #Oscars in the same gown.

Other than her amazing talent and inimitable spirit, what made Moreno’s 1962 win historic was that she was the first Latin American actress to win an Academy Award.