From premature funerals to managers knocked out with chloroform, inaugural FIFA World Cup was madness

A Twitter thread describes crazy moments that went down at the inaugural FIFA World Cup in 1930 in Uruguay that was won by the host nation by beating Argentina in the final. 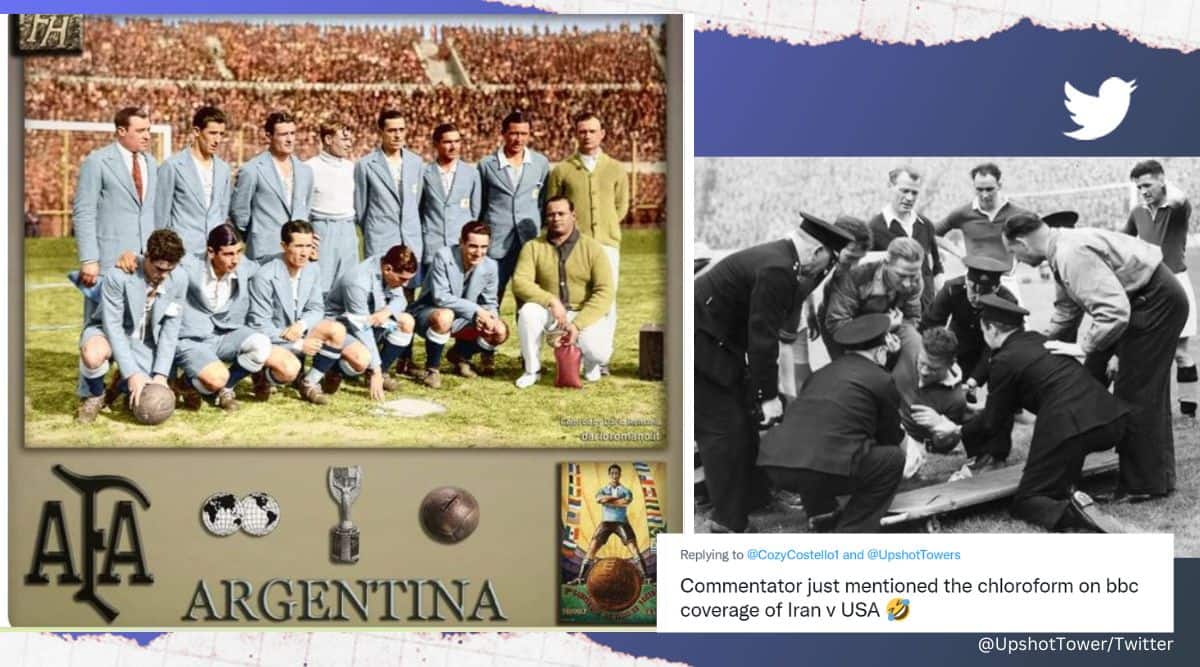 A Twitter thread describes crazy moments that went down at the inaugural FIFA World Cup in 1930 in Uruguay.

The FIFA World Cup is one of the most-watched and followed sporting events with billions of fans following the progress of their national teams. Even countries that have not qualified for the showpiece event, like India, have millions of viewers, proving how popular the game is globally.

However, there was a time when footballers were not multi-millionaires who travelled by private jets. In a Twitter thread, The Upshot explained some crazy stories from the first-ever FIFA World Cup that was held in 1930 in Uruguay and was won by the host nation by beating Argentina 4-2 in the final.

Those days, the World Cup was a far cry from what we are familiar with today as the referees wore suits and the Bolivians played in berets. The Romanian team was selected by the King. King Carol II picked the squad that would spend two months playing and travelling to and from the inaugural tournament in Uruguay. But that is tame in comparison to other wild things that went down at the tournament such as premature funerals to managers being knocked out with chloroform.

The 1930 World Cup was absolutely mental.

The refs wore suits, the Bolivians played in berets, and the Romanian team was selected by the King… and that’s the tame stuff.

From premature funerals to managers knocked out with chloroform, here’s a short history of the madness… pic.twitter.com/ncarl6SQAC

“The tournament was hosted by Uruguay, and the European sides sailed together across the Atlantic aboard a Scottish steamship. They trained on the top deck, and stopped off in Rio to pick up the Brazilians. Jules Rimet himself travelled with them, with the trophy in his suitcase,” said a tweet.

Jules Rimet was a French football administrator who was the third and longest-serving president of FIFA, serving from 1921 to 1954. It was on Rimet’s initiative that the first FIFA World Cup was held and the trophy was named in his honour.

Egypt was the only African country supposed to participate in the tournament but they set off late and missed the boat. They telegraphed their apologies, leaving the tournament with an awkward 13 teams. Japan and Siam were the other teams that pulled out.

“When the football kicked off, Argentina quickly established themselves as the badboys. Police had to intervene after a violent scrap in their game against Chile, but it was their 6-1 semi final win over the USA where things really got ugly.

“A first half horror tackle left one of their opponents with a broken leg, and the game descended into a mass brawl. An Argentine player knocked four teeth out of an American’s mouth, and another ended up in hospital with injuries to his stomach,” further tweets said.

And in possibly the most comedic and slapstick moment in World Cup history, the American manager rushed onto the field to confront the referee, tripped and smashed a bottle of chloroform in his pocket. The fumes knocked him unconscious and he had to be stretchered off.

“The final saw hosts Uruguay take on their hated neighbours Argentina, and more than 15,000 Argentine fans headed to Montevideo on board a steamship. But the ship got lost in heavy fog, and they arrived a day late to the news their team had lost, kicking off riots,” another tweet said.

And the most ridiculous part, when travelling home to Romania, midfielder Alfred Eisenbeisser Feraru fell ill, and was taken off to hospital when the boat stopped in Genoa in Italy.

“The team continued their journey, but when they arrived back in Bucharest without him, a rumour spread that he had died. Even his distraught mother was convinced, and she made funeral arrangements, only for Feraru to walk through the door on the day on the day of the wake. She fainted on the spot,” the Twitter thread said.

The Twitter thread with iconic photographs from the inaugural FIFA World Cup has received more than 70,000 likes since being shared Tuesday.

“Héctor “El manco” Castro, who scored Uruguay’s first goal in the tournament and also scored in the final, had one arm. He accidentally amputated the other one with an electric saw at the age of 13,” commented a user.

Mired in crisis, World Cup run was always a dream for Iran