When an intense thunderstorm hit New York, a Twitter user captured the moment when a massive lightning bolt struck the iconic monument. 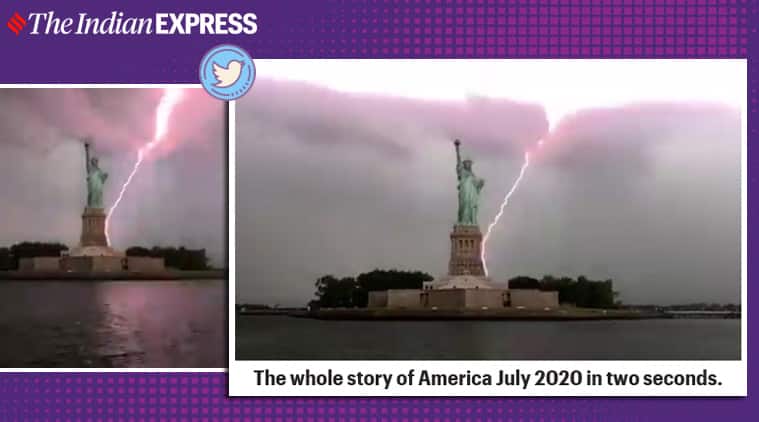 Many thought that the lightning striking the Statue of Liberty is pretty symbolic given the ongoing political upheavals in the US. (Source: @_Mikey_Cee/ Twitter)

A severe thunderstorm Wednesday brought heavy rain, flashes of lightning, and thunder to the tri-state region of New York City, Newark and Jersey City. A video taken during the thunderstorm showed the moment lightning struck the Statue of Liberty and the stunning footage is now being widely shared online. Many on social media have dubbed it a ‘sign from God’ due to the current political scenario in the country.

Twitter user Mikey Cee captured the moment when massive lightning bolt struck the iconic monument. The video was taken from a dock on Ellis Island, and had over a million views in a few hours. It was also widely shared by other handles.

The best video I ever captured. #NewYork #WeatherChannel #NYC pic.twitter.com/cOBqTqJ9LO

The clip reminded many about the 1984 film Ghostbusters and some even joked that the lightning should have “hit the White House”. Many pointed out a similar event was seen recently in the national capital.

If you don’t believe in signs from God then you aren’t paying attention. Pay attention 👇 https://t.co/Id9ihmP0QI

I’m not saying this is Ghostbusters 2. But I’m not *not* saying it. https://t.co/Pfuw9mqXOZ

at this point a UFO could strike the statue of liberty and i wouldn’t be surprised. https://t.co/uugY9AwGIH

Any other year this is cool. In 2020 it just comes off as particularly ominous.

Update – statue appears to have animated and is walking toward Trump Tower.

The whole story of America July 2020
in two seconds.

It is My warning to a country using chemical weapons on its own citizens. https://t.co/81YIDgcIoj

My 9 year old just said “Perhaps it’s trying to tell us what America has become.”
😳

It’s pretty easy to figure out who is responsible for this high voltage attack on lady liberty… pic.twitter.com/0nEiobMKpn

In New Jersey, storms flooded streets and obscured the skyline with torrential rain in weather conditions similar to tropical storms, and more rain and severe storm are expected on Thursday as well. According to CBS New York, two people were struck by lightning in the South Ozone Park in Queens. In the same area, lightning also struck a church steeple and sparked a fire, but there were no injuries.