Dorothy Kwan said that her 10-year-old daughter Lily was out walking their dog, Macy, when a coyote began chasing them both down the street. The six-year-old Yorkshire Terrier has become a local hero after saving the girl.

Dogs are known as man’s best friend because they always try to protect their loved ones. Recently, a little Yorkie stood up to a coyote in Canada, risking its own life to protect her owner, 10-year-old Lily Kwan. The dog is now being hailed as a hero by everyone on social media.

Things went awry when Kwan who was out with her dog for a morning walk encountered the coyote at Scarborough in Toronto. The horrifying moment of the scared little girl running away and the small dog Macy trying to distract the animal was caught on a neighbour’s CCTV camera. Screaming helplessly while being chased, the girl was seen running into the neighbour’s house to seek help, while the dog was still seen fighting even after being badly injured by the coyote.

Although a Yorkshire Terrier, a breed that generally weighs 5 to 7 pounds, Macy took on the wild animal which was several times its size, CTV News reported.

Talking to CTV News later, the girl said she had seen some online posts warning people in the neighbourhood about coyotes attacking little children and pets. Scared when she encountered the animal for the first time, her basic instinct was to run away. “I ran to the sidewalk and started screaming for help. No one heard me,” she said, adding that she dropped her dog’s leash in the process.

The scary surveillance footage showed the fierce fight between the two animals, and at one point, the coyote had the pet dog in its mouth. Eventually a neighbour came out and chased the coyote away. But by then the dog was badly injured, bleeding from several wounds.

Dorothy Kwan, Lily’s mother, had already left for work when the incident happened. When she got the call from her daughter about vicious attack, she “dropped everything and drove home”. She told 680 NEWS that seeing the dog in the poor state, she frantically called her vet, but they were closed. She then called the emergency animal hospital, which took them in right away.

“Macy had a puncture wound on her back. She was covered in blood on her face. She had a very bad leg wound,” Kwan said about Macy’s injuries, for which surgery was needed. 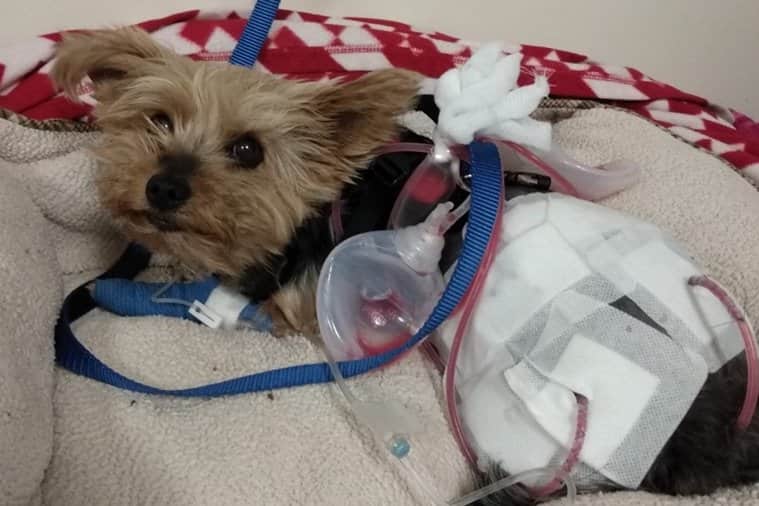 The dog got about 10 puncture wounds and had to undergo a surgery. (Dorothy Lily/ GoFundMe)

Although Macy came out of the surgery in a stable condition, the dog had to be transferred to the Intensive Care Unit (ICU). With the costs of treatment estimated to be between $4,000 and $6,000, the family set up a GoFundMe page to raise some money. After the video of the dog’s heroics went viral, support started pouring in and although the initial goal was to raise $10,000, the page currently has brought in donation above $26,000.

The dog was finally discharged on Friday, according to a update on the fundraiser page. “Macy is finally settling in at home. She is so excited to be reunited with our family again,” Kwan said.

Dorothy shared pictures of her pet and daughter reunited again. 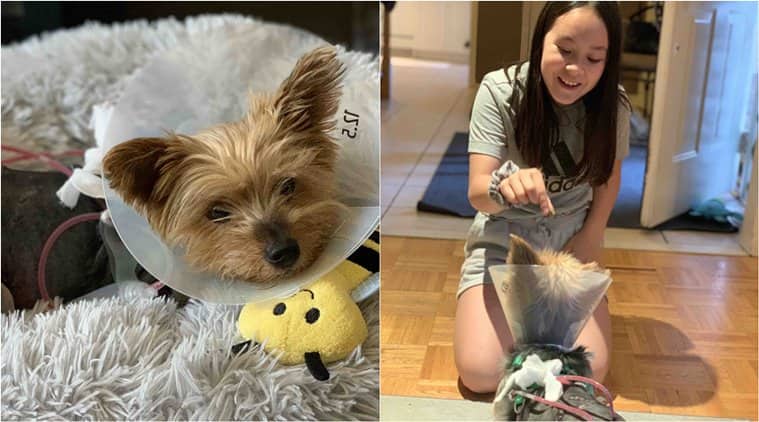 After spending a few days at the hospital, the dog has returned home but is still recovering. (Dorothy Lily/ GoFundMe)

Thanking everyone for their support and prayers, the woman added: “We are truly blessed that your thoughts and prayers are with Macy throughout her recovery journey. It will be a long one”.

According to Toronto Sun, she has spoken to a dozen agencies — wildlife people, animal control, city of Toronto, the police, the Ministry of Natural Resources — and there’s nothing anyone can or will do about this particular coyote. Kwan said she is aware that animals will leave if they can’t find food, but someone is feeding wildlife in her area, possibly unwittingly.

She has also said that the recent coyote attacks in the area have left people very scared.