This photo of a ‘chudail in Hyderabad’ has gone viral in Pakistan, but what is it really? 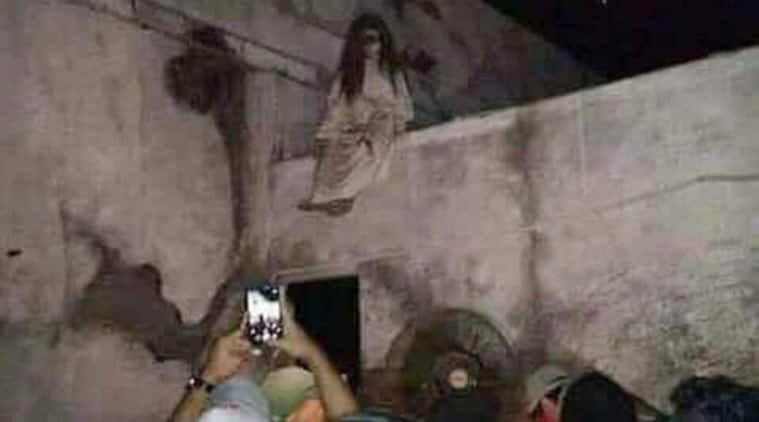 This photo of a ‘chudail’ spotted apparently in Hyderabad, Pakistan, is going viral, but for hilarious reasons! (Source: Faakhir Mehmood/Facebook)

We have all watched enough Bollywood movies in our lives to know that on our way to some place at night, if we come across a strange looking woman or a child, dressed in white, looking at your with piercing eyes, we should run in the opposite direction clutching our life. Yes, the ‘churail’ or banshee or witch (call it what you will) has been made immortal in movies for sure, but what would you do if you come across one in real life? Would you run away or would you cast aspersions on its true origins on social media, with pictures and all?

Well, it seems Faakhir Mehmood, a popular Pakistani singer, put up a photo of a ‘churail’ who was apparently spotted in Pakistan’s Hyderabad on Facebook with the caption “Can someone verify? The supposed picture of CHURAIL captured by many people in the middle of the night in Hyderabad.”

Result? Hilarious replies by people who were anything but afraid!

This is the photo.

ALSO READ | This cute couple selfie is actually freaking everyone out, can you figure out why?

So much was the disregard for the ‘supernatural being’ that somebody even rightly pointed out — “pehli churail dekhi hai jis sey log bilkul b nahi dar rahy… ??????” (For the first time, seeing a banshee nobody is afraid of.) Another pointed out that it is probably not a witch, but “one of those papa’s princesses on facebook with no makeup”. Well, the hilarious responses did not stop at that!

Sample some of the reactions here.

Others took it as a chance to dutifully tag their friends, comparing them to the now infamous ‘churail of Hyderabad.’