The alligator was filmed biting the female handler's arm before one of the guests jumped into the enclosure to help her escape. 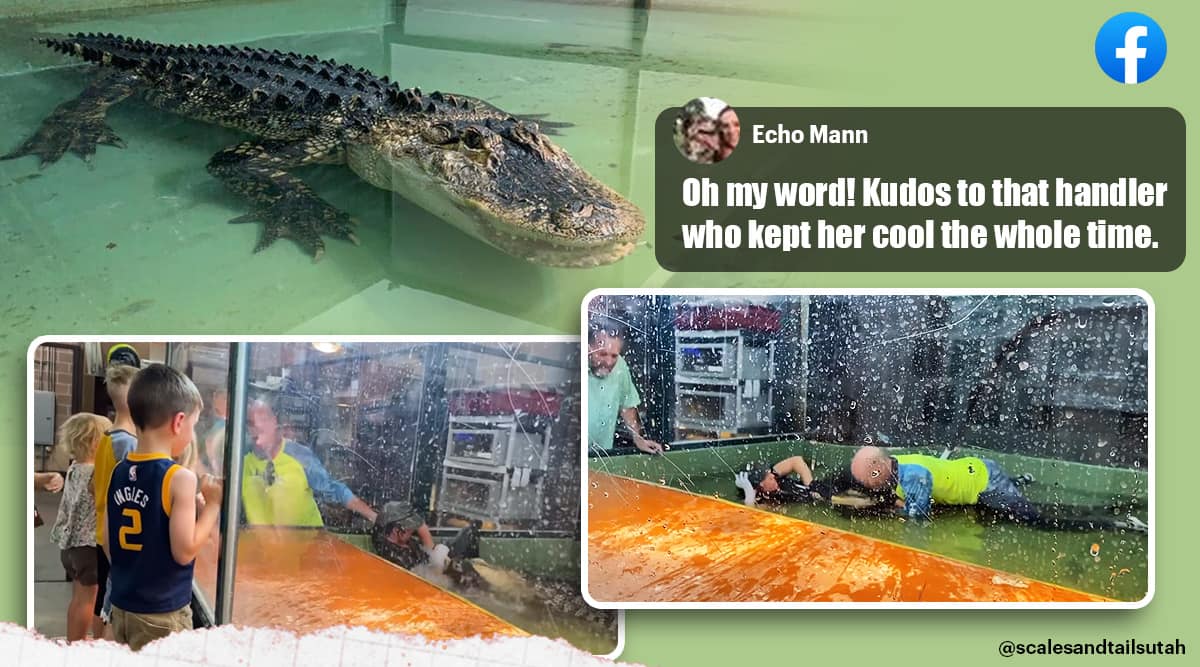 The alligator attacked the handler while she was giving a demonstration to guest of a children birthday party.

A birthday party at a Utah reptile park turned into a horrible experience for the children, when an alligator bit the handler’s hand and dragged her into its enclosure. However, thanks to a brave man, the handler’s hand was freed from the jaws of the reptile. The shocking video was caught on camera and is now going viral.

Trainer, Lindsay Bull, at Scales & Tails Utah, in suburban Salt Lake City, was seen talking to some adults and children about the alligator while standing very close to it enclosure. Suddenly, the alligator yanked forward and pulled her by the arm. As she tried to free herself from its jaws, the video showed the animal rolling violently, as the woman struggled. The footage showed children watching the close encounter before being ushered away by another guest.

However, a bystander identified as Donnie Wiseman was quick to react. After screaming to alert other staff, he quickly jumped into the water, climbing on the top of the reptile, to keep it in control. The video showed the handler remaining remarkably calm, advising the man out there to help her, preventing her arm from being torn off by the animal.

After grappling for nearly two minutes, the reptile let loose its jaws and the woman’s hand was freed. Two other men standing outside the pool, were seen quickly pulling out Bull from the water enclosure, while Wiseman continued to pin down the agitated reptile.

[Disclaimer: The video may be too intense for some viewers. Viewer discretion is advised]

“We didn’t expect this kind of thing when we set out for a birthday party today!” wrote Theresa Wiseman, wife of the man who wrestled with the alligator, coincidentally caught the incident on camera. “I have the most awesome, brave husband ever!” she added saying: “I’m glad you’re okay!!”

The reptile park too addressed the situation on its Facebook page and said, “Working with some of these animals has inherent risks that we as the staff accept.” They added that the injured staff member is doing well and is in recovery.

Thanking the men for their “heroism”, the petting zoo added: “These gentleman could have stayed in the safety zone as most of us would, but instead jumped into the situation, of their own volition, and helped secure the alligator. Their help, combined with the training of our staff member, probably saved her life and her limbs.”

Luckily, another bystander had experience in nursing and tended to the handler’s wounds before paramedics arrived at the scene.

Shane Richins, the company’s owner, said that the handler was opening the enclosure to feed the alligator as usual, but the reptile “got a little extra spunky,” Sky News reported.

Richins said the centre normally has a strict policy for a second handler to be nearby when employees are working with the alligators but that hasn’t been enforced in recent years if the worker isn’t planning to enter the enclosure.

The petting zoo posted another update about Bull saying the doctors have come up with a solution to not only save her hand but can also ensure its full functioning ability. Quoting the handler, they added that the she is currently being treated aggressively with antibiotics to prevent any sort of infection.

“I definitely want to thank everyone that has reached out and for doing so, as well; it’s made recovery feel so much more manageable!” she was quoted.

Once a gangster, hospital worker sings to patients, finds fame as TikTok star