Although the child was seen with an olive python which is non-venomous and harmless to humans, many were not happy with the video saying it might prompt the child to grab any snake he spots next time. 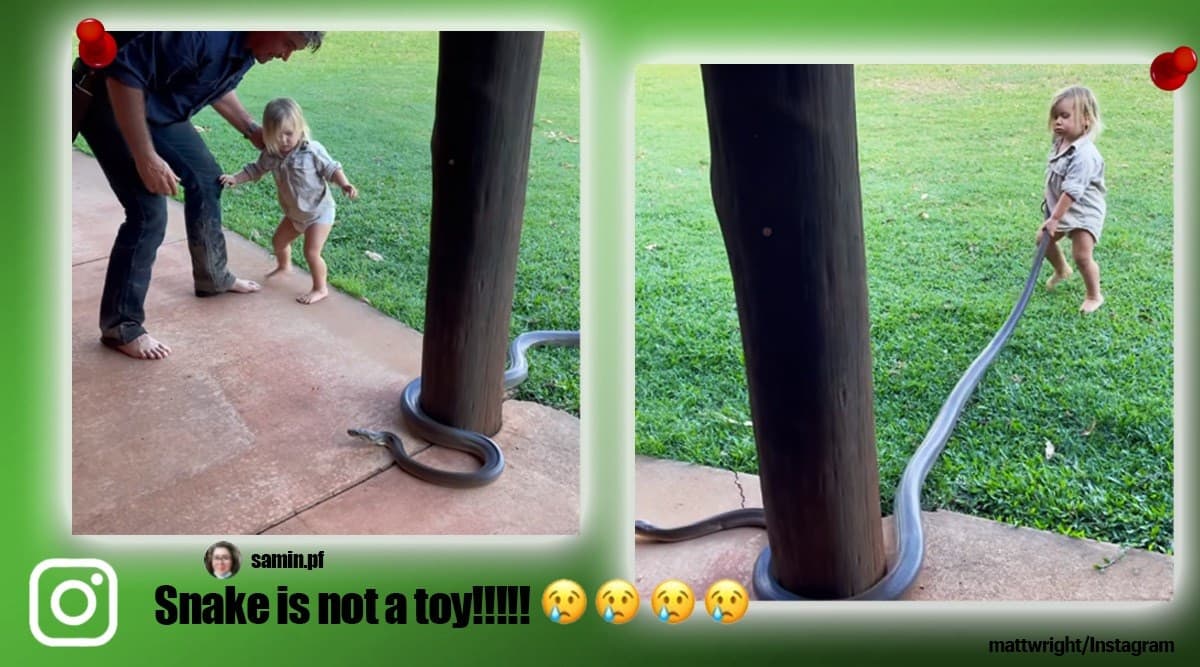 Little Bonjo was seen dragging a massive olive python by its tail in a viral video.

Children and snakes are probably something no parents would want to see together. However, in an scary video going viral a toddler is seen trying to move a big reptile by its tail as father encourages him! While most remained stunned, not everyone was impressed.

Australia’s Monster Croc Wrangler Matt Wright recently shared a video of his two-year-old son Bonjo casually pulling a giant python out of his garden by yanking on its tail. The hair-raising footage shared on Instagram has now become the centre of a huge debate online.

In the video, the fearless toddler is seen confidently grabbing the two-metre olive python’s tail with both hands and begins pulling it onto the grass. At one point, the massive snake, which is several times the boy’s size, tries to wrap itself around a wooden pillar, prompting Wright to urge Banjo to “pull him out.”

The “award-winning tourism operator” and host of National Geographic Outback Wrangler instructs the child to return to the reptile’s tail while avoiding the serpent’s teeth. “Quick, grab him, he’s going to bite Dad,” Wright shouts after his son scrambles to the back end.

Although olive pythons are non-venomous and harmless to humans, many were not happy with the video saying it might prompt the child to grab any snake he spots next time.

A post shared by Kaia Wright | MY NORTHERN LIFE (@kaiawright1)

The video of the little boy quickly garnered a lot of attention on Instagram and elsewhere, leaving netizens divided. While many parents raised concerns saying a child that young might not be able to differentiate between a venomous and non-venomous reptile, many defended Wright. Others accused him of jeopardising his son’s safety for 15 minutes of fame on the internet.

People, mostly from Australia, argued that living in close proximity with wildlife is very normal in the island continent and it is good to teach children from a very young age how to deal with such animals. Others argued that Wright and his wife knows what’s best for their son and wouldn’t put him in danger.

The Wright family is known for their regular adventures across the Northern Territory, using their helicopter to explore untouched parts of Australia where Matt often wrestles with massive crocs and helps with their relocation.