TIME and New Yorker's latest magazine covers that have aimed to represent the situation in the US in the best way they could, has now united people across the world on social media as they call out Trump's 'zero tolerance policy' 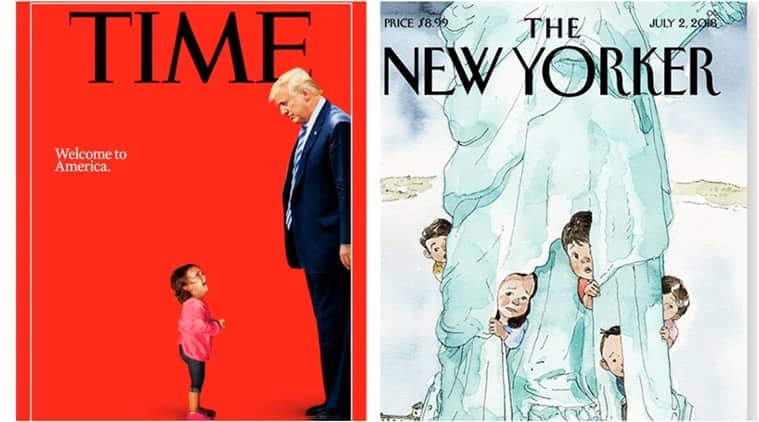 On social media, where heart-wrenching pictures of little children crying after being separated from their loved ones went viral. (Source: Instagram)

Donald Trump’s now reversed zero-tolerance policy, which separated children from their parents who had illegally crossed into US, led to a massive backlash both offline and on social media. Over the last few weeks, pictures  of children crying after being separated from their family went viral, triggered severe criticism of the Trump administration. Though the decision has been reversed, the anger towards the ‘inhumane’ order by the United States government, was palpable. TIME and New Yorker‘s latest magazine covers have now captured the trauma the children went through at the detention camps. The covers have now united people across the world on social media as they call out Trump’s ‘zero tolerance policy’, which many Holocaust survivors, reportedly said, reminded them of what they had been through.

TIME, which has never minced words when it comes to calling out Donald Trump’s policies, showed the 2-year-old Honduran refugee child, whose photos by Getty Images photographer John Moore went viral, looking up and crying while a towering Trump looked down at her. New Yorker showed little children, with fear in their eyes, peeking from behind the Statue of Liberty.

Trump towers over a child weeping for her mother. Rumor is that Trump doesn’t think this image helps his brand. Really? Turns out child abuse isn’t so popular after all. Res ipsa loquitur. https://t.co/AsXfyRPqV9

No longer the shining beacon of hope calling out to huddled masses.

Since the arrival of trump, it is now a steaming pile of dung where your kids will be snatched, and no mechanism in place to reclaim them. #ThursdayThoughts https://t.co/Yvg1QGBEQS

Cover of Time. Trump will probably be psyched he is on it, especially looking so trim. pic.twitter.com/QLNotTYSDN

Welcome to America. We kidnap your kids. What a brutally honest and shocking Time Magazine cover. pic.twitter.com/QJvOFUsxDI

Meanwhile, another news that got many people questioning TIME’s tenacity when it comes to fact-checking, is that the child featured on their cover, was in fact not separated from her mother. The father of the child reportedly said that his wife was seeking a job and not escaping violence or getting deported.

YOU’RE TELLING ME THAT THE CRYING GIRL ON THE COVER OF TIME MAGAZINE WAS NEVER ACTUALLY SEPARATED FROM HER MOTHER?

DID YOU EVEN BOTHER TO CHECK BEFORE YOU PUT THE IMAGE UP ON THE COVER WITH WELCOME TO AMERICA? YOU’RE JUST GIVING TRUMP MORE AMMO ABOUT THE ‘FAKE NEWS MEDIA!’ pic.twitter.com/gzYFxWLbMj

Here is a look at New Yorker’s next week’s cover “Yearning to Breathe Free” by Barry Blitt.

Thank you, New Yorker. Sincerely, a subscriber from Switzerland (Europe, where Americans (not Trump) still have allies).

This cannot be the America of 2018. Babies are now the prop for a wall that he told his supporters that Mexico will pay for. He tried to use DACA but that got him $2 billion, now courts have decided DACA kids stay. He thinks hurting babies will break our hearts. He was right.

Absolutely beautiful cover, Emma Lazarus would be so proud to have her words there beneath to gird them through this horribly surreal episode in American history

Following heavy backlash and criticism for his act, Trump signed an executive order on Wednesday (June 20) ending the process of separating children from their elders.