‘Disgusting’: Tweeple hit out at Railways after dead lizard was found in veg biryani on Poorva Express

After a woman tweeted out a picture of a lizard in a vegetable biryani packet, the Railway Ministry stepped in and helped the passenger with medical assistance. Further, in a tweet, the Union minister Suresh Prabhu said the catering contract of Poorva Express had been terminated. 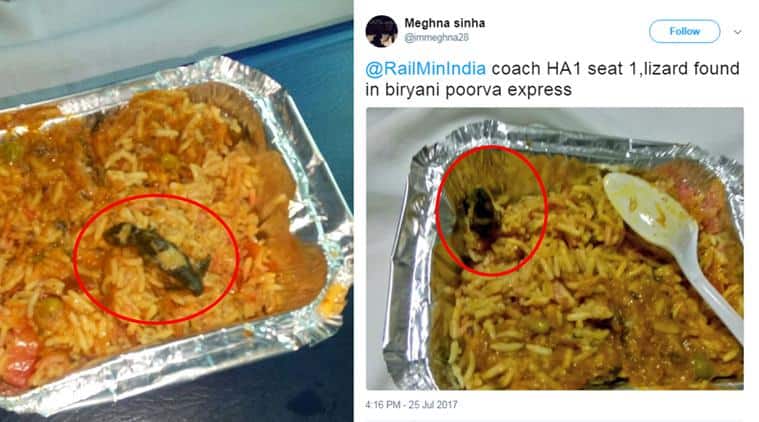 The passenger did not notice the lizard and consumed the food and later was feeling unwell. (Source: ANI news/ Twitter)

Last month there were series of reports on the unhygienic conditions in which food is prepared on Indian Railways. But left with no other alternative, thousands of passengers order the not-so-tasty food anyway. Well, you may not want to debate about the quantity, price or taste after reading this, and avoid the whole deal altogether.

On July 25, a passenger ordered a vegetarian biryani on a train and found a dead lizard inside!

The nightmarish situation happened on Poorva Express on Tuesday. Sadly, the passenger did not notice the lizard and ate the food, causing the person to feel unwell. A co-passenger Meghna Sinha‏ from the train tweeted out a photo tagging Indian Railways. In a separate tweet, she even tried to draw the attention of Union railways minister Suresh Prabhu and shared the disgusting photo.

The Railway Minister’s Twitter handle responded to the complaint soon and asked the passenger to share the PNR and other details. “Kindly share your PNR number and the same is being escalated to the concerned official @IRCATERING,” they wrote tagging the concerned catering department.

The incident happened in the Delhi-bound train from Howrah, days after a CAG report concluded that the quality of food served on Indian trains was “unfit for human consumption”.

The co-passenger also said that the pantry manager was of a great help and took cognisance of the matter. “The pantry manager Deepak Singh was very cooperative and the matter is solved now, thank you for quick redressal,” Sinha‏ added.

The pantry manager Deepak singh was very cooperative and the matter is solved now,thank you for quick redressal.

Fortunately, help reached on time and the ailing passenger received treatment on time. According to news agency ANI, a check-up was done in Danapur Division, where he was given medicines. Kishor Kumar, DRM Danapur Division assured that action will be taken after an investigation.

Chandauli (UP): Lizard found in food served to a passenger on-board Poorva Express; passenger had complained to Railway Minister on Twitter pic.twitter.com/J7jv4s25j7

Ordered food in Mokama&found this. Complained to TTE&canteen manager, tweeted to Railway Min. Was given the medicine really late: Passenger pic.twitter.com/pS7OKIZ5kb

People on Twitter were justifiably freaked out by the incident and slammed the catering services and demanded strict action. Facing severe backlash, the ministry tweeted, “Strict action taken. Catering Contract of Poorva Express has been terminated immediately.”

Many people rapped up the catering services with their sarcastic remarks:

To avoid such lizard embarrassment again , Railway should induct VEG ONLY menu 😇😂😉#PoorvaExpress

Its very small…Not expected this from India railway ..😂😂😂

Arre free me non veg mil rha hai or kya chaiye but they should fry it. @sureshpprabhu not fair.

Poorva Express;
I salute @RailMinIndia for not being racists with cockroach.excepting bugs and rats in next serving.
Thanku@sureshpprabhu

No point in giving some vague medicine to only one. The poor thing looks like it was cooked. So everyone got a bit of it.

Shame on Indian railways. Only false promises. And bullet tran??????

There should be kitchen inspection at least once in a month

Railway ki rent is sky but food and facility is this