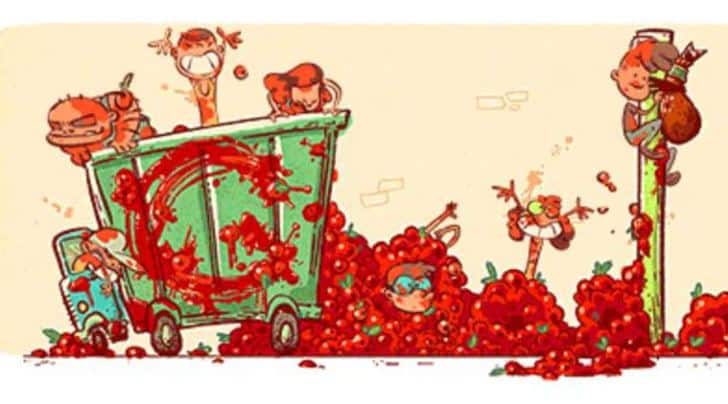 A screenshot of the Google doodle

A new Google doodle helps the world remember the 70th anniversary of the feverish La Tomatina festival, the one in Spain where people hurl tomatoes at each other for around an hour on the last Wednesday of the month of August every year. The interactive doodle has animated characters throwing tomatoes at each other in what is basically a complete splash of red.

The festival takes place in the little, quaint town of Bunol in Valencia province — a town that thousands descend upon for the annual tomato-throwing frenzy.

According to reports, the festival’s origins can be traced to sometime in the 1940s when a group of protesters had picked up tomatoes from a vegetable stand and used it to attack the police. It’s interesting to see how a rather angry protest has developed over the years into a customary, annual ritual of revelry and celebration.

This year, as the organizers mark seven decades of the event, tickets priced at 10 euros are being sold online and more than 1,40,000 kilograms of ripe tomatoes are reportedly being readied for the ritual.