I think the true value of the Galaxy A52s lies in its ability to cram in a lot of premium features at a much lower price point. Samsung Galaxy A52s is a mid-budget phone that tries to bring a lot of features that were once stapled in expensive smartphones. It’s a good thing, and the trickling down of high-end specs to mid-range phones is proof that an average user does not need to spend extra for features like IP67 waterproof, stereo speakers, and high-refresh-rate screens anymore.

But is the Galaxy A52s 5G a convincing smartphone and should you spend Rs 35,999 on this device? I tried to find the answer, and here is my take on Samsung’s latest Galaxy A-series phone.

Before you even consider this phone, keep in mind this isn’t a medium-sized device. It’s a pretty big phone with a 6.5-inch screen which many people will find absolutely normal now. I love the extra screen release estate and it’s a pleasure to type on. Of course, the only drawback with big phones is that you won’t be able to reach all four corners of the screen with one hand (unless you have very large hands).

The phone does not have a premium finish to it but I liked the simple aesthetics. The back, although made of plastic, has this soft matte finish that is pleasant to the eyes. My review unit is white in colour and it reminds me of the first-generation iPod. The build quality is good and the phone feels solid in the hands with a premium feel. 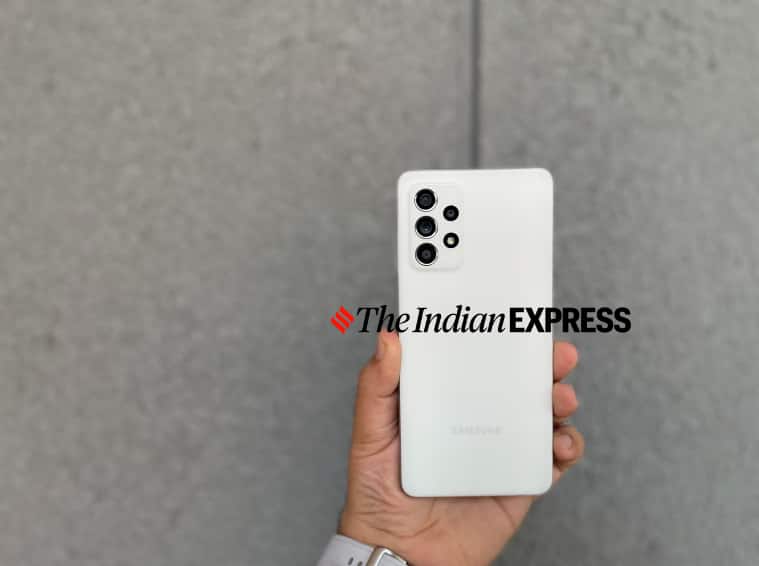 The Galaxy A52s feels “different” to hold, a departure from Samsung phones of the past. (Image credit: Anuj Bhatia/Indian Express)

I could not believe this phone still has a headphone jack right at the bottom, next to stereo speakers. Yes, stereo speakers – one on the bottom and the other in the earpiece. The speakers are surprisingly capable and offer a wide sound array.

The A52s 5G is rated IP67 for water and dust resistance and can be submerged under three feet of water for up to 30 minutes.

As I said at the beginning, the Galaxy A52s is a large phone with a 6.5-inch display. The 1080p AMOLED Full-HD has a punch hole for the selfie camera. This display is a high refresh rate and can be switched between 60Hz and 120Hz. Everything looks smooth, be it swiping between home screens, scrolling through Facebook and Twitter, or opening apps. Even games feel immersive on the 120Hz screen. In general, the display is bright, colours punchy, and watching movies on the 6.5-inch is a delightful experience. I would say the display has to be one of the best features of the Galaxy A52s. The in-display fingerprint sensor somehow surprised me. It’s fast and reliable, though my only complaint is that it’s not placed in the center of the display. The problem is with the positioning of the sensor, something Samsung should note this feedback. 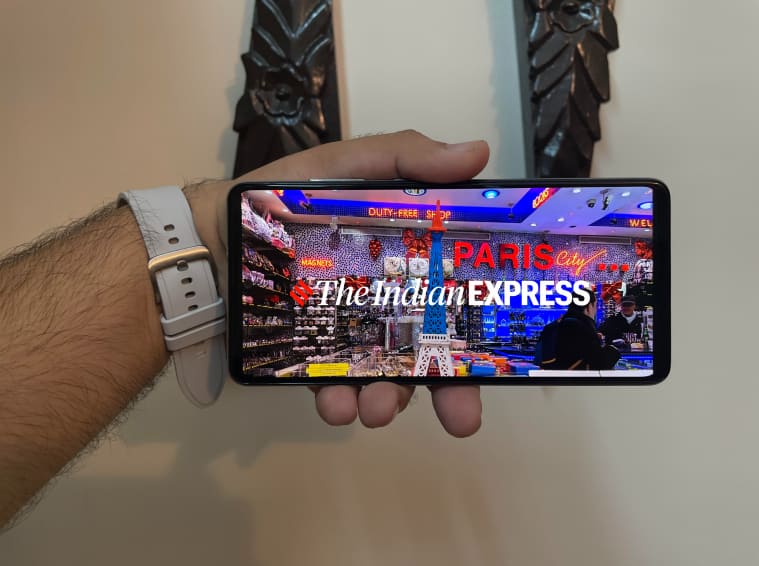 This display is a high refresh rate and can be switched between 60Hz and 120Hz. (Image credit: Anuj Bhatia/Indian Express)

The Galaxy A52s is powered by a Snapdragon 778G processor with either 6GB or 8GB RAM. The original Galaxy A52, which I reviewed earlier this year, had a Snapdragon 720G processor. Though I did not feel any major performance difference between the two processors, the Snapdragon 778G is a newer chipset (in case that matters to you). On paper, this is a mid-range chipset, and comparing it to the Snapdragon 888 is not justified. But for average users, neither benchmarks nor the onboard specs of the processor reality matter. I found the Galaxy A52s a really fast phone that can handle games, social media apps, and other intense tasks better than many other mid-range phones. My review unit came loaded with 6GB RAM and 128GB of storage. The storage can be expanded via a microSD card (up to 1TB supported), but since the tray is a hybrid —if you want to use a second SIM card, the MicroSD slot can’t be used.

With a 4500mAh battery, the Galaxy A52s can easily last more than a day. In fact, I managed to get two full days without reaching for a wall charger. So whether you do a 9 to 5 job or stay mostly out in the field, the battery life on the Galaxy A52s will last a day. And yes, this phone also supports 5G but it hardly matters right now as no Indian network operators support the next-generation wireless cellular technology. 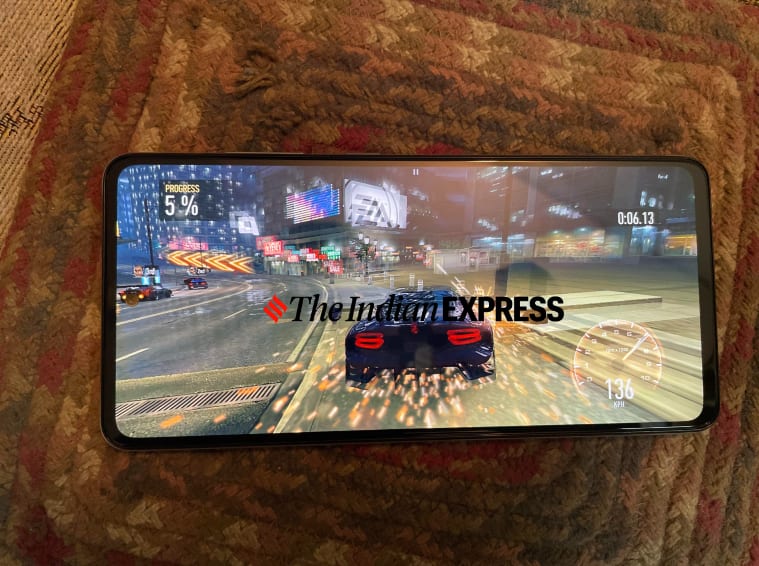 The Galaxy A52s comes with Android 11 and Samsung’s One UI 3.1 on top. The interface is clean and there is less clutter overall, though Samsung has not done much to get rid of bloatware. Just look at the preloaded third-party apps on this device…Byjus, Josh, MX TakaTak, Moj, ShareChat, and the list goes on.

The back of the phone has four cameras: a 64MP main camera with OIS, a 12MP ultra-wide lens, a 5MP macro camera, and a 5MP depth camera. Out of four cameras, only the main 64 MP camera is worthy of praise. The 64-megapixel main camera produces good shots and is capable of producing well-balanced and bright photos. Of course, colours are a bit saturated and it’s a Samsung thing. Low-light performance is good if not great. I see the Pixel 4a has an edge over the Galaxy A52s in camera performance, especially in low-light. The ultra-wide camera isn’t terrible; it takes better shots when the light is adequate. There’s a macro camera as well as a depth camera and both are very “average”. 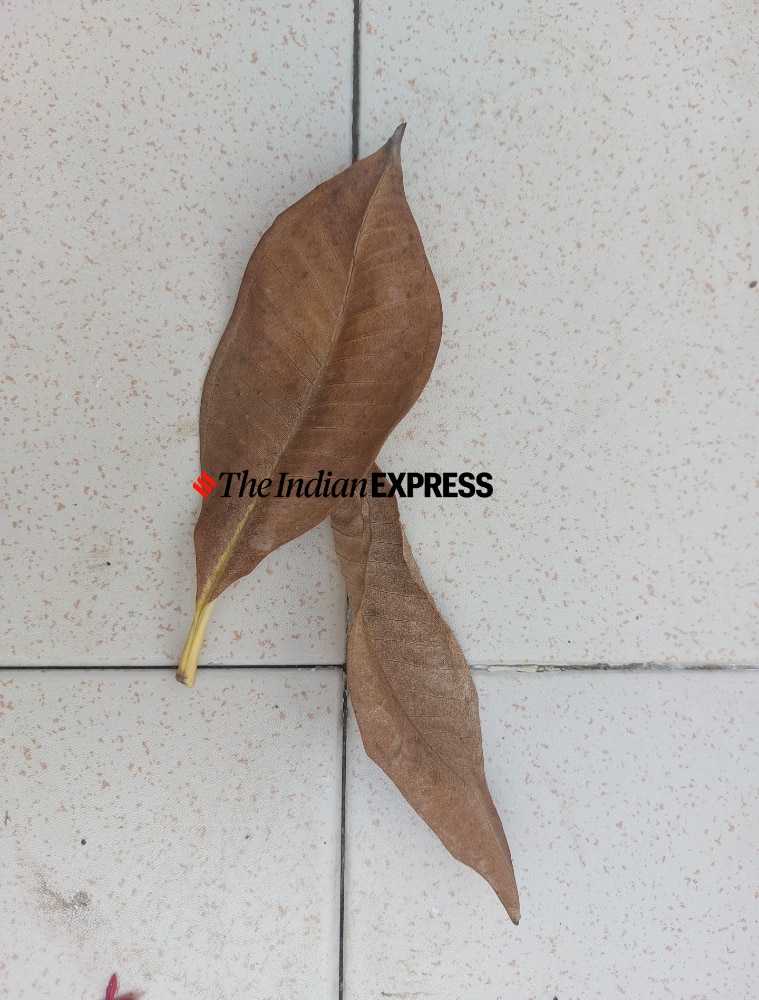 The front-facing 32MP camera is very good. In case you are interested, Samsung has added a new “fun” mode in the camera with built-in AR filters powered by Snapchat. The good thing is that you don’t need a separate Snapchat account to use these AR filters. I am not a big fan of AR filters but I know people who post at least one self-portrait of them daily using AR filters. The A52s can record 4K video and the quality is fine in good light. But the quality degrades a bit in low-light

Samsung Galaxy A52s review: Should you buy it?

I like the Galaxy A52s 5G and if you are using an old Samsung phone with weaker cameras and less superior battery, I think you can consider buying this device. I absolutely loved the display, the longer battery life, and the quality of the pictures. It’s a large phone, so be aware of that. There’s a lot to like about this phone. I think the true value of the Galaxy A52s lies in its ability to cram in a lot of premium features at a much lower price point. It’s not cheap, though.