‘Marvel’s Guardians of the Galaxy’ review: A vibrant explosion of mayhem

Guardians of the Galaxy review: This new single-player, story-focused game proves to be a redemption from the Avengers game. Read our full review below. Guardians of the Galaxy is a single-player, story-focused game that does not lock any of its content behind a paywall system. Here's our review of the game.

The last time Square Enix tried their hands on a superhero ensemble game, it met with its fair share of criticisms. For a while, the ‘Marvel’s Avengers’ game was deemed as a soulless and flawed reimagining of the characters we had grown to love through the MCU movies. From launch day, the issues just kept piling up – glitches to stability issues, the rinse-and-repeat gameplay, weird character models, and bad dialogues.

Not to mention, it followed an online GaaS (Games as a Service) model that heavily relied on monetising in-game content. So, when the trailer and other promotional material for ‘Guardians of the Galaxy’ came out, I wasn’t really wowed by it. The gameplay looked pretty similar and bland, none of the jokes landed, and it looked incredibly messy. Safe to say, I had set my expectations quite low.

How did it fare? Read on to find out.

Guardians of the Galaxy review: Story

Unlike its quote-unquote predecessor, Guardians of the Galaxy is a single-player, story-focused game that does not lock any of its content behind a paywall system; making it instantly a plus point in my book. Our story begins with a flashback sequence at the Meredith Quill residence, where our mulleted protagonist, Peter, prepares to celebrate his thirteenth birthday. This serves as a great playable backstory, giving us some insight into his origin and relationship with his mother. There are tonnes of personal items to interact with here, including his iconic cassette player, rock magazines, and an electric guitar. Our story begins with a flashback sequence at the Meredith Quill residence, where our mulleted protagonist, Peter, prepares to celebrate his thirteenth birthday. (Image credit: Screenshot from the game via Marvel’s Guardians of the Galaxy)

Back in the present, we take control of a fully grown, adult version of Peter “Star-Lord” Quill, as he wakes up from his slumber and navigates his way through the Milano (his spacecraft). Walking around the ship, we are introduced to our rag-tag team of intergalactic outlaws aka the Guardians – Gamora, Drax the Destroyer, Rocket Racoon, and Groot. The way these introductions work is subtle and are only triggered when we choose to interact with them. The game kind of assumes that you have a vague idea of who these characters are beforehand, instead of forcing exposition down our throats.

The characters in this game are not directly derived from the MCU movies or the comics. Instead, the developers have taken elements from both source materials and created their own touched-up versions. Despite that, it still manages to play into that vibrant tone and capture the quirkiness that James Gunn brought to the screen.

Star-Lord is annoying as ever, Gamora is ruthless, Drax is meat-headed, Rocket won’t shut up, and Groot is Groot. There is a LOT of dialogue, jokes, and neverending banter between the characters. Some of which are cringy, while others work just fine. 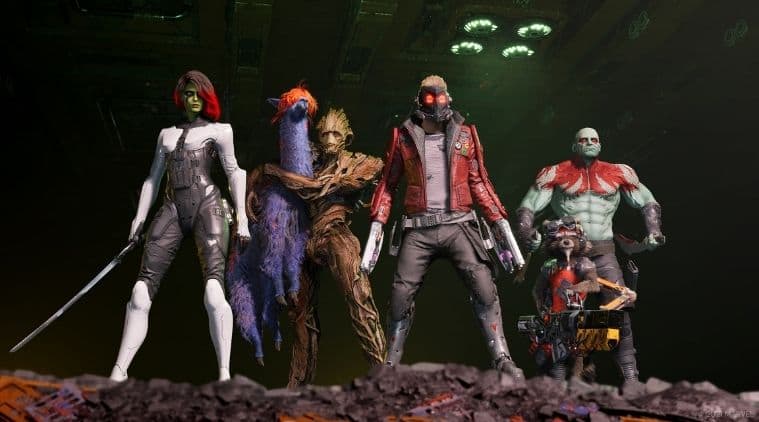 The characters in this game are not directly derived from the MCU movies or the comics. (Image credit: Screenshot from the game via Marvel’s Guardians of the Galaxy)

Coming back to the plot… Our “heroes” are on a mission to make some money, for which they head straight into the forbidden Quarantine Zone to capture a rare monster for their patron, Lady Hellbender. Things go awry and they are arrested by the Nova Corps, under the guidance of Ko-Rel. Peter, who seems to have some kind of “history” with her, manages to strike a deal to pay a huge fine in a time limit of three cycles. Being completely broke, the Guardians then attempt to scam Lady Hellbender. But as luck would have it, the plan fails and in a fit of rage, she hires the Lethal Legion to chase after them and turn their lives into living hell. From here, the story gets quite intense, fast-paced, and somewhat emotional, with plenty of twists that you’d never expect. And what aids it is the high-octane gameplay.

Guardians of the Galaxy review: Gameplay

In this game, you solely take control of Star-Lord, the team leader of the Guardians. Besides the standard movement controls and world interactions, you have a double jump ability where your jet boots propel you into the air for a few extra seconds. As part of your equipment, you have the Element Guns and a visor that highlights items of interest in your vicinity. Similar to the detective mode from the Batman: Arkham franchise. The game also features a dialogue tree system, where the decisions affect your relationship with your squad and some of the chapter outcomes. However, being a linear game, the core story remains the same and therefore makes this aspect feel a bit redundant. In this game, you solely take control of Star-Lord, the team leader of the Guardians. (Image credit: Screenshot from the game via Marvel’s Guardians of the Galaxy)

You are in complete control over your team, and the game constantly reminds you of that. During combat, it’s crucial that you make strategic decisions and order your crew to use their special attacks. Sure, you can try holding the shoot button onto your foes for who knows how long, but it just isn’t ideal. The enemies here are massive bullet sponges and will absorb hits for days. Utilising your teammates, however, ensures extra damage, thereby maximising your chances of winning. Not to mention, the movesets are extremely creative and in line with their personalities.

Gamora is agile and a skilled swordmaster, while Drax pounds and pummels his way through enemies. Groot assists in battles using his extendable roots, and Rocket is practically an evil genius with an arsenal of high-tech gadgets at his disposal. You can even combine their attacks for added effect and synergy. For example – Once Groot entangles a group of enemies, Rocket can chuck an explosive into the middle and damage them all at the same time. As Star-Lord, you can then fly above and unload your pistols to finish off the remains. The possibilities are endless.

Now, despite its merits, the gameplay does get a little repetitive as time passes. So, if I had to revisit this game at some point, I would definitely turn down the difficulty settings. As Star-Lord, you can strategise and cycle between teammates to deal extra damage. (Image credit: Screenshot from the game via Marvel’s Guardians of the Galaxy)

As you play the game, you earn XP, which when totalled up to 1000, grants you a skill point. These points can then be used to unlock more abilities for yourself and your team, to add more variety to your fights. Personally, I would recommend you to spend them on Rocket and Groot’s skill trees, for two main reasons.

One, they have amazing synergy. And second, their final abilities are too overpowered. Rocket pretty much whips out his entire collection of machine guns, rocket launchers, and grenades to deal devastating damage to his enemies. Groot, on the other hand, can resurrect you when you die. I would recommend you to spend XP on Rocket and Groot’s skill trees, for two main reasons. (Image credit: Screenshot from the game via Marvel’s Guardians of the Galaxy)

Additionally, you can unlock perks, which are nothing but personal gadget upgrades that can be made by accessing workbenches within the game. For this, you will need to have accumulated enough raw materials or ‘components’ from around the world. Playing through the chapters, you also uncover an array of elemental attacks that add a whole new dynamic to your gameplay. Depending on the enemy type, you can switch between Ice, Lightning, Wind, and Plasma shots to gain upper hand. Besides that, there’s plenty of puzzles that you can solve by asking for favours from teammates or using the elemental shots I just mentioned.

Playing through the chapters, you also uncover an array of elemental attacks that add a whole new dynamic to your gameplay. (Image credit: Screenshot from the game via Marvel’s Guardians of the Galaxy)

Now, as great as all of this sounds, there are issues. At this stage, the game is riddled with a lot of bugs ranging from screen flickering to moments where the cutscenes won’t trigger. Other times, everything goes silent and you can phase through walls, or the buttons aren’t responsive, especially during quick-time events. During combat, if you fly or get slammed into a rock wall, you get stuck and are forced to spam the jump or dash buttons to get out. You can also pilot the Milano on occasion, but it only exists for added flashiness, as evidenced by the awkward control scheme that’s barely been tested.

Guardians of the Galaxy: Graphics and Audio

Visually, Guardians of the Galaxy looks breathtakingly beautiful. All the locations, be it the interiors or exteriors are heavily detailed and ooze with personality. As you embark on this interstellar journey, you come across countless vivid monsters and exotic vegetation, each more creative than the last. You will find details where you were least expecting to see.

For instance, on the Milano, each character has their prescribed quarters that’s been ornamented based on their nature. Drax has a giant monster skull on his wall, while Gamora’s room is adorned with purple curtains and lighting. If it wasn’t for the constant chattering between my teammates, I could see myself getting sucked up into the atmosphere. Also, a special shoutout to whoever worked on Rocket Racoon. His eyes and fur look so gorgeous. All the locations, be it the interiors or exteriors are heavily detailed and ooze with personality (Image credit: Screenshot from the game via Marvel’s Guardians of the Galaxy)

I have mixed feelings for the music in this game. On one hand, you have this collection of licensed classic tracks ranging from the Rick Roll song to ‘I Ran’ by Flock of Seagulls, which is fantastic, and in tune with Peter’s identity. You even get an interactive boombox on the ship.

But then, you have this series of heroic music that plays into the campy Marvel formula, making it somewhat forgettable. And this isn’t entirely the fault of Richard Jacques’ composing, but rather the fact that it gets overshadowed by the non-stop bickering between your teammates. So, you only hear it in spurts. The voice acting, which is phenomenal by the way, feels a little overwhelming. Especially during combat sequences, where you have the background music, impact sounds, characters grunting, and incessant banter, all playing at the same time. I have mixed feelings for the music in this game. (Image credit: Screenshot from the game via Marvel’s Guardians of the Galaxy)

Guardians of the Galaxy review: Verdict

Overall, Marvel’s Guardians of the Galaxy is an exciting, single-player joyride that proves to be a massive redemption from the Avengers game. It’s got a solid narrative that manages to keep you invested throughout its otherworldly craziness. Couple that with the fast-paced combat that keeps you on the edge of your seat, and you have what I would call a fairly decent game. The game does suffer from occasional hiccups such as repetitive gameplay, too much talking, bad jokes, and glitches that are soon to be fixed. But it’s still a fun, memorable experience.