Halo Infinite review: A satisfying jumpstart to the franchise

Halo Infinite proves to be the finest entry into the franchise since 343 Industries took over in 2011. Twenty years since its inception, and “Halo” still continues to be one of the biggest names in gaming. A sprawling legacy as such can be difficult to uphold, especially when there is a passionate fanbase clinging to you for the next big offering. And thus came the day for Halo Infinite’s official reveal, where it all came crumbling down. Just as the trailer went live, the game became a subject of mockery, with many pointing out how outdated and visually appalling the graphics looked. From embarrassing clips and screenshots to the birth of the infamous ‘Craig’ meme, its debut was an absolute disaster.

But, Microsoft kept a level head throughout, and being the good sport that they are, delayed the launch by a year to fix the issues. Was the extra time enough to earn them a redemption arc, though? Let’s find out.

Following the lacklustre campaign of Halo 5: Guardians, developer 343 Industries had some heavy course correction to do here. So, this new chapter not only serves as a sequel, but also a soft reboot to try and retcon previous issues. To make things easy for newcomers, Halo Infinite kicks off with a cinematic cutscene of our Master Chief as he gets pummeled by Atriox, the brute warlord of the Banished. After suffering a humiliating defeat, we are hurled into outer space to float around in the emptiness. That is until a UNSC pilot codenamed ‘Echo 216’ rescues us six months later. As promised by the developers, the moment Master Chief opens his eyes, we get to see a new, humane side of him. A sense of sadness and disbelief is felt in his voice following his AI partner, Cortana’s deletion. And the game tries to hammer in that “humanity” aspect from the first mission itself, where we are forced to kill a group of small, adorable aliens as they squirm and beg for mercy.

During these sequences, there is no background audio either, adding to the pain and deeper connection between the player and Master Chief. Due to the slight sluggishness in his voice and overall movement, you can tell that he’s done with hurting others but has no other option. He is a genetically engineered supersoldier, after all, a pure killing machine. But in this iteration, his emotions start clouding his judgements.

Stepping into the ancient ringworld of Zeta Halo, our first objective is to retrieve “The Weapon,” an AI companion that imitates Cortana in many ways. During her introduction, there is a lot of exposition dump from previous Halo games, which is something that annoyed me a little bit. Not because it was obnoxious or anything, but it brought up a lot of material that could seem foreign to new players. So, the Chief finds out that Cortana is still alive, though as visions or fragments of residual data. Teaming up with his new AI, he then embarks into the vast terrains to find those missing pieces, and if possible, bring her back whole. The Master Chief teams up with his new AI, The Weapon, to find the missing pieces of Cortana. (Screenshot – Halo Infinite)

The Weapon is an equally well-meaning and interesting character, though. You can see her constantly bantering with the Chief, whipping out cool one-liners, and acting clueless on purpose at times. She offers solid advice on the arena and seems genuinely concerned about his well being.

The script does a great job of establishing their character dynamic as well, where at first, the Chief is a bit closed off and sees her as just another AI. But as the plot progresses, their bond strengthens, and things start getting personal where he can’t help but share his feelings. A menacing hologram of Escharum appears every now and then to taunt you. (Screenshot – Halo Infinite)

And then we have Escharum, the prime antagonist and new leader of the Banished. On our journey, we would get these occasional holographic calls where he menacingly stares down and taunts us in a deep baritone. Every monologue of his is superbly delivered, and what aids it is the underlying respect and admiration he has for the Chief as a fellow warrior. He knows details about your past and insecurities, using which he mocks you to add that touch of psychological warfare. And it never gets old, either. The more he trash talks, the more motivated you get to drag his worn-out carcass across the battlefield.

Campaign: Halo Infinite maintains the same smooth, addictive gameplay as its forerunners with a dash of fresh elements. First, we have the Grappleshot which is a total game-changer, offering so much control and variety on the field. And the way it works almost makes you feel like Batman. Though, the Zack Snyder kind, you know, with the guns and everything… You get the point. The grappleshot lets you cling to an enemy and then zip into them to land a finishing blow. (Screenshot – Halo Infinite)

The hook is helpful for speedy traversal across the map and even works as a great speedrunning tool. Anytime you feel like not wanting to fight a generic mob, you can cling onto a wall surface and swoop past them to reach the next level. And if you feel like getting your hands dirty, you can yank out-of-reach weapons and explosive barrels, making for a dynamic playstyle. Latching onto enemies is also a fun mechanic, where you zip headfirst into them and land a devastating blow.

Other additions include the Shield Core which is a passive armour ability, and the Drop Wall that pops a shield to block incoming projectiles. For tactical play, you have the wrist-mounted Threat Sensor which scans and highlights nearby enemies and key items. These utilities are doled out one at a time as you play through the campaign. But in most cases, you might not even use them. The grappling hook and the slew of collectable weapons are enough to keep you occupied for hours. Despite having a vast map, the “open-world” aspect is heavily underused, where every task in the outside world is boring side missions. (Screenshot – Halo Infinite)

343 intends to take this franchise in a new direction, as evidenced by its vast semi-open world map. But, it is severely underused. Zeta Halo’s landscape, for the most part, feels empty and has nothing to do with the main plot. Every task in the outside world is mind-numbingly boring side missions, where you’re asked to liberate an outpost or save a group of soldiers from evil mercs. Their mechanics aren’t different from the ‘Far Cry’ games either, where doing so unlocks fast travel points and illuminates icons of interest on the map. Every story mission, however, is set within closed corridors and rooms, making the whole “open-world” aspect feel redundant.

“Well, you can just avoid doing them, can’t you?” – Nope. Up until now, Halo never had an upgrade system, and to use it, you have to gather Spartan Cores. These components are spread all across the map, and finding them can be a real chore without knowing their approximate locations. 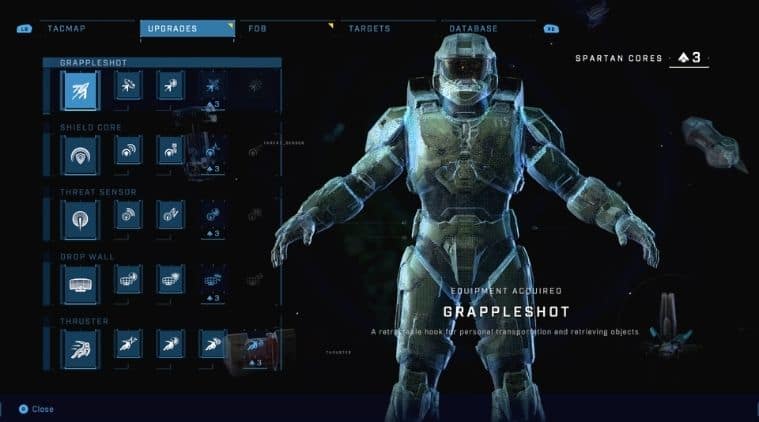 But, if you complete those mundane side missions, the sites will reveal themselves on your map. It’s a long and tiring process, but there is a solution. The game lets you change difficulty levels whenever you desire. So, before doing one of these missions, you can dial it down to the lowest setting and quickly be done with it. As for the upgrades, they are definitely worth it. Focus on the grappleshot upgrades first, as they grant some stun effects and shockwave damage. Then go for the shields, which help you last longer against strong enemies. 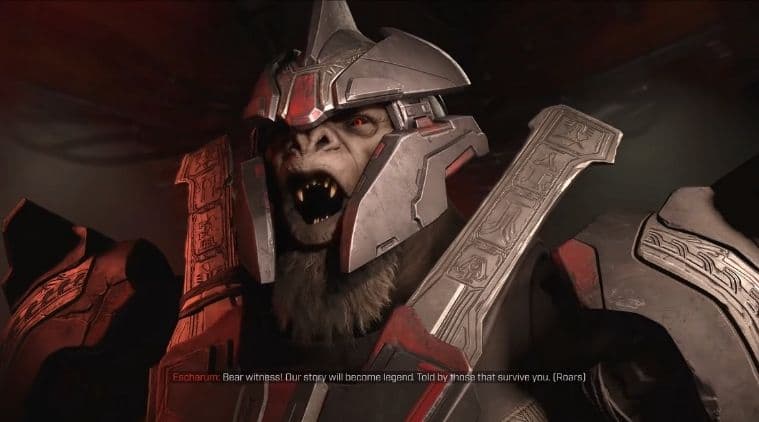 The boss fights are neatly designed as well, where it forces you to be agile and use every ability at your disposal. Leading up to the face-off, you think Escharum is just all talk and no show. But, the game subverts your expectations and delivers an insanely challenging battle. He takes you one-on-one and is so confident in his prowess that he lets you try out every firearm in this stage. As he stomps in your direction, you panickingly peek corners and chip away. Make one mistake, and it will drastically reduce your health bar, making for a rewarding experience.

Multiplayer: Having never played the original Halo multiplayer, I was led to believe that its hype was purely nostalgia-driven. So, when Xbox released the game for free, I had to get into the action, and oh boy, was I missing out. The gameplay is chaotic, fast-paced, and manages to keep you moving. Besides the standard gunfights, you can also pick limited-use abilities that are scattered across the map, allowing for some wild manoeuvres. The introduction of ‘sliding’ is also a really cool mechanic, giving a quick burst of speed and the ability to dodge bullets. My only gripe with the multiplayer segment would be its lack of content. Right now, there’s only a handful of game modes and maps, and they can get repetitive over time. But, the studio has stated that it will add more playlists and even a campaign co-op mode in the future, which is quite reassuring.

Following the initial backlash, 343 Industries actually managed to pull through and deliver a strong visual upgrade. The newly added dynamic lighting makes the colours pop, resulting in the heavenly scenery of Zeta Halo. Every mountain range, streams, and valleys are a sight to behold, and sometimes you’ll even encounter tiny creatures scurrying around the map. The textures also see an improvement, where the Master Chief’s suit doesn’t look overly polished anymore. It is gritty, full of battle damage and scratches that shine when light is cast upon them. Tire tracks on mud also look realistic and splatter when you drive through. 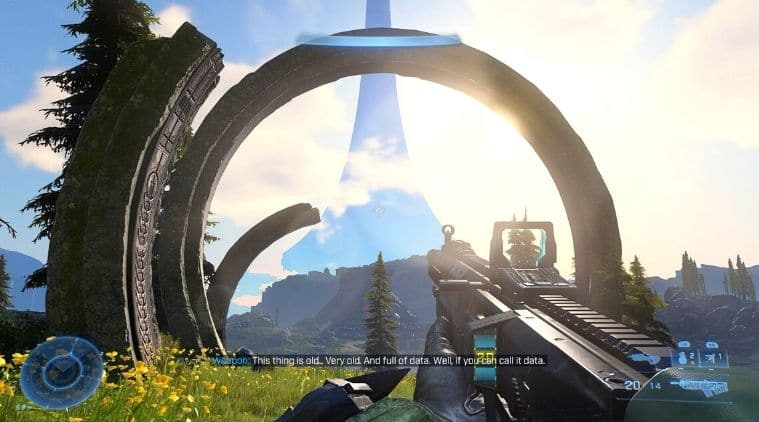 Thanks to the dynamic lighting, the surface of Zeta Halo looks heavenly, where every location is a sight to behold. (Screenshot – Halo Infinite)

Halo Infinite greets you with its iconic, goosebump-inducing chant that evokes sweet nostalgia. It’s an established part of their branding that has to be left untouched at all costs. In fact, a good chunk of the score here is a callback to the classics, but with its own unique spin. The new composers – Curtis Schweitzer, Gareth Coker, and Joel Corelitz, have created faithful adaptations while exploring some fresh sounds for this instalment.

Keeping in touch with the game’s serene tone, the music heavily relies on slow violin and piano notes. But during fight sequences, it builds to a thunderous, bass-heavy theme that creates a sense of urgency. The voice acting is phenomenal as well, with key highlights being the orcs’ hilarious dialogues.

Overall, Halo Infinite proves to be the finest entry into the franchise since 343 Industries took over in 2011. Despite heading into a new path, the game still retains the core elements that earned its decades-spanning reputation. With a well-paced story that touches upon the Chief’s innermost fears and an even glorious cliffhanger, it manages to build excitement for the next chapter.

The addition of new gadgets has also helped strengthen the multiplayer segment, offering an even ground for both veterans and newcomers. All of this, combined with the quick, positive response from the development team has earned Halo Infinite its place among the best titles this year.