If you are looking to upgrade from an Echo device without a screen or want to get your first Alexa speaker, find out in our review if the Amazon Echo Show 8 should be that device. Here is our review for the Amazon Echo Show 8 (Image source: Nandagopal Rajan)

Today morning I woke up and asked the great Amitabh Bachchan for the time. As a five-year-old, I would have been more than happy to have accepted this as a success metric for myself 35 years down the line. But then millions of Indians can now potentially do this by just replacing the Alexa smart assistant on their Amazon Echo devices with the ‘Amit Ji’ wake word.
So when I tested the new Amazon Echo Show 8, which has added itself to the ever-widening pantheon of Alexa devices, I chose to play to my fantasies by enabling the ability to have Big B as my personal guide.

It’s quite hard to keep pace with Amazon’s product launches because there are so many updates and versions coming for everything every other quarter. The Echo Show 8, for instance, is a larger device with an 8-inch screen and a better camera. So the Alexa part of the Echo Show 8 stays more or less the same, except for the new Amit Ji wake word that has been available for Echo devices in India for a few weeks now.

You can do everything you could do before with an Echo device that had a screen. But then this has a larger screen. 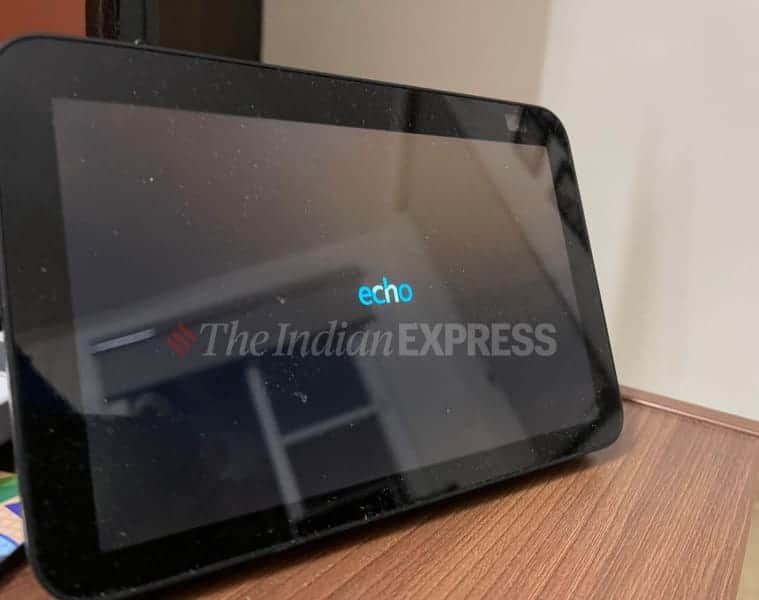 Compared to the Echo Show 5, the Show 8 has a larger 13MP camera on the front (Image source: Nandagopal Rajan)

I placed the Echo Show 8 next to my bed and was soon watching old Malayalam movies and new shows on Amazon Prime. I am not sure this is a habit I want to inculcate, but the temptation is too much to overlook. The HD screen makes it a decent display to watch short video content and it’s a soothing experience to have great artwork by the bed. I doubt if I will be able to watch anything really long on this screen, but I’m sure my 10-year-old will disagree.

Pro tip: At night, the screen can be a bit too bright for those like me who struggle to sleep well. So you might want to adjust the screen if using it in your bedroom.

Also, the audio quality is much better than before thanks to the larger form factor and I soon switched to listening to songs before sleep. Since you can pull out any song, or podcast, using Alexa, this was a better bedtime activity than watching a screen. However, I did notice that at higher volumes the Show 8 ended up giving my bedside table a bit of a shiver and so I preferred to keep it low. Compared to the Echo Show 5, Show 8 has a larger 13MP camera on the front. The lens also comes with a physical slide cover so that you can keep it shut most of the time. This is a good device to use as a security camera — keeping an eye on your room when you are not there using the Alexa app or even another Show device that you might have at home — recommended if you are using this to monitor babies. A feature that is especially useful when you have small kids at home.

The camera also makes the Show 8 a better device for video calling and I am seriously thinking of gifting one to my parents so that they don’t have to struggle with WhatsApp for daily sessions with my son. Set this up in their house and all I have to do is say “show me my parents’ house” to see what’s up thousands of kilometres away.

The Echo Show 8 can also be a smart hub for all compatible IoT devices in your home and you can control your Philips Hue lights and Echo plugs with just your voice. While you can ask Alexa to play any content from a plethora of apps and showcase one of its many skills, now Amazon also lets you erase all queries with just a voice command. This should give some peace of mind to those who are extra cautious about privacy.

For those looking to upgrade from an Echo device without a screen or those finally picking up their first Alexa device, the Echo Show 8 makes great sense. It is, of course, the smart assistant that you want Alexa to be, but it also has a screen that can add a serious entertainment quotient to wherever you place this Echo device. At Rs 11,499, the Echo Show 8 is a good deal for sure.