With ISRO partnership and new rules, MapmyIndia hopes to take on Google Maps’ monopoly with an Indian alternative

Among the biggest beneficiaries of the move will be MapmyIndia, one of India’s oldest players in the cartography space, which has already announced a tie-up with ISRO to create new mapping products. 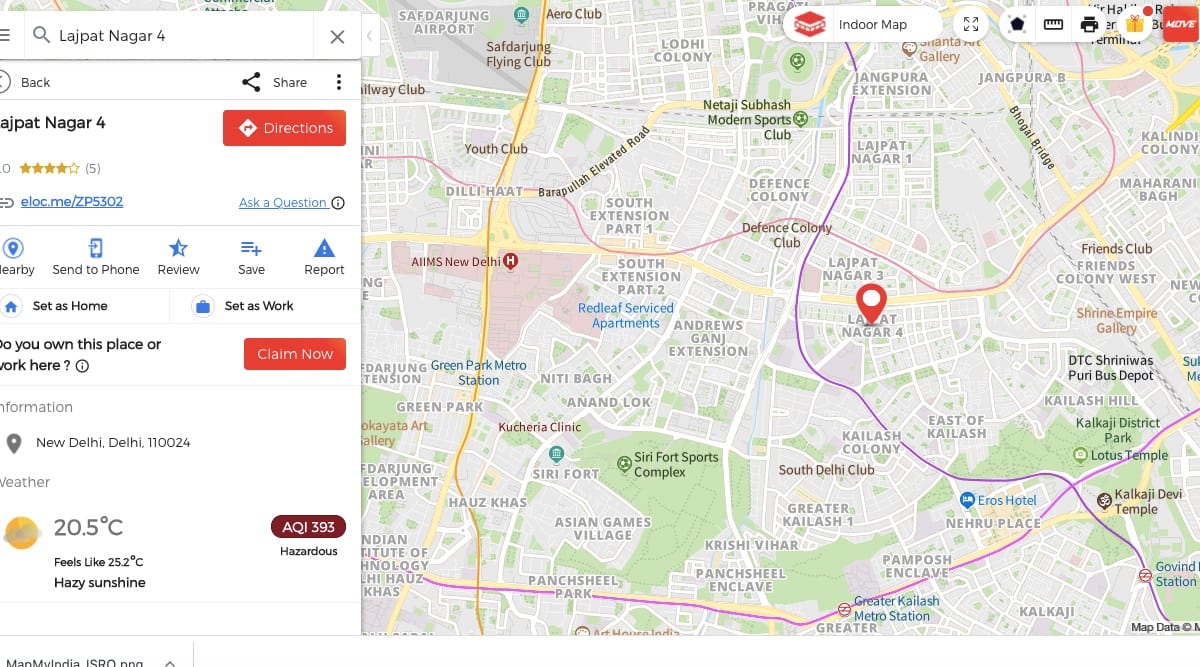 With the government finally deregulating the use of geospatial data, Indians can look at local maps that are much more detailed with realtime updates on what’s happening on the ground. Among the biggest beneficiaries of the move will be MapmyIndia, one of India’s oldest players in the cartography space, which has already announced a tie-up with ISRO to create new mapping products.

“ISRO’s imagery gives a bird’s-eye-view of how India looks from above. But it also has a huge set of imagery like weather data and landslide information. When all of this gets combined, it is a more powerful and indigenous alternative to Google Maps,” MapmyIndia CEO Rohan Verma tells indianexpress.com over a call.

The ISRO partnership will plug MapmyIndia’s lack of satellite imagery and also give it access to “map-based analytics and insights about weather, pollution, agricultural output, land use changes, flood and landslide disasters etc”. For a company that has been in the mapping business much longer than Google, it will be a huge fillip to take on the global leader.

“Today, because of the situation with Google Search, Android and Play Store, and then Google Maps being pre-installed, people just see that (Google Maps) as the only mapping option,” explains Verma, who now drives the business set up his father Rakesh Verma 25 years back — Google Maps came nine years later.

The tie-up with ISRO, coming at a time when there is increased focus by the government on the ‘Aatmanirbhar Bharat mission’, Verma hopes will give it the impetus to make a dent in the consumer mapping space. The company which claims to cover 7.5 lakh villages, 7,500 towns at street and building level and over 66 lakh road kilometres across India, has so far focused on its 5000-odd enterprise customers.

“Almost all the vehicle manufacturers who come with built-in navigation systems are using MapmyIndia. Some of the top app developers like Paytm, Amazon, Flipkart, even Apple and Facebook are using our maps,” explains the Stanford graduate, adding that despite this they are not that visible, especially to end consumers. Its consumer product, an app called ‘Move’ that which provides real-time traffic updates and navigation, has a million downloads on the Google Play Store — Google Maps has 2 billion installs across the world.

Verma is confident about his maps, which go down right to the house address and even building level. “When we give you the navigation, it’s not just based on real-time traffic, but also looks at road safety or road hazard conditions and alert you of potholes and obstacles like a fallen tree,” he says, adding there are more hyperlocal features on offer. A lot of this data comes in realtime from being the largest GPS tracking service provider in India, catering to most taxi fleets and large transport companies. In contrast, Google Maps relies on users having their Maps and navigation turned on to collate the real-time traffic updates.

Verma knows breaking Google’s monopoly won’t be easy, but adds that many things have changed in the past year, which has given him more confidence of gaining ground in the consumer space. “Why we now believe this monopoly can be broken is because of the government’s vision of Atmanirbhar Bharat,” he says, adding that people now know the Indian alternative they wanted is possible. MapmyIndia’s Move app was the winner in the others category of last year’s Aatmanirbhar app challenge. There was no dedicated category for Maps.

MapmyIndia’s Achilles heel so far was the lack of satellite imagery. ISRO will bring in that layer now. Verma says till now it was not a level playing field as only ISRO had this data for India. The new rules make these guidelines, set in place for national security, obsolete.

Companies will no longer need prior approvals, security clearances and license for collecting preparing and disseminating geospatial data and maps of India. The guidelines acknowledge that “locally available and locally relevant maps and geospatial data would also help in improved planning and management of resources”.

These complicated regulations were one of the main reasons for MapmyIndia focusing on business customers. “We were hobbled by archaic regulations. We knew we had built a strong product, so took it to the B2B world,” says Verma, highlighting how his company had GPS navigators way back in 2007. “The device cost Rs 20,000 and people loved it. We were first to launch this. We sold a few lakh of these.” Once smartphones became popular, these became almost redundant for consumers.

“We focused on building a sustainable business and went to vehicle manufacturers. We are valued at $255 million and have built a war-chest. We have built a strong tech, and are monetising it well. From our accruals, we are looking to target the consumer,” Verma underlines.

Verma knows that at the moment Google has an advantage given the scale of users, but he hopes the new impetus can help them gain 20 to 30 million users. “Breaking a Google monopoly is ridiculous. No one should really try to. We have so much confidence in our product that in the right situation we should be able to take it on,” he says. “No monopoly is good for anybody, except for the monopoly, of course.”

‘Can’t be doing that as captain’: Virat Kohli criticised by former England players for ‘intimidating’ umpire