What is Apple Music Sing? The Karaoke mode explained In order to access Apple Music Sing, you need to have a compatible iPhone, iPad or Apple TV 4K box and be an Apple Music subscriber. (Image credit: Apple)

Apple is adding a new ‘Karaoke mode’ to Apple Music, allowing millions of users of the streaming service to perform duets, a group retention or solo if you are feeling a little Taylor Swift-esque without the need to leave your living room. It’s a pretty neat feature that will work on the iPhone, iPad and the new Apple TV 4K, turning your Apple device into a Karaoke machine. The timing of the Apple Music Sing is interesting. Not only do people spend time together with their families during holidays but Apple is also going against popular Karaoke apps like Smule with Apple Music’s new Karaoke mode. We explain the new Apple Music Sing ‘Karaoke mode.’

When will I be able to use Apple Music Sing?

Apple says the new ‘Karaoke mode’ for Apple Music will be available later this month. We, however, have been to try the Apple Music Sing on our iPhone 14 running the beta version of iOS 16.2. It’s a matter of time before Apple starts rolling out iOS 16.2 to the general public in a matter of days.

Which devices will Apple Music Sing work on? 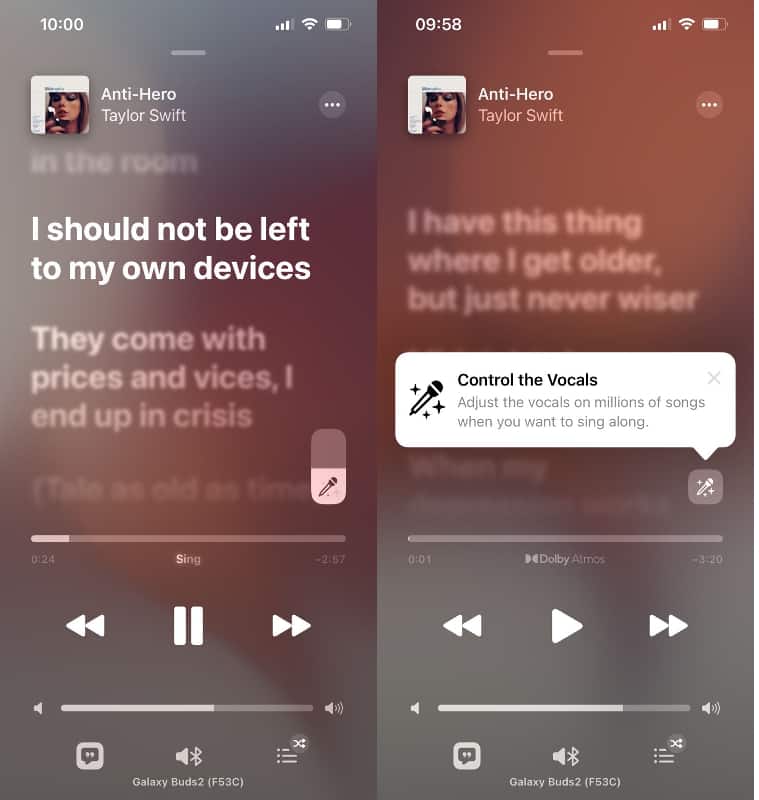 How to use Apple Music Sing karaoke feature in iOS 16.2

*On your iPhone, fire Apple Music and find a song you want to listen to

*Once you start a song, tap the lyrics button (quotation mark icon) in the bottom left corner

*After tapping the mic, Apple Sing is turned on

*Tap the Sing icon to turn the feature off

Also read |Apple iOS 16.2 beta is here: What’s new and how to install?

How does Apple Music Sing work?

The Apple Music Sing is a major update to its popular lyrics function. So those who are familiar with Apple Music’s lyrics feature, they will find the new Sing feature even more useful. The Music Sing mode lives within Apple Music’s main lyrics section. Music Sing is easily enabled by tapping the microphone icon in a song’s lyrics view, but right now, it’s limited to “tens of millions” of songs in the Apple Music catalogue. We were able to use the Music Sing feature with Taylor Swift’s “Anti-Hero” but as mentioned earlier, the feature currently works with only a few songs available on Apple Music. At launch, Apple Music will launch 50 playlists filled with the best anthems, duets, and choruses sung by revellers around the world.

The Music Sing mode highlights the lyrics at the exact moment they appear in the songs, and users can control the primary vocal’s volume. Users have the option of singing solo or along with the original artist. And when singing as a duet or with background singers, Music Sing has background vocals and duet view. It also has the ability to show where the background vocal lines are, and there is a way, in duet view, to put multiple vocalists on opposite sides of the screen making multi-singer songs easier to perform.