Twitter sued for mass layoffs by Musk without enough notice

Twitter intends to start cutting staff Friday, the company said in an email to employees. Twitter Inc. was sued over Elon Musk’s plan to eliminate about 3,700 jobs at the social-media platform, which workers say the company is doing without enough notice in violation of federal and California law.

Twitter intends to start cutting staff Friday, the company said in an email to employees. Musk plans to get rid of half the workforce, making good on plans to slash costs at the platform he acquired for $44 billion last month, people with knowledge of the matter have said. 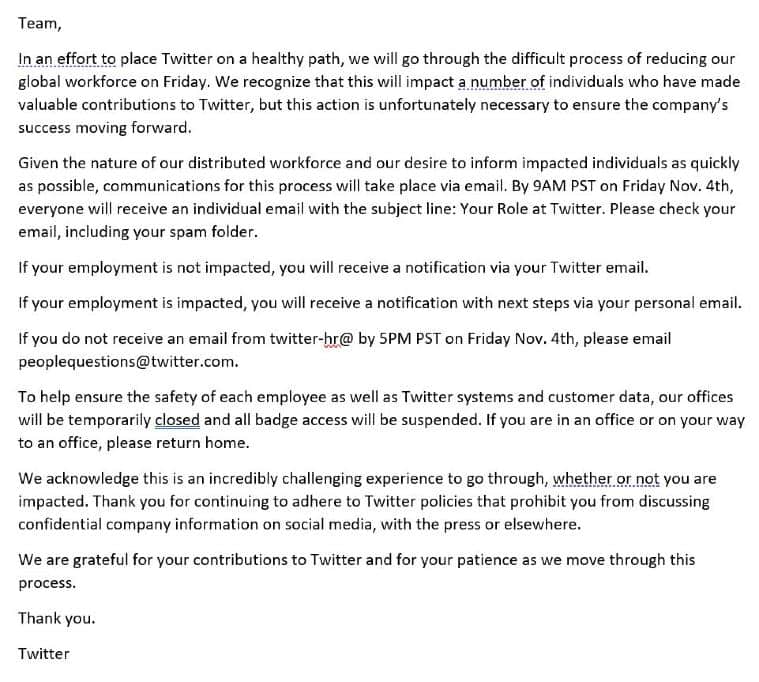 A screenshot of the letter sent to Twitter employees about their employment status.

The lawsuit asks the court to issue an order requiring Twitter to obey the WARN Act, and restricting the company from soliciting employees to sign documents that could give up their right to participate in litigation.

“We filed this lawsuit tonight in an attempt the make sure that employees are aware that they should not sign away their rights and that they have an avenue for pursuing their rights,” Shannon Liss-Riordan, the attorney who filed Thursday’s complaint, said in an interview.

Liss-Riordan sued Tesla Inc. over similar claims in June when the electric-car maker headed by Musk laid off about 10% of its workforce.

Tesla won a ruling from a federal judge in Austin forcing the workers in that case to pursue their claims in closed-door arbitration instead of in open court.

Musk described the Tesla lawsuit as “trivial” during a discussion with Bloomberg Editor-In-Chief John Micklethwait at the Qatar Economic Forum in June.

“We will now see if he is going to continue to thumb his nose at the laws of this country that protect employees,” Liss-Riordan said of Musk. “It appears that he’s repeating the same playbook of what he did at Tesla.”