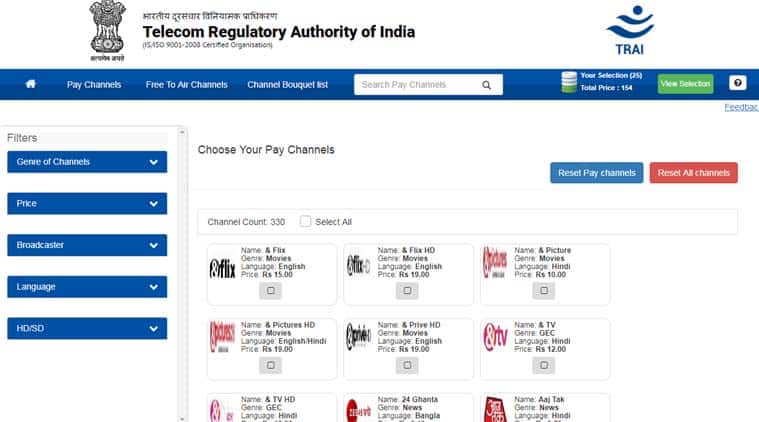 The Telecom Regulatory Authority of India (TRAI) has passed a new regulation for the television and broadcasting sector, which will come into effect on February 1, 2019. January 31 is the deadline for all companies to comply to the regulation.

With just a week left for the deadline, TRAI has launched a ‘Channel Selector Application‘ to help users figure out their 100 or more channels for their cable TV or DTH connection, and understand the new cable TV Bill and rules better.

The new rules have caused considerable confusion among users as well, with regard to how their television bills will be impacted and exactly how they can choose their channels. This tool is supposed to help subscribers choose their pack of 100 channels or more.

With TRAI’s new rules, customers have the full freedom to select television channels, which they wish to watch every month, rather than being bound by packs created by the DTH companies or cable operators.

TRAI says this particular channel selector application will help users “optimize their selection and inform them about the Maximum Retail Price of each and every channel.

After a user has decided their television channels, they will then need to go to the website of their TV service provider and inform them of the choice or get in touch with the local cable operator.

When you first start with TRAI’s Channel Selector application, it will ask you your name, state, languages, and interests in terms of television channels. You can choose not to give your name, but languages and channel interest will help the application determine what kind of channels you might watch.

After it has all this information, TRAI’s application creates a pack of 100 channels for you depending on your tastes. You can choose to reset all channels and create your own pack from scratch. TRAI will also let you choose from High Definition (HD) or Standard Definition (SD) content. Remember each HD channel in your pack of 100 counts as 2 SD channels.

As a user selects the channels, the MRP will be updated in the Top-bar. If you select a free channel and inclusion of this channel does not affect your network capacity fee of Rs 130, then the value will not change.

However, if you add a pay channel, then the value will increase by the price of the additional channel you add to the list.  The application has list of all bouquets by broadcasters, paid channels, free channels for users to choose from and create their pack.  It is a comprehensive list, though for users it will take some time to sit and figure out all their channels.

TRAI says a provision has also been made to download or take print out of your channel selection. Users can then rely on this list while selecting channels with their DTH or cable company.

How will TRAI’s new rules for cable, DTH work

The TRAI application explains that from February 1, 2019, a user’s bill to their DTH or cable operator will have two components.

The first one is Network Capacity Fee (NCF), which will be the monthly rental charge. This is capped at Rs 130. TRAI says this “is like a rental charge of the TV connection to your home.”

The other is the price of any pay channels that one selects in their pack of 100 or more TV channels. Keep in mind there’s 18 per cent GST as well.

To give a hypothetical example, if a user chooses 100 channels in their monthly pack, out of which 30 are paid and the total cost of these 30 paid channels is Rs 60, then their bill comes to Rs 130 (this is network capacity fee) + Rs 60 for the paid channels + 18 per cent GST.

TRAI explains users can select any Free To Air (FTA) channel, pay channel or a bouquet(s) of pay channel as per their choice.

TRAI also explains that its Channel Selection tool shows the MRP of all paid channels in rupees per month. A user does not have to pay any extra money for free channels. There 534 free channels.

Customers can also go to channel #999 on their set-top box and check for details on the new plans from their respective DTH, cable operator. Other than Tata Sky, nearly all cable and DTH companies like DishTV, Airtel Digital TV, Hathaway, etc have information on their website about the new channel prices, bouquets, how to choose pack of 100.

It should be noted that Tata Sky and others, including Airtel, have a case filed against TRAI in Delhi High Court against the new rules. The case will be heard on January 28.